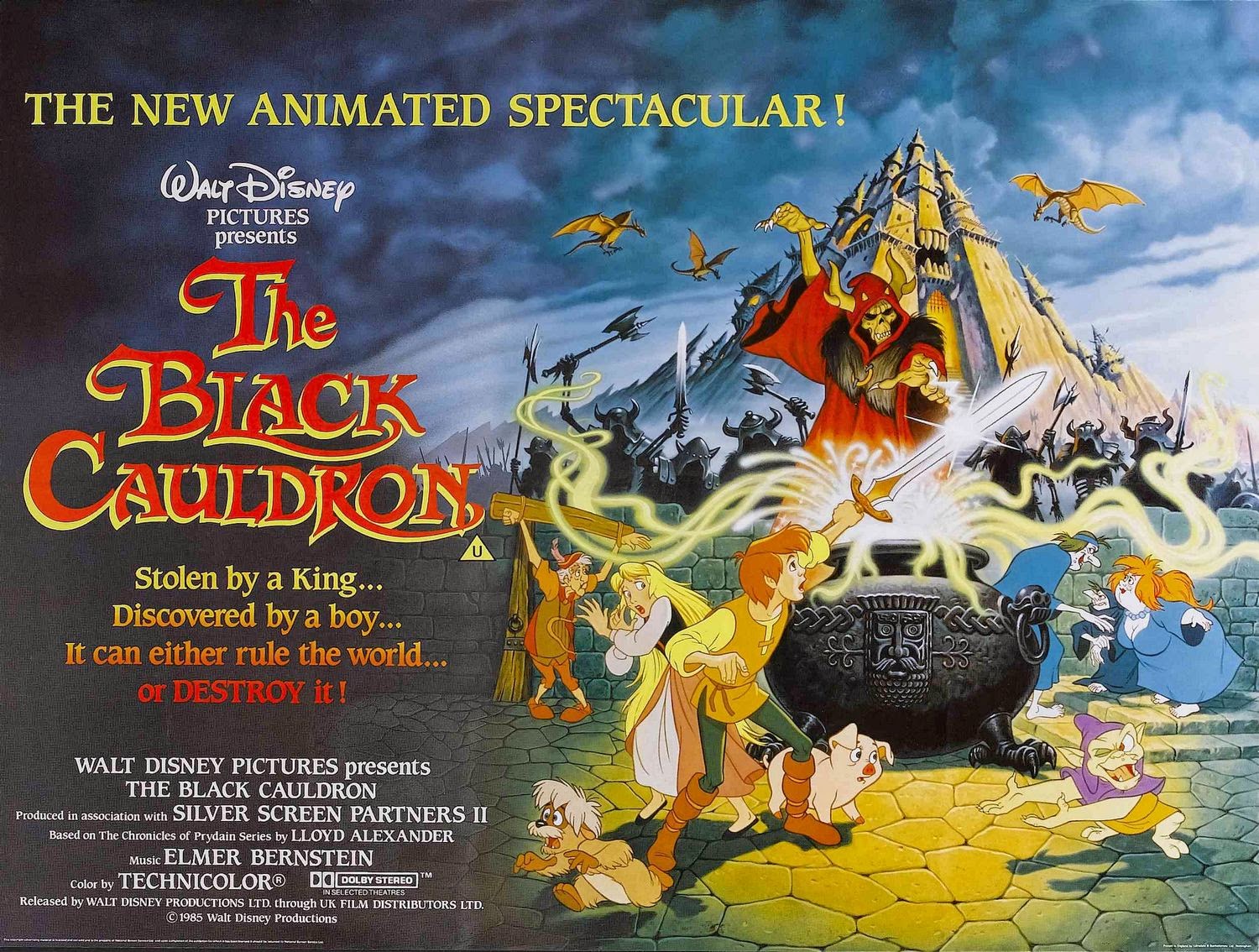 The Black Cauldron ~ Disney's The Black Cauldron from 1985 signaled a jump from the Don Bluth era at the company to the more accessible and successful Little Mermaid and beyond era. For a while there, they didn't know what to do with the animation department, so they did this, and it almost killed animation at Disney.

The Black Cauldron is based on the "Chronicles of Prydain" by Lloyd Alexander, loosely based, if you will, specifically on the first two books but pulling in details from the entire series. There's this fantasy weapon of mass destruction called the Black Cauldron that the big bad, the Horned King, wants. With it he can raise an army of the undead to conquer the world. And there's a pig, an oracular pig, who can find it for him. Guarding the pig is Taran, a little bit like Wart from Sword in the Stone, he's a kid and wannabe hero. King seeks pig, hilarity ensues, quests abound, companions gathered, eventually good guys win - you know the drill.

All things considered, this is not a good film. When I saw it back in the day when it was in theaters, I remember the hubbub about it being too scary and not for kids, and the outrage about how dare Disney put out such a movie. Granted, they were trying for something a bit darker, a bit edgier, but man oh man, this was over the top. By today's standards the Horned King might be too scary. He is perhaps the most frightening Disney villain ever. We are talking definitely a baddie of the effed up "The Walking Dead" zombie monster type. Yeah, I can just imagine this gave some kids nightmares. 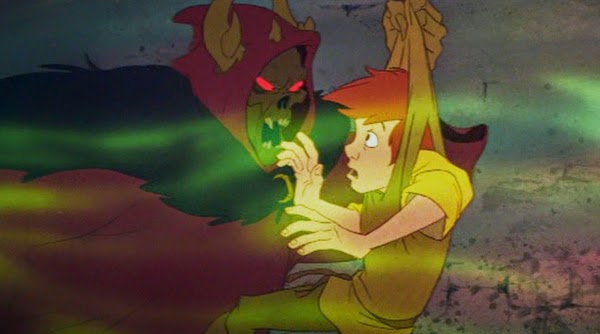 There's some blood, some violence, and no end to disturbing images. It's more adult than usual (there are even boob jokes), and it's just not a pretty animated film. Even comic relief characters like Creeper, the villain's jester-like underling is a little scary. The animation is a cross between Don Bluth and Ralph Bakshi after a night of drunken excess. Very blurry, moody, and it seems like it's always nighttime. I think there was more daylight in Christopher Nolan's Batman trilogy. 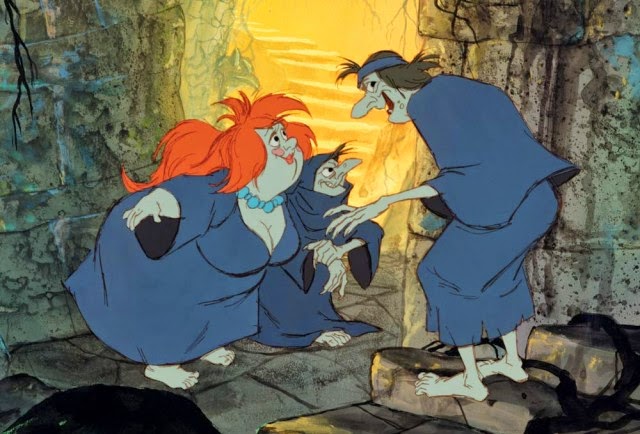 The best part for is one of the friends Taran makes out in the world, a sort of a weird cross between Lady (from Lady and the Tramp) and Stitch (from Lilo and Stitch) called Gurgi. His mumblings about 'munches and crunches' are addictive. You'll be doing it for days afterward. The rest of the movie is not so great however. Just when you think there are enough secondary characters in the flick, they add more. And just when you think the Horned King has gone far enough packing kids' pants with fudge, it gets scarier.

The voice cast is impressive and satisfactory. Notables include John Huston as narrator, Nigel Hawthorne, John Byner, a post-Caligula John Hurt as the Horned King himself, and if you listen close, you'll hear Witchipoo (from "H.R. Pufnstuf"), Billie Hayes, as one of the witches. She was fun.

I watched this with The Bride in anticipation of podcasting about it. I gotta say when you start riffing on a flick MST3k style just a few minutes in, it's not a good sign. The Black Cauldron is an interesting if dated time capsule of what Disney did wrong, before they did it right, worth seeing at least once. And if you want hear more of my thoughts, and The Bride's, please check out the special Black Cauldron episode of The Make Mine Magic Podcast.