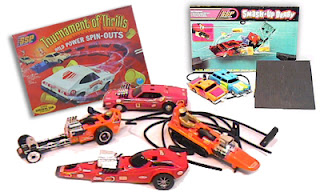 When I was a kid, specifically when I was in second grade, there was one toy that all the boys had, and I mean all the boys. I'm specifying because sometimes the class conflicts squooshed their way through the mud to the surface and there were toys that some kids had, and other kids just wished they had. This was different. It was an equalizer. I'm talking about Kenner's SSP Racers.

SSP stood for Super Sonic Power, at least that's what my addled forty-six year-old mind tells me. I'm sure Google could help, but what's the fun in that, right? These were sleek plastic cars (and sometimes motorcycles) anywhere from six to ten inches long that had only one wheel. They might appear to have more than one, but the others were faux. That one wheel was primary in a basic system of gears that could be wound up and spun at high speed by pulling a toothed plastic strip through them. By pulling the 'T-stick' and placing the car on the ground, floor, whatever semi-flat surface - they would take off like, well, like racers. 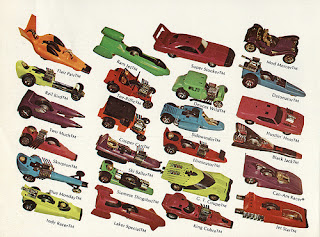 Kenner must have released dozens of models over the course of a few years and like I said, everybody had 'em, would bring 'em to school and race 'em at recess. You could set up ramps, make 'em do tricks - and even have your own demolition derbys - and this was before Kenner got the hint and made their own special SSP Demolition Derby, but more on that later.

What I remember most is how important the model you had was, whether you picked it out yourself, or your parents did, or it was a gift - you could be identified by your model. It might sound odd, but almost forty years later I can still remember who in second grade class had which SSP Racers. I had a blue Indy Racer, which I wanted, I loved the Indianapolis 500 when I was a kid, and then I also had two Siamese Slingshots, one green and black, and one chromatic copper. That was one of the later waves of SSP Racers, chrome colors.

Of the kids in my second grade class, John P. had the Black Jack (did it only come in black?), John F. had the golden Rail Bird, Mark L. had the Two Much, John M. the Jet Star, Bobby T. the Super Stocker… well, you get the idea. We used to race them across the asphalt and up and down a steep ramp used by the food service. Great fun. 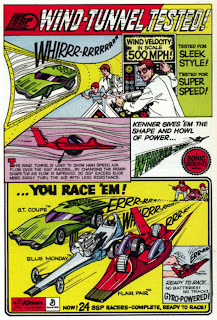 Later Kenner released the SSP Demolition Derby, which came with two different sets, a pick-up truck and a Volkswagen bug, and in the other one, the one I didn't have, a station wagon and I think a sedan. Unlike the futuristic modeling of the regular SSP cars, these actually looked like standard cars, and beat-all-to-hell ones at that. The gimmick was that when the front bumper was impacted, the doors, hoods and trunks would fly off. Cool, right?

But the best part was the set came with two ramps so the cars to collide in mid-air. Those ramps got lots of use, and not just with the Demolition Derby cars. We all used them with the regular SSP Racers as well, and a year or two later when the Evel Knievel rage took over, everyone used those ramps for the Stunt Cycle. No offense to Ideal, but your ramps sucked, Kenner's were the fo' shizzle.

Forty years later, you can find SSP Racers sometimes in stores, usually in generic brands. You see a lot more of them on eBay or on YouTube. Here's a site where people share their memories: click here. One thing's for sure, they won't be forgotten.