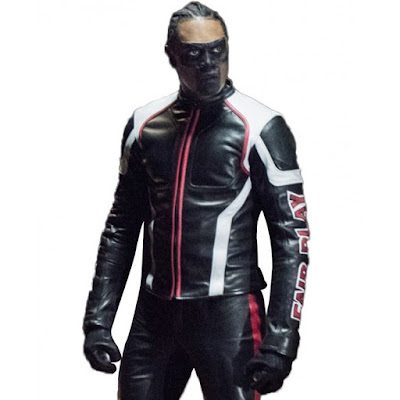 With Adrian Chase exposed as Prometheus and on the run, with the whole city, maybe the whole country (I guess the Flash is too busy mangling timelines to help), on the look out for him, how can he stay hidden?  Still he manages to pull the authorities' chains as in the opening sequence in the arcade with Wild Dog and Mr. Terrific, nice.

My question lies in that vein.  Is Green Arrow still a wanted man?  Would Chase's revelation really even affect that?  And furthermore, if Green Arrow is still wanted (as might be assumed by Oliver's itchy man in black ninja outfit), wouldn't it follow that Team Arrow are also wanted as accessories, if not simply for questioning?  They seem to get free rein in the opening, and it's not like they're all that hard to miss. 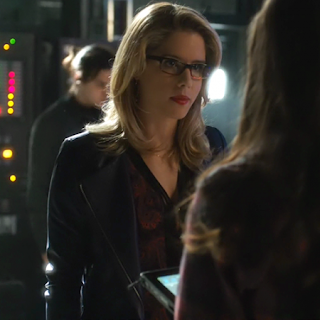 Things get really bad when Felicity demonstrates just how stupid she can really be.  Why she trusts Helix is beyond me.  She was a hacker, she should know how they operate, especially after she knows they hacked her and Team Arrow already.  Here's the kicker - in exchange for their help in finding Prometheus, Helix wants Felicity to hack ARGUS for them.

Alena (Kojo Sledgehammer) and Helix are far more sinister than we originally thought.  As a matter of fact I think this episode may actually be setting up the big bad for season six of "Arrow." Alena tells Felicity of Cayden James, who formed Helix, and is the world's most skilled hacker.  Felicity has never heard of him, and Alena's answer is that he's just that good, he's a ghost, and he hasn't been seen since ARGUS picked him up. 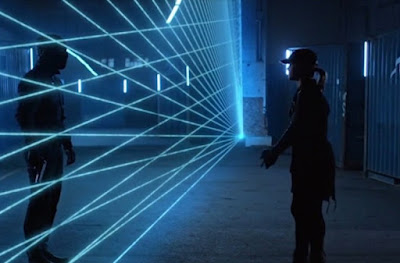 Most skilled?  In a world with Felicity, Cisco, the Calculator, Brie Larvan, the Thinker from the next season of "The Flash," and all these Helix misfits?  Hard to believe, and harder to believe that both the next seasons of "Flash" and "Arrow" would involve cerebral big bads.  Perhaps Helix will emerge as something more like its comics counterpart rather than Checkmate as I first suspected? 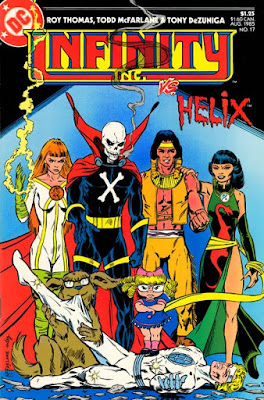 In the comics, Helix is something far too way out and comic booky for a show like "Arrow."  These antagonists of Infinity Inc., the sons and daughters of the Justice Society, were a super-villain group whose genetically engineered members included Mister Bones, a living skeleton with a death touch; Baby Boom, an adult in a five year old girl's body who blows things up; and Carcharo, and giant man-Shark.  Hmmm, we've already had King Shark, so maybe they aren't all that weird...

The thrust of the episode is that Felicity is working for both Team Arrow and Helix even when their objectives clash.  Helix wants their founder Cayden James released from ARGUS, and he coincidentally has tech that could find Prometheus. Oliver of course takes Felicity to task for doing what he always does.  Man, is that kettle black.

There's also a forced subplot of Quentin trying to get Rene and his daughter back together.  There are great performances here by both Rick Gonzalez and Paul Blackthorne, but in the end, another forced subplot to give the character something to do. There is a reunion, and it's great to see Rene smile, but the resolution seems fuzzy, and if it works out I fear we'll lose Wild Dog, one of the best parts of this show from "Arrow." 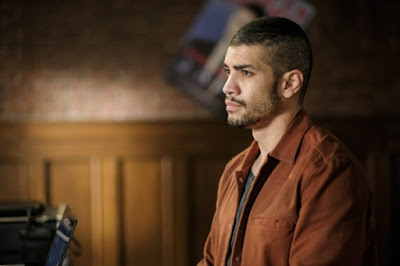 As to the identity of Cayden James, it occurred to me that it might be Felicity's old college boyfriend, after all the inspiration for Helix was Felicity herself.  Another possibility might be, and this is a long shot, Roy Harper.  Think about the name Cayden James, it sounds an awful lot like the actor's name, Colton Haynes, doesn't it?  Either way, I don't think we'll find out for a while.

In the end, Cayden James and Helix are in the wind, and have kicked Felicity to the curb.  I suppose we may see them next season as I guessed earlier.  They did leave her some idea of where Chase may be.  I'm still wondering however, with all the on and off this episode, does Felicity need her glasses or not? 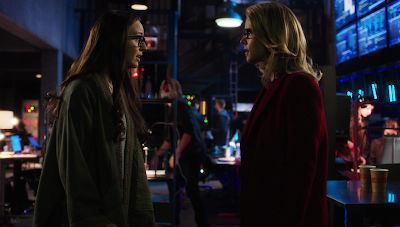 We close with a hell of a cliffhanger.  John and Lyla are in dire straits as are Oliver and Felicity.  It seems to me that a little bit of listening instead yapping might cure both couples' ills.  Felicity and Oliver don't have to worry about it though, cuz Prometheus blows up the Arrowcave, with them in it. 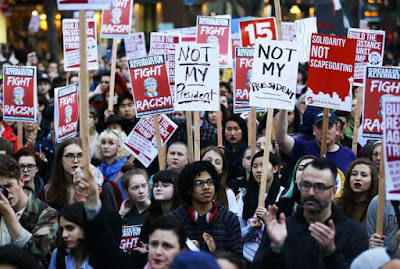 From my dear friend Robin Renee's blog, please join the blog march if you feel the same, and contact her at the email at the bottom of the post.

This is what's happening here and all over the web for the month of May. We are coming together to claim and reclaim the value of our ideas, truths, and inspirations. We are a diverse group including activists, artists, musicians, scientists, authors, spiritualists, atheists, health advocates, and general engaged citizens. Here are just a few of the Blog March participants: Rorie Kelly, Kevin Patterson, Diana Adams, Tom Limoncelli, and Pamela Means. I hope you'll check in, read along, comment, and share. As of this writing, there are still a few spots to fill along the way, so if you'd like to join in, get in touch ASAP!

Here is the original outreach: 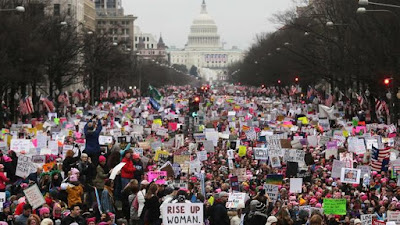 Join the Blog March – Raising Voices for Freedom of Expression, Knowledge, and Information

There is so much to be angry and afraid about in the current political climate. Many people I know have been locked in a kind of emotional and political paralysis – Friends have been asking each other, “What can I do when there are so many points to fight and so much ground to defend? Where can I even start?” Pick a cause, start where you are with what you know, and give it whatever energy you’ve got has been the prevailing wisdom. The idea for Blog March came in a flash and I feel compelled to see it through. 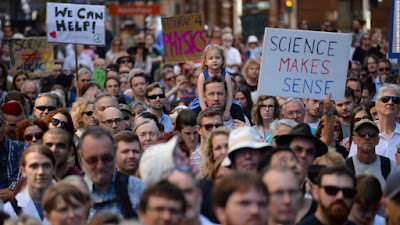 With those ideals in mind, will you participate in Blog March with me? All you need to do is to sign up for one day during the month of May to write a blog post. Write something honest. Write something that feels risky. Write something that needs to be said as a way of pushing back against a political trend that seeks to disregard, distort, and devalue so many. At the end of your blog post, you’ll share the link to the next day’s stop on the way, along with any info on how to support your favorite organizations or activists who work for freedom of expression, knowledge, and information.

Here are just a few ideas:

Write about the impact of protest and resistance - personal, cultural, political.

Discuss how you arrived at the political issue you are most compelled to address.

Talk about an important development in a scientific field that shouldn’t be missed.

Give us a roundup of writers, musicians, and/or artists you think should be seen and heard.

Write what you most need to express right now.

I know that 31 blog posts alone won’t change the world, but speaking up and speaking out is movement in the right direction.

Get in touch at BlogMarch2017@gmail.com. I am looking forward to your ideas! 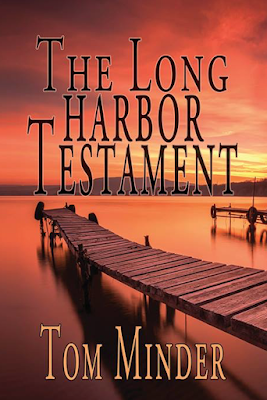 The Long Harbor Testament by Tom Minder ~ I like the easy way out. It is hard to write a fair review for a friend's book. On the one hand, you have loyalty to your friend and a desire for him to be successful in his endeavor, especially when you're in the same field. On the other hand, you want to be honest about the work and not mislead your readers. This decision is always easy when the book in question is actually good, and not just good, pretty darn good, especially for a first novel.

The Long Harbor Testament was a delight to read, not just a compelling read, but a fun read. I breezed through quickly and recommend it just as quickly. Suspenseful, thrilling, clever, and fun, this is a winner full of crime, religion, and junk food. Tom has given me an easy way out, by writing a terrific book, and I hope you find that out for yourself.

The Long Harbor Testament can be purchased at Amazon, at Barnes & Noble, or direct from Black Rose Writing. Don't forget to check out Tom's website, his Facebook page, his Twitter, and you can also read an interview Dawn Byrne of the South Jersey Writers' Group conducted with Tom here, all good stuff. 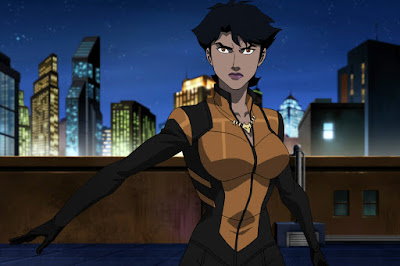 Last year, before the live action debut of Vixen on "Arrow," I reviewed season one of her animated digital series on CW Seed. You can check it out here.  This year the character has not only a second animated season, but her grandmother, the Golden Age Vixen, who in Arrowverse continuity was a member of the Justice Society of America, is now part of the "DC's Legends of Tomorrow" crew. 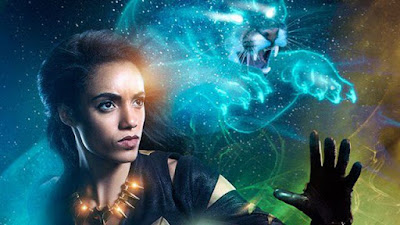 Her role in "Legends" was tricky as showrunners originally wanted Megalyn Echikunwoke to reprise her role but when she was unavailable, the time travel series turned to time travel for a solution and recruited Maisie Richardson-Sellers as Vixen's grandmother who also used the Tantu Totem to gain animal powers and fight crime and injustice.  When her lover, Hourman, was slain by the time traveling Reverse-Flash during World War II, she joined the Legends to hunt the evil speedster down.  That quest continues through this, the show's second season. 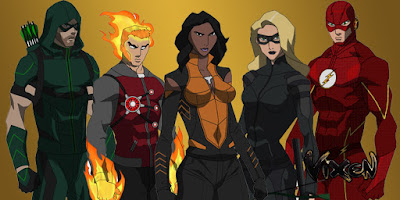 In the second season of the animated "Vixen" on CW Seed however, Echikunwoke returns to reprise her original voice role. Vixen's journey to uncover her heritage and powers continues.  We once again see guest-stars the Flash and Cisco Ramon, as well as Firestorm when Vixen is called upon to help stop the Weather Wizard from destroying Monument Point.  As you can see from the linkage, this series is solidly entrenched in the Arrowverse continuity. 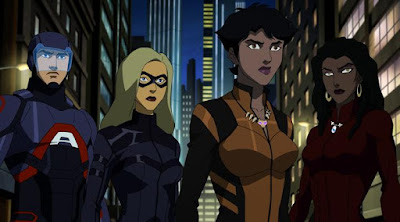 Vixen's quest leads her to the discovery of four other totems similar to her own, but granting powers of the four elemental forces.  An old enemy of her family with the fire totem seeks revenge in this tale of consequence and reunion, that also guest-stars DCTV second stringers like Black Canary and the Atom.

Bottom line, this is a fun adventure, and there are sure to be more as there are still two other totems out there.  CW Seed is a cool app too, now with the much missed "Constantine," and soon to host its possible animated continuation.  Great stuff.