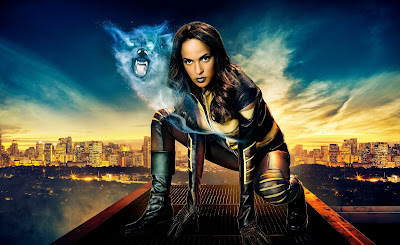 Since watching the short animated series on CW Seed, I have been wondering how they would show Vixen's powers in live-action. When Oliver calls on her to help locate Damien Darhk, I guess we'll find out.

First things first, we get diversions. Felicity is in therapy trying to relearn to walk now that the yet-to-be Mr. Terrific magic technology has been implanted in her spine. And then there's some of the usual nonsense from Flashback Island, and then just when we thought we were never going to get to the point, you know, live-action Vixen, they throw the real curve. 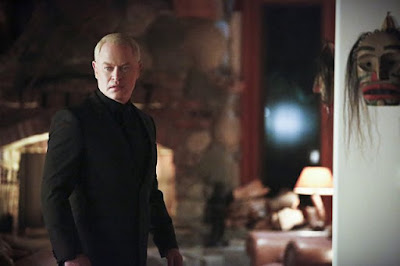 Darhk comes out of the shadows and confronts Oliver and Felicity, and basically tells Oliver to drop out of the mayoral race or his son William gets it. And as usual, Felicity is the last to know, only just engaged and in need of marriage counseling. When Samantha, William's mom shows up, it gets obviously worse. I find it ironic and hilarious that Oliver keeps saying he's changed when he obviously hasn't. Actions not words, Ollie, actions not words. 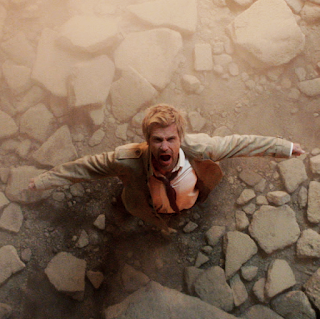 Seeking help for this dilemma, Diggle suggests John Constantine, but Oliver counters that he's in Hell - literally in Hell. Perhaps that answers the questions I had about going to him for help with Thea a few episodes back, but will we see him again? Perhaps a resolution to this Hell thing? Or maybe an explanation to how Oliver even knows this?

Then Vixen's name comes up. No words are spoken but the looks on the faces of Team Arrow, especially after the Constantine in Hell comment, convey the same thought - "what the heck, something else you're keeping from us???" 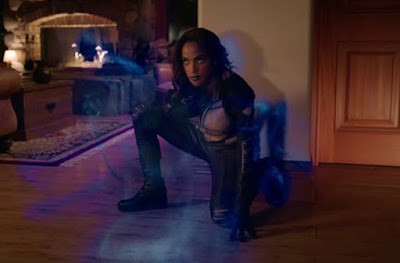 Cut to Detroit, bad guys on the run, with a growling unseen force in pursuit. Soon Vixen, portrayed by Megalyn Ann Echikunwoke, the same actress who voiced her in the CW Seed animated series, makes her appearance. She's perfect, and the CGI effect to show her powers is amazing. I couldn't ask for a better comics to TV, or animated to live-action transition.

Vixen mixed in with Team Arrow fairly well, although it seemed like she and Laurel knew each other. Have they met? I loved Oliver's comment about his 'animated encounter' with Vixen last year. To find William, Vixen uses one of the boy's favorite toys, a Flash action figure. Mari jokes to Oliver about not telling Barry. Is everyone so fast and loose with secret identities? Couldn't Samantha just put two and two together and realize the cop she met, Barry, is the Flash? And what was with Mari's disappearing and reappearing lipstick?

Speaking of secret identities, how is it that after several close encounters with both Oliver Queen and the Green Arrow (tricks aside), and all that hocus pocus at his disposal, Darhk isn't sure Oliver is Arrow? It's obvious. 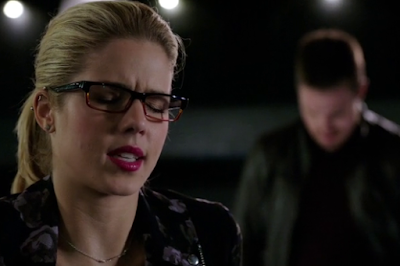 I did like the first fight between Darhk and Vixen and Green Arrow. Speedy had some rather cool stunts this time. The end bit with William seemed both sad and a little too convenient. Felicity on the other hand has had enough of Oliver's crap. There's a momentary miracle of her legs finally kicking in, and she uses them to walk away. Good on her.