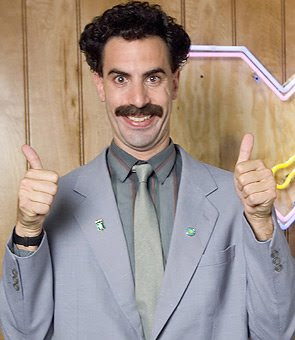 I owe Steve Friedman a huge apology. He's Mr. Movie, heard locally on talk radio in the Philadelphia area for nearly twenty-five years (currently at WPHT 1210 AM Saturday nights), is one of the foremost experts on film and cinema ever - he knows almost as much as I do. ;-)

We frequently disagree, but as has been said a million times, Opinions are like a-holes, everyone has one. This past Saturday night Steve went on about how Stranger Than Fiction wasn't a great flick and how he didn't like it. I thought it was brilliant, nothing new, as I said, we frequently disagree. He then followed that opinion up with his thoughts on Borat, which he said he walked out on. That's a pretty forceful statement coming from any film critic, something is so awful that they had to walk out of it.

Upon hearing that I immediately relayed the info to my bride and said, "We MUST see Borat, if Steve hated it that much, it's probably good!" Additionally, there was also all that hype about it being the funniest movie ever made, and of course, it was also number one at the box office (not that that is a big deal, hell, Wedding Crashers was number one at one point). So we went to see Borat.

I sincerely apologize, Steve. This is one where we agree completely. I wanted out of the theatre almost at once. I did not, however, walk out, though I wish I did.

Borat is a racist, sexist, homophobic, anti-Semitic piece of shit.

DO NOT SEE THIS FILM.

Posted by Unknown at Tuesday, November 14, 2006 No comments: