Just wanted to let you folks know the newest edition of our comic review website Comic Widows is now up.

Comic Widows presents articles, opinions and reviews of comics in all forms of the media: mainstream and independent print, film, television, manga and anime, gaming and on the web.

Our April issue features over one hundred comic reviews including a new edition of Rick Silva's Panel Discussion, a review of Marvel Comics' Civil War, a retrospective on Jack's Joke Shop, the 2006 NerdCon, and the notorious much much more.

You can check it out at: www.comicwidows.com

Please visit our message forum at Comics Uncovered or Yahoo! Groups and join in the discussion.

Also if anyone is interested in submitting articles, reviews or press releases, we are always taking submissions. Our next deadline is April 30th. Send them to:
comics@comicwidows.com 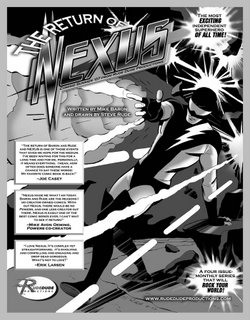 Check out the Steve Rude interview at Pink Raygun. An artist I love talking about a book that I love at a website that I love... Pink Raygun
Posted by Unknown at Saturday, March 31, 2007 No comments: 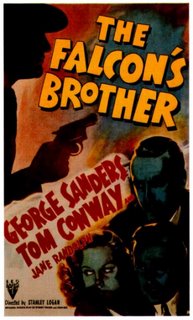 The Falcon's Brother - These days heroic legacies are all the rage in comic books, mostly because most superheroes began in the 1940s and the need is felt to pass the torch to new generations. Hey, after all, nobody wants to be rescued by an eighty year old, right? Especially in spandex. The Falcon's Brother represents a whole new twist on the legacy formula.

The Falcon - also known as Gay Stanhope Falcon, AKA Gay Lawrence, AKA Guy Lawrence - was a freelance adventurer who owed quite a bit to the hard-boiled detectives of his time and quite possibly a bit more to The Saint, the hero he was meant to replace in RKO's stable as a film adventure series. Created by Michael Arlen in a single short story from Town & Country Magazine in 1940, The Falcon has evolved and transformed throughout the years, changing jobs and identities and backstories like the proverbial chameleon changes colors. Things that were always present however were his suave attitude and penchant for getting into trouble.

The Falcon's Brother was the fourth in the Falcon series and the fourth for actor George Sanders in the role. Sanders had in fact also played The Saint. Part of his contract to appear in this fourth Falcon flick was that it be his last. Sanders insisted he be killed off and the writers gleefully obliged as rumor has it he wasn't the most amicable man to work with.

In a bit of inspired casting, Sanders' real life brother and actor Tom Conway came on board as the film's title character. The film begins with Gay Lawrence investigating his brother's supposed murder, getting hurt with brother Tom taking over the mystery from there. The original Falcon's death at the end opens the way for Tom Lawrence's acceptance of the name and legacy. Tom Conway would portray this new Falcon for nine more films, some of the better ones, I might add.

The Falcon's Brother, like most films in the series, is a wonderful mix of smart banter, film noir suspense, and just plain fun. These flicks are a kick to watch, even now. This one's better than most because it features both Falcons. The best line - "One Falcon around here is enough!"
Posted by Unknown at Saturday, March 24, 2007 No comments:

Apparently Once Was Enough

On Her Majesty's Secret Service - This one is almost as hated as Never Say Never Again and the parody version of Casino Royale, but I say it's actually one of the better James Bond films. This was George Lazenby's only shot at playing 007 before he was talked out of it before the film was even released by friends who supposed that Bond was a dead subject in the midst of the Woodstock generation. Of course time has told a different tale and I guess George has spent quite a bit of time kicking himself. That said I think Lazenby makes a fantastic Bond, definitely better than Dalton and Moore in my book. He makes all the right smart remarks without going over the top like Roger, and he's a hell of a fighter as well, matching Connery for action savvy. The flick is extraordinarily well-acted, with both Diana Rigg and Telly Savalas making us effortlessly forget they are both better known as Emma Peel and Kojak. The music is killer and also look for clips of Bond themes from earlier films, a running injoke in this one, referencing what has gone before. I could have done without the ski and snow chases, probably boring because they could have been done so much better. Also look for Joanna Lumley in her first screen role, years before "Ab Fab." This is one of the better Bond flicks, folks working on the new ones should check OHMSS for ideas.
Posted by Unknown at Monday, March 19, 2007 No comments:

If you'd like to comment on or discuss these books or these reviews, please join us at the Avengers Forever Forum.
Posted by Unknown at Saturday, March 17, 2007 No comments:

We've lost another of the greats. Annie Get Your Gun, The Greatest Show on Earth and The Perils of Pauline were among her best.

Sleeping isn't easy sometimes and late night TV is usually more irritating than anything else. So when there's nothing good on Coast to Coast AM I will tend to pick something from the On Demand menu to put me to sleep. Here are a few examples that I've actually managed to see in their entirety after many viewings. Before I nodded off, that is.

Woman Wanted - This was a terrific snoozer and I watched it more than a few times before I even got past the first couple minutes. Holly Hunter is the woman hired as a housekeeper by father Michael Moriarty and son Kiefer Sutherland. These two men are the textbook definition of dysfunctional, thus made by the death of their wife/mother. Holly, in one of her less annoying performances (she can be wonderful, but more often she makes a chainsaw sound soothing), gets the two talking and relating to one another - before she starts sleeping with both of them, that is. There are good parts, but mostly slow and agonizing. Good to watch if you ever want to get the tough guy "24" image of Sutherland out your head. His shortpants wardrobe made me laugh out loud more than once.

House of Wax - No, not the 3-D classic from 1953 starring Vincent Price and Carolyn Jones, but the equally low budget schlocker from 2005 with "24" star Elisha Cuthbert and the infamous Paris Hilton. While I did drift off once or twice to this one, it's really, believe it or not, quite good. This House follows a familiar formula of many 1970s drive-in horror flicks and does it well. Elements that stand out are the stereotype empty town, the creepy guy who cleans up roadkill and the actually big budget house made of actual wax. The house pays off big time in the end, but it must have been a bitch to film. Paris Hilton really shines in this movie because she is essentially playing herself, not a heiress mind you, but otherwise herself, and because of it she comes off very reall and very believable. Not as much a waste of time as I originally thought, and a few good scares as well. Check it out.
Posted by Unknown at Wednesday, March 14, 2007 No comments: 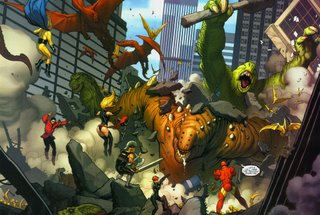 "Mighty... Familar" - My review of Mighty Avengers #1 is now online at Avengers Forever.

You can check it out here.

To discuss this review or talk about anything Avengers-related, please join the AF Forum.

Avengers Assemble!
Posted by Unknown at Saturday, March 10, 2007 No comments:

The Best Show on Television You’re Not Watching

"Day Break" - Canceled by ABC after too few episodes this has been completed and is available to watch on ABC.com. The exact URL: http://abc.go.com/primetime/daybreak/index.html. Don’t miss it! Day Break is a wonderful suspense-mystery-thriller that breaks down like a cross between Groundhog Day and "24." Detective Brett Hopper, played by Taye Diggs, has been framed for a murder he didn’t commit. If that’s not exciting enough, he’s living that same day over and over and over again just like our friend Bill Murray, only it’s not funny – it’s deadly serious. There are excellent performances by Adam Baldwin, Moon Bloodgood and Mitch Pileggi as well. Other than maybe "Heroes" and that other canceled show "Kidnapped," "Day Break" is the best show to come out of last season. A shame it was canceled, but thanks, ABC, for letting us see it through.
Posted by Unknown at Monday, March 05, 2007 No comments:

God Said, "Ha!" - I have always been a fan of Julia Sweeney's work on the big and small screens and her writing. Well, almost everything. I can't say I've ever been a fan of her "It's Pat," which unfortunately what she is primarily known for. There is thankfully very little of "Pat" in this flick. God Said, "Hi!" is Julia's fairly successful one-woman stage show set on film. She talks about her experiences with a brother dying from lymphoma and her own battle with cancer. She manages to inject humor into the situations smoothly and effortlessly. There are also difficult parts where you know she's having trouble continuing where you know know she just wants to run off stage crying. Sweeney holds it together though, and puts on a wonderfully bittersweet and amusing show.

FM - This used to be one of my favorite movies both before and after I worked in radio. Unfortunately with the radio industry so changed in the last decade or so, the entire concept of this flick is outdated, like a piece of ancient history. Many hilarious performances, Martin Mull especially, displays why he was so popular in the 1970s. Highlights include bits of a Linda Ronstadt concert and a Tom Petty cameo. Great music of the era.

The Conversation - A terrific thriller that I can watch again and again. I never tire of Gene Hackman in this one. He is at his most intense pre-Luthor brilliance. His character reputedly even reappears in 1998's Enemy of the State. Great twist ending and fun early performances by Harrison Ford, Cindy Williams and Teri Garr.
Posted by Unknown at Sunday, March 04, 2007 No comments: