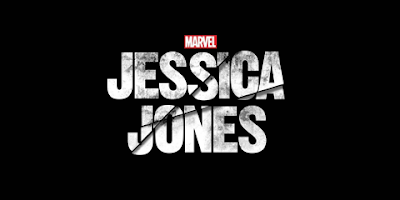 Producer/writer Hilly Hicks Jr., late of "The Big C" and a show that didn't get enough of a chance, "Kidnapped," wrote this one, with David Petrarca directing. Petrarca's resume includes "Boardwalk Empire," and "Game of Thrones," among others. That Marvel can command such talent amazes me. Comics have truly grown up.

As we open Jessica is pondering the eyes of the Purple Man. They're everywhere. Anyone could be in his thrall, watching her, taking pictures of her. It's maddening, and a lesser person would break. Jessica, she goes to work, and finds a new case on her doorstep. 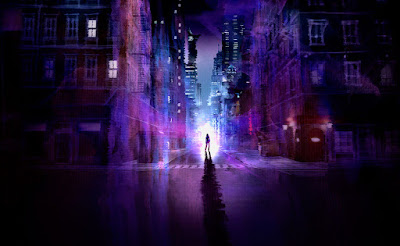 Standard stuff - mad wife needs in flagrante photos of her philandering husband for the divorce, but it's the reference that's fishy. Paranoia's gonna getcha to paraphrase the Kinks. Once bitten, twice shy, to quote Ian Hunter. Jessica is remembering the Hope case from "AKA Ladies Night," which Kilgrave sent to her door. 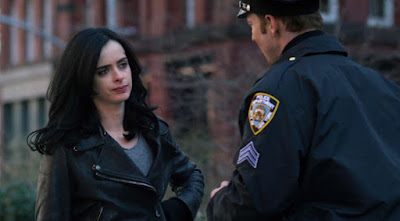 Meanwhile Patsy, I mean Trish calls. The cop who tried to kill her last episode is back, and it's Jessica to the rescue. Trish isn't in danger; the cop is out of Kilgrave's power and now worried he had killed her. Jessica talks him down, her cover is blown, and now this cop knows more than she wants him to, but she calms him down. 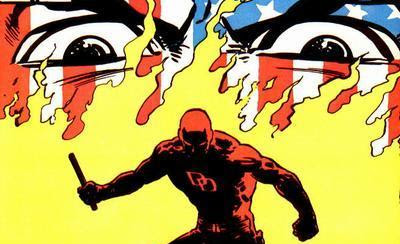 While this could be a lesson in the scope of the Purple Man's powers and what happens to the people he throws away, there's a little more to this. We will see this guy again, I think. The cop was identified as Will Simpson, former special forces, and that matches up to something in the comics… Nuke. That Will Simpson was subjected to the same super soldier programs that created Captain America and Wolverine, became a cyborg, tattooed an American flag on his face, and fought Daredevil while rampaging through Hell's Kitchen.

Back on the case, Jessica, thinking Kilgrave is behind it, follows the wife not the husband. She sees her practicing her gun skills, and when Jessica is sure she's not mind controlled finally follows the husband. Like Admiral Ackbar always says, it's a trap, and not by the Purple Man, by the wife. She lost her mother in the Battle of New York, and blames superheroes. Learning that Jessica is 'special' and 'gifted,' she went after her. Big mistake. 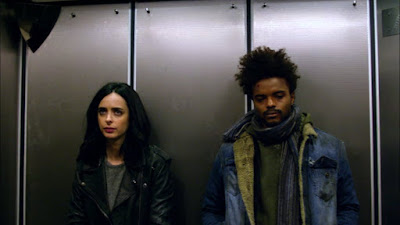 Also in this episode we had the intriguing concept of a support group for Kilgrave's victims, a slowly growing at gunpoint friendship/relationship between Trish and Will, and the revelation of who's been following and taking pictures of Jessica. The Trish and Will thing is a bit creepy, and by the middle of this one I knew Malcolm was the spy.

Despite the twists and turns in this episode, and the lack of Kilgrave's physical presence, I dug this episode quite a bit, and I was relieved the Purple Man was not the major villain of the piece. The only letdown was the Hogarth divorce, which was as interesting as watching Diggle just stand around and do nothing on "Arrow."