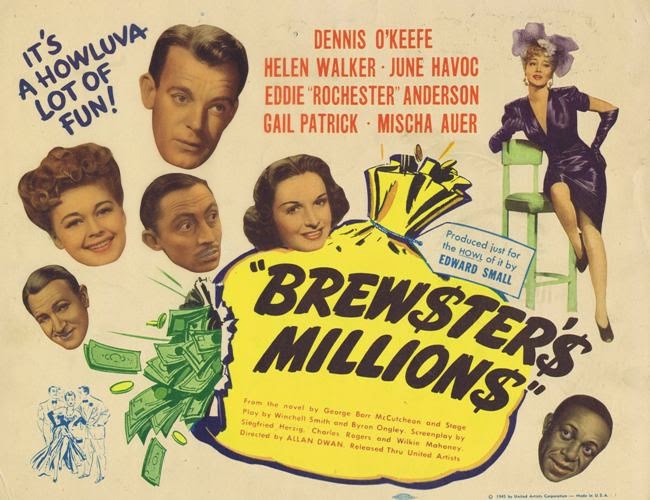 The 1985 version of Brewster's Millions with Richard Pryor and John Candy is one of my favorite guilty pleasure films. It's silly, it's funny, it's predictable, but the talent involved elevates the movie to a new level. I'll watch it whenever it's on, and laugh every time.

Brewster's Millions is an old idea however. Previous to Richard Pryor's updating, there was a 1945 film, one of a total of ten movie versions, radio dramas, stage plays on and off Broadway, a musical, and numerous adaptations for TV either veiled or obvious. It's been done in cartoons, to music, and even in Bollywood. The story of a man forced to spend money to learn the value of money is resilient. Old ideas get around. 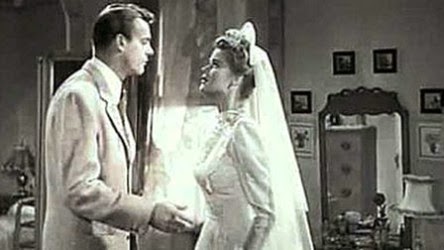 As I recently watched it again, today I'll be talking about the 1945 film. Like all versions of the story, it's based on the 1902 novel by Richard Greaves AKA George Barr McCutcheon, author of the now largely forgotten Graustark book series. There are also elements of the stage play in this. Each version features updates to the times, though originally a stockbroker, here Brewster is a GI returning home from the war.

Here's the gist. Penniless Monty Brewster comes home from the war to find he's inherited eight million dollars, but in order to get it, he must first spend a million dollars in sixty days, with no assets, and not let anyone know why he's doing it. His dead uncle wanted him to hate spending money. Dennis O'Keefe is in the title role, with Helen Walker as his fiancée, both serviceable. Look for Neil Hamilton, Commissioner Gordon from "Batman." Eddie 'Rochester' Anderson plays the family servant (for lack of a better word, butler maybe? later he's a majordomo) and is by far the best part of the movie. The actor, best known from "The Jack Benny Show," gets all the best lines, the best laughs, and steals the movie. Notably, a sign of its times, the film was banned in Memphis because his character was portrayed and treated too well.

There is care, and comedy, in the style of the decade depicted, but no one on screen approaches the charisma level of Eddie Anderson. I think I would have really dug the movie more had he been cast as Brewster. Still, it's a pleasant entertaining film, and I was happy to see it again. See it if you get the chance.