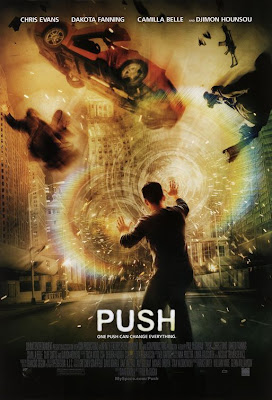 Push ~ Scanners meets X-Men meets The Matrix, only without the originality - that’s how this one strikes me. Telekinetics wage war in Hong Kong over a powerful drug, hilarity ensues, you can guess the rest. I did, after about twenty minutes.

Kudos to director Paul McGuigan. It takes a lot of skill to suppress a talent like Dakota Fanning and make her boring. Even the usually charismatic Chris Evans is deadly dull in what should be a special effects blockbuster. Been here before, with cheaper effects and on a second rate cable network. This is just a Saturday night SciFi Channel movie with a bigger budget.

There are a few interesting special effects and one or two fight scenes that ultilize them, but little else here other than some Hong Kong scenery (and honestly I’m not even sure it’s really Hong Kong). This flick really stinks of being a rejected X-Men script, so much so, I wouldn’t be surprised to find out it was. If it’s true… damn good thing it was rejected.