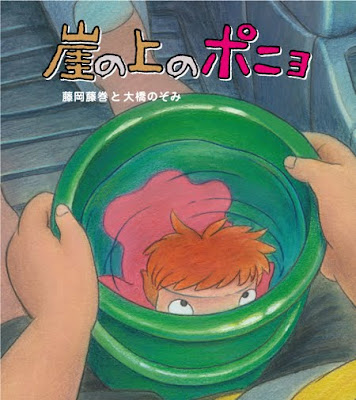 Ponyo ~ The first thing that strikes me about Ponyo (also known as Gake no ue no Ponyo) is how terrific it is now that in America, not only are Hiyao Miyazaki’s films distributed mainstream by Disney, but that Hiyao Miyazaki films are now an event. This is just how it should be. He’s a genius, and it’s about time he’s treated this way.

I think a lot of that may be due to TCM. A year or so back they did an entire week of Miyazaki films that brought his work into the mainstream consciousness. I knew about him but then again I have a comics and anime background. I know this was when my wife’s eyes were opened to his brilliance, a probably many others as well.

Ponyo is a simple yet bizarre tale of a goldfish who falls in love with a little boy and then wants to become human. From there it gets complicated. And the complications are what I love about Miyazaki. He always follows the game plan of the Hero’s Journey, yet he takes the roundabout way, the twisted mountain road, so that he is never predictable – and that’s refreshing. When was the last time you could not guess the ending or even the next scene of a film?

This is an enjoyable flick for both adults and children, and highly recommended. I really enjoyed it. And if you like what you see, check out the rest of Miyazaki’s films. You’ll be glad you did.