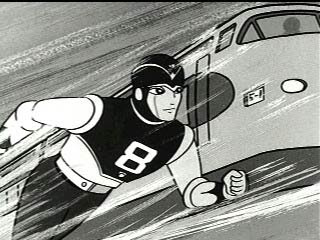 I’m giving away my age with this one. What the hell, I’ll come right out with it, I’ll be 45 next week. Yeah, I’m effing old. Anyway, when I was barely old enough to walk or read I also started watching television, thus beginning a destructive habit that lasts to this day.

There were certain cartoons that I vaguely remember, but recall as being good, but never saw again until decades later. There were “Gigantor,” “Kimba” and “Astro Boy,” both of which I had little memory of but when I saw them again decades later I found my initial reaction was fairly dead on. These were excellent anime that still hold up and are as entertaining to me now as they were then.

There was also another Japanese cartoon among them that I vaguely recalled, but never saw again. This was called “Tobor the Eighth Man,” but my foggy young brain remembered it as “8 Man,” which ironically was the actual Japanese name for the hero and the show. Legend (and fact) has it that the reason we’ve never seen this again in the States is that 8 Man gets his powers from smoking cigarettes. I’m unsure whose idea this was for a children’s TV show, even in 1963, but come on, really? And furthermore, why would a robot smoke? 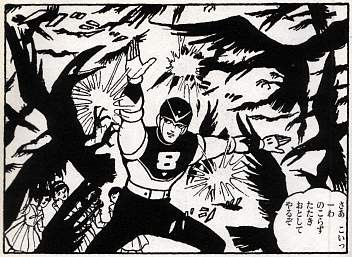 I finally got to see a few episodes on a DVD called Cartoon Crazys: Comic Book Heroes, thank you, NetFlix. Sadly, it does not hold up as well as the others I mentioned. The tale of a police detective murdered by criminals whose mind is put into the body of a robot is intriguing yet done with the simplistic overtones of a standard American cartoon, rather than a Japanese anime.

Frequently 8 Man is referred to as the precursor to Robocop, and an original concept in itself. This is not necessarily true. It should be noted that in 1942 DC Comics published the adventures of Robotman, a robotic crimefighter with a human brain, created by Jerry Siegel of Superman fame. Either way, it’s still fun. Ralph Bakshi worked on these translations and his sly hand can be heard in lines like “Why is this sign in Japanese?” commenting on the kanji characters throughout the cartoon. Like I said, fun.

“Tobor, the Eighth Man” is worth a look, if for nothing other than nostalgic reasons. And remember, kids, don’t smoke!