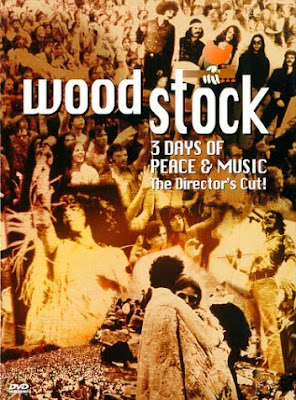 Woodstock ~ I had seen this once years ago, in an edited form, unfortunately, on a late night UHF channel. Hmmm, I guess that kinda indicates just how many years ago that was. But this is the first time I’ve seen the whole thing. Although, seeing how VH1 Classic is showing it in full frame, I guess you could say I’m really only seeing half of the whole film. The director’s use of split screen techniques makes this even more painful.

My first memory of the Woodstock film is a review in my big sister’s college newspaper called the Common Sense. It had the very cool and dated tagline of “You don’t need a weatherman to know which way the wind blows,” and over a decade later I would write for it, but that’s another story. The reviewer said that the guy who made the movie sure liked sunrises and sunsets, man, and that’s pretty much all he said. That stuck with me because I was confused, and because I thought Woodstock was about music.

And it is about the music. Early on, The Who’s music from “Tommy” and especially their version of “Summertime Blues” is electrifying and yet the later bit by Sha-Na-Na is just puzzling. Sly and the Family Stone, Ten Years After and Santana give good music, although I wonder if Sly was upset Roger Daltry was wearing the same outfit as he was. And of course the most inspiring moment was Jimi Hendrix playing the crowd awake with “The Star-Spangled Banner.” 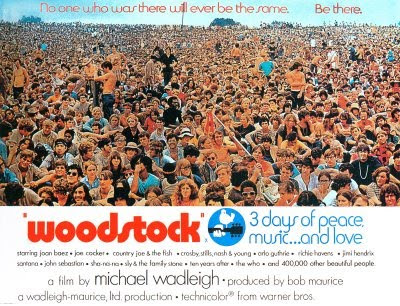 Regarding Joe Cocker’s amazing performance of “With a Little Help from My Friends,” sometimes when someone does a parody of something, you tend to forget the original and only think of the parody. Trust me, after you see the real thing, you will forget John Belushi’s brilliant Joe Cocker imitation forever.

A positive perspective is kept throughout the film, even when things fall apart, which is probably for the best. Much effort is also put forth to illustrate what the experience of being there was about, something not often done with concert films. Woodstock was a logistic nightmare that worked out simply by serendipity – or peace and love, if you prefer. As has been proven more than once, this kind of thing could never happen again. This is a great time capsule to a happier simpler time, and an excellent concert film – and yeah, there are a lot of sunrises and sunsets, man.