There are times in music where genre cross and mix. When Queen brought opera into rock with “Bohemian Rhapsody” would be one such occasion. When the London Symphony Orchestra performed the songs of Queen later in the 1970s was another. Things like Apocalyptica and the Trans-Siberian Orchestra grew from these hybrids. Sometimes there are actual moments like Jam-Master Jay putting “Toys in the Attic” on the turntable or Jimi Hendrix playing “The Star-Spangled Banner” at Woodstock or Tchaikovsky bringing cannons onto a stage. That’s the kind of passion and creativity that thrives within "The Rock Tenor." 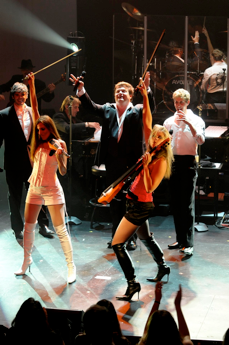 The tagline touts the show, now running at the Wilma Theater until August 23rd, as “All the songs you love, like you’ve never heard them before.” That pretty much describes this intriguing mix of Broadway, classical and rock and roll. And it’s not just mixing genres, we also see and hear songs re-arranged as they’ve never been heard before, regardless of musical type. Know also that this is not your standard Broadway-type stage show, it is more or less a performance or a concert. No plot to follow, just sit back (or stand up, or dance!) and enjoy this melding of musical style.

Lead vocalist Rob Evan is a veteran of the musical stage, appearing in Jekyll & Hyde, Les Miserables, Little Shop of Horrors and Dance of the Vampires. His foremost singing credit is probably singing lead for the aforementioned Trans-Siberian Orchestra. He is flanked by a stage of amazing vocalists and musicians including Betsy Goode and Susan Aquila on strings and the subtle but powerful J.D. Valenteen on guitar. The latter’s charisma shines from the background throughout the show. 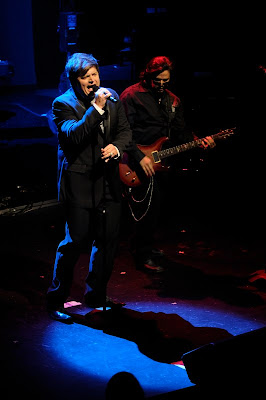 The mixing of Journey with Sondheim, Daughtry with Les Miz, Bocelli with The Police, and Puccini with Led Zep are brilliant. And had the cast stayed with that type of magic, the show would have been perfect. While I found the unique covers of the Beatles’ “Yesterday” and Leonard Cohen’s “Halleujah” equal to the task, I was just as disappointed with the redos of “Life Is a Highway” and especially “Paradise by the Dashboard Light.” By the same token, I thought singer Morgan James’ “Somebody to Love” amazing yet Evan’s Queen tribute a bit over the top. I might put “The Devil Went Down to Philly” in the same category had it not highlighted the mad skillz of Goode and Aquila.

All that said, this is an incredible show that I highly recommend to everyone. The crowd I saw it with was very mixed age-wise, and everyone enjoyed immensely. For young or old, fans of rock or classical, everyone should see “The Rock Tenor.”