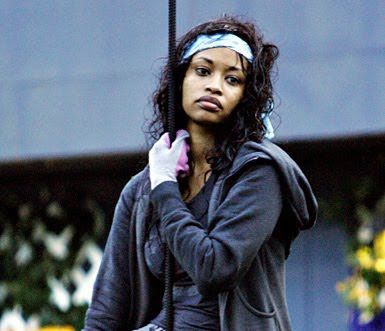 From Small Screen Scoop, here is Chima Simone’s statement regarding being kicked off “Big Brother 11,” spelling and grammar intact...

”Yes, I did in fact quit the show, although there are reports on EW from CBS to the contrary. Big Brother would like everyone to believe I was kicked off for not following the rules, but I went to the producers repeatedly over the past couple of days wanting to leave….wanting out of that house!

“As crazy as that house is, the producers NEVER want the world to think or know that we houseguests DO LEAVE when it becomes futile to stay. I lost faith in the show & my ability to remain committed to this game. All of the remaining housemates know I wanted to leave and that is why any conversation concerning me is cut in the live feed because they don’t want America to hear the truth about my voluntary departure.

“Do you really believe that I would be expelled for tossing my microphone when past houseguests have only been kicked off for violence & threats of violence? You know better, as do I.

“It’s better that I left. I did what was best for me in this game and that was to leave. When I chose to play & play hard the power I did earn was completely usurped by a game piece never used before in this game and my HOH reign was rendered useless. I have no regrets. As cliche’ as it sounds, until the public is a part of a human pressure cooker, then the judgements should cease. 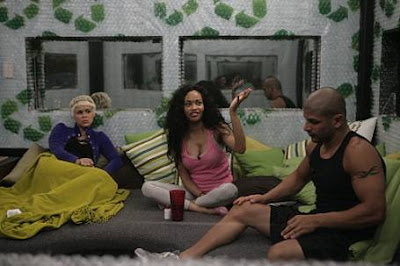 “I find it interesting that my personal attacks on Russell have been highlighted, but his attacks on me pushed under a rug. Selective portrayals? I think so. Russell did terrorize the house, especially the women in the house. Why America constantly finds men attacking women okay, yet vilifies the woman defending herself, will always confound me. But what’s done is done, now BB fans can find a new woman to hate. I didn’t sign up for what I was exposed to & I left gladly. It was the principle of the matter, the $500,000 prize be damned. That’s all for now! Take Care…”

Just an observation, since Chima was, um, let’s just say, she is no longer there, the house is quieter, more sane and all the houseguests seem more relaxed and comfortable. Hmmm, I wonder what could be different now?