The Evils of Evel Knievel 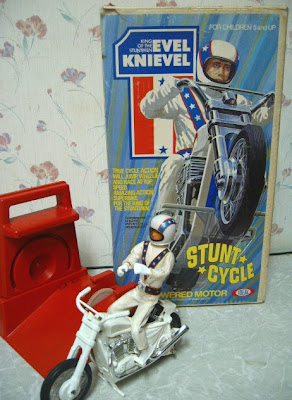 As I turn forty-five today I’m thinking of a birthday exactly thirty-five years earlier, when all I wanted in the whole wide world was the Evel Knievel Stunt Cycle Set. I even remember that tongue-twister name to this day, probably from saying it so much in the weeks before my tenth birthday.

I think it was one of the few times as a kid that I was obsessed with a toy that much. Evel Knievel in the 1970s was a larger than life figure. I remember watching his jumps on ABC’s "Wide World of Sports," and even listening to my AM transistor radio that Sunday afternoon for news of how his Snake River Canyon jump went. He was like a superhero, even dressed like one, but he was real. Maybe that’s where it came from.

The toy itself was pretty simple, a motorcycle, an action figure of Evel himself, and the 'gyro-rev-booster' that made the cycle go. It was magic in a box. The problem was, it was a 'doll.' And my father was dead set against me having 'dolls.' It was a dead stop point. 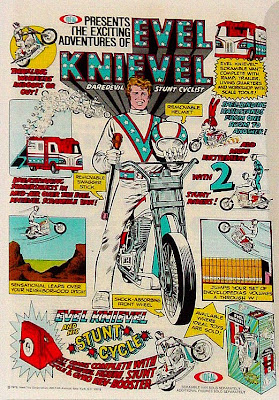 I had no dolls. Hell, I had no action figures, even though that term to my father meant doll, no matter what you called it. This was something that separated me from my friends. I couldn’t play equally with the other boys with their G.I. Joes, their Six Million Dollar Men, or ~ drool ~ their Mego Super-Heroes. It didn’t even matter that my cousin, who I was always being negatively compared to, had all those toys.

My father eventually gave in, and my tenth birthday was filled with an afternoon of enjoyment racing that stunt cycle up and down my front porch and making him jump the ramps from my SSP Demolition Derby Set. I was in heaven! My sister and her husband got me Evel’s Scramble Van that birthday, but as much as I loved them, it just wasn’t me. The van and its camping accessories were just a bit too much Barbie Dream House for me. So I guess my father really didn't have that much to worry about.

Eventually the magic wore off. The handlebars of the stunt cycle broke off, and Evel’s hands broke off as well. Still, that was one of the best birthdays I ever had.