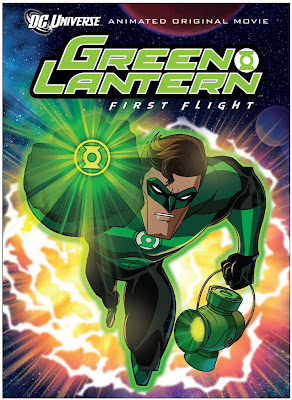 Green Lantern: First Flight ~ How about a bit more Hal Jordan in my Hal Jordan movie please? This is a great Sinestro movie or even a Green Lantern Corps movie – but barely a Hal Jordan one.

This is the first Green Lantern animated feature, so I can understand the creators wanting to throw every element of the characters short of the kitchen sink into the mix – but really, this is not the first time the character’s been animated. We’ve seen various versions of GL throughout most of DC Comics’ animation history, so with his first feature he should have some room for development. If you’re going to give Hal Jordan Green Lantern seventy-five minutes – give him room to grow, to play, hell, how about some space of his own at least?

On the surface this is Hal Jordan’s origin as Green Lantern. An alien crashlands on Earth, giving Jordan a magical ring, whereupon he is taken to the Guardians of the Universe for training and eventually faces off against his evil counterpart Sinestro. It’s a story most comics fans know, and it’s presented well for newcomers – except those newcomers might not realize that Hal is supposed to be the protagonist. 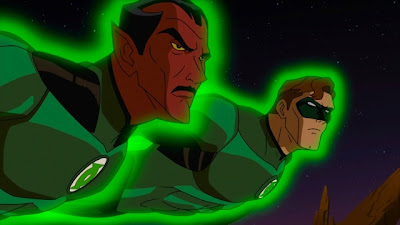 Hal Jordan is there throughout most of the direct-to-DVD feature but soon the real story, that of the renegade Sinestro and the rest of the Green Lantern Corps, takes center stage, leaving poor Hal to almost a supporting role. The subtitle is “First Flight,” but I have to wonder whose.

Don’t get me wrong, I enjoyed it, I just wanted more of the title hero rather than the villain or the supporting cast. I could be really fanboy nitpicky and complain about the insectoid Kanjar Ro and his lack of connection to the GL Corps or about how the true appearance and origin of the Weaponers are changed and glossed over – but I won’t. I guess I would have liked a more Earthbound Green Lantern rather than space epic and a million characters all at once. Maybe next time, or maybe when Ryan Reynolds plays Hal on the big screen he’ll have more to do.

On the bright side, the weirdly anime animation is amazing and lends itself well to space adventure. I would definitely recommend this as worth watching for comics folks, but maybe not worth purchasing, except maybe for the hardcore GL fans.