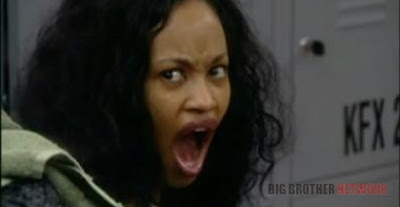 Seems there is one less baby in the Big Brother house today as Chima was removed in the final hour of Showtime coverage last night.

Last night I posted a blog entry about how much the current cast are idiots and big babies. if only I had waited another hour or so I would have had a more exciting ending to the story.

Apparently Chima was asked to wear her microphone, and refused. When fellow houseguest Kevin retrieved it for her, she threw it in the pool. She was asked to get a new microphone by Big Brother and she refused. "You know what? .... this .... I'm outta here."

A house meeting was called and Chima told by producers that she would pay for the damaged mike. That's when the supposed tantrum started with Chima demanding (which she does a lot of, I've noticed) to speak with the producers in the Diary Room. The door to the room would not open, no matter how hard Chima pulled. Lydia tried to open the door crying but is told to sit down, along with Natalie.

When the live feeds to the house came back online following the house meeting, Chima was gone. Jeff had the last word when he said, "and then there were seven."

Good riddance, I say. In reality television there's a thin line between entertaining and irritating, and Chima crossed it some time ago.