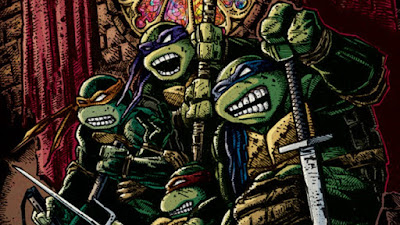 I had mentioned before that I'm not a big Daredevil guy. If that's not embarrassing enough, the next bit will be. My introduction to Stick was Splinter. That's right, the rat sensei of the Teenage Mutant Ninja Turtles, Splinter, was my introduction to Stick, Daredevil's martial arts teacher and enemy of The Hand - or as they're known in the TMNT universe, The Foot. And the thing is, I was only barely aware of the Turtles. 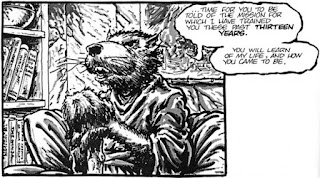 When the TMNT cartoon was hot, a friend who was really into them pointed out that they were originally based on a comic I might enjoy. He thought it was a comic I would dig because it mocked the comics I didn't like. TMNT was a parody of all that ninja mumbo jumbo nonsense that Frank Miller had made Daredevil into. My Daredevil was a swinging swashbuckler in San Fran who fought the Jester, the Owl, and the Stilt-Man - not what I'd seen in that title of late. But TMNT intrigued me. I loved the parody, and shameful as it is, it's where I learned of Splinter, I mean Stick. 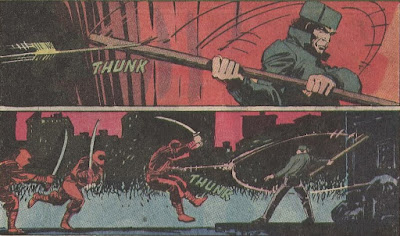 In the comics, Stick was also a blind man, and like Daredevil possessed a kind of radar sense, and so when he encountered the young Matt Murdock, trained him in the use of it. Stick was the leader of a martial arts/super powered group called The Chaste, whose students also included Elektra. The Chaste's mission was to eradicate The Hand. Stick eventually died in that pursuit. He might have also encountered Wolverine back in the 1930s. As I've said, I'm not a big Miller fan, so beyond that, details are iffy in my mind. 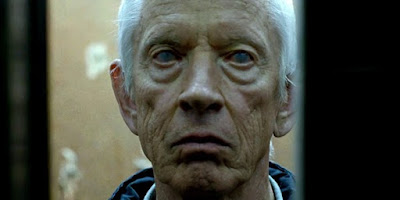 Stick, as portrayed by Scott Glenn, makes his first and supposedly only appearance in Netflix's "Daredevil" in this self-titled episode. Rumor has it that originally showrunner Steven S. DeKnight wanted Sonny Chiba for the role, but I think this works out better. Of course as we see in our pre-credits scene, Scott Glenn is pretty damned Sonny Chiba...

In the opening, Stick is after a businessman in Japan, and by after, I mean Quentin Tarantino style. Somebody is going to die horribly either by gun or sword. Stick is looking for something called Black Sky, and takes first the guy's hand, and then his life to find out what he wants to know. Whatever Black Sky is, it's on its way to New York.

Back in New York the Owl is doing some accounting for Mr. Nobu, and intimates that he knows that his people (are they The Hand?) are bringing something into the docks. Owlsley's intention is an unofficial alliance in case the Kingpin turns on them as he did the Russians, but Nobu will have none of it. Just as they leave and we know whatever Black Sky is, Nobu's people are getting it, Daredevil confronts The Owl, and as he's about to get the info he needs, his prey gets the upper hand and tases our hero. When Stick coincidentally finds Daredevil, it's flashback time. 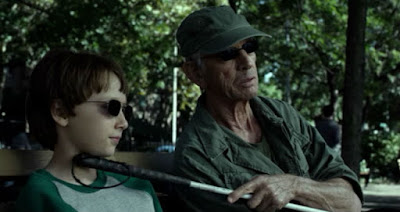 Folks who are regular readers of my reviews know my feelings on superhero secret origins especially in film and television. Get in and get out, or don't mention it at all, and get right to the real story. I was so proud of this "Daredevil" in that they did the origin in just a couple minutes in the first episode. Daredevil is a Silver Age Stan Lee superhero, blah blah blah, radiation creates heroes, villains, and monsters. We get it, move on.

Based on those thoughts, one might think I would hate this episode. Logically you'd be right, but I don't. Scott Glenn, doing his curmudgeonly best David Carradine crossed with Robert Durst, saves these sequences. I love the bit in the park where Stick trains young Matt to open his world and read it, and equally love when he judges the adult Matt for what he's done with his life. 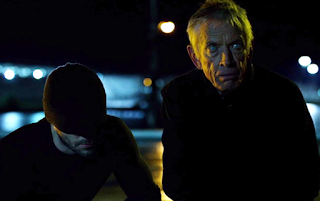 Stick is here in Hell's Kitchen, fighting the war he spoke of so often when training young Matt. This war this night involves the weapon called Black Sky, what Stick refers to as the bringer of shadows. It's not something Matt wants in his world. The two strike an alliance. Matt helps Stick stop Black Sky, and Stick promises he won't kill anyone. Yeah, that's gonna work, especially when he says it Robert Durst style.

We also get a bit of our work triangle - Matt, Foggy, and Karen. Over and above their discussion of the vigilante the paper is calling 'the devil of Hell's Kitchen,' we get just enough of the three actors' chemistry to know we want more. Charlie Cox and Elden Henson are especially good together, as I've said before. Even Foggy knows now what we've known since episode one, Karen is hiding something. Maybe she's a vampire? Oh yeah, that's right. 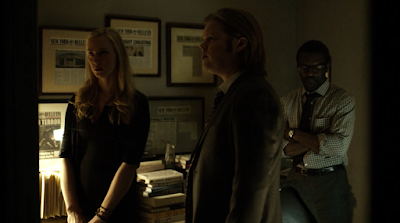 Speaking of Karen and her secrets, no matter how good Deborah Ann Woll and Vondie Curtis-Hall are separately, they unfortunately lack that same chemistry I mentioned above. When Karen and Ben Urich get together to trade notes, even the master actor can't save the scene from seeming awkward and long. At least he's aware he was the target last episode. Perhaps in the future the awkwardness might be saved as Karen finally brings Foggy into Ben's house of cards circle.

Black Sky turns out to be a child, in torn clothes and chains, delivered to the docks in a big storage unit. While Black Sky appears to be a boy, Stick only refers to him with the 'it' pronoun, as if he is a thing. In the comics, The Hand does have an interest in artifacts of supernatural or demonic origin, just as Stick himself has an interest in powered individuals. Witness his seeking out Daredevil and Elektra as students with The Chaste. 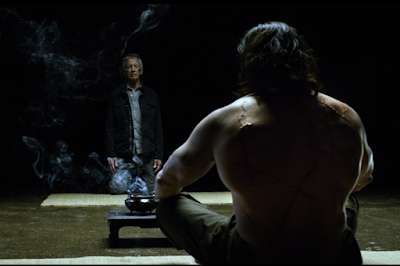 Stick claims to have killed Black Sky but it happens off-screen, and given his past with the truth, I wonder if it happened the way he says it did. "Daredevil" takes place on the edge of a universe of superheroes. Matt and company co-exist with the Avengers but the worlds don't really intersect. I think this is one case where the edges start to blur, and we'll be seeing more from this particular episode in future Netflix series as we build toward "The Defenders."

The appearance of Stone at the end seems to be an assurance of that, whether here, in future series, or in the second season of "Daredevil." Scott Glenn is amazing as Stick, and equally amazing are the fight sequences between him and Matt, both as a kid and as an adult. Props go to Skylar Gaertner as young Matt. The kid is really good too. Excellent episode all around.