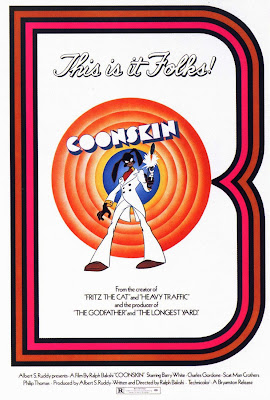 Coonskin ~ Up front, folks, this one may be rough, so if you have certain sensitivities, you might want to skip this review. And, as a white writer in a politically correct world, I also feel the need to tread lightly when talking about this 1975 animated feature by Ralph Bakshi. Like I said, it's rough, take a deep breath, and follow me if you dare.

The opening, visually and verbally is strikingly and disturbingly racist. It's a precursor to what is to come, and sets the pace well. I understood what it was, accepted it for its time, and still winced as if physically struck. No matter how much DMX using the N word one listens to, there's just no preparing for this opening. What followed the racist Vaudeville joke told in animated blackface, was also hard to take, but at least it was full of talent and power. 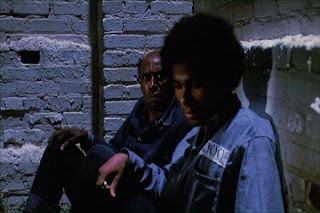 Scatman (Scat Man in the opening credits) Crothers sings the seemingly racist song "Coonskin No More" with liberal use of the N word, but it's an amazing song as well. It's sad that many folks have forgotten what a tremendous talent the man was musically, although he's usually remembered for his acting. After recovering from thinking about how Crothers went from doing "Hong Kong Phooey" to this and then moved on to The Shining, I realized what Bakshi was trying to do, a little song and dance, and a little shock and awe. 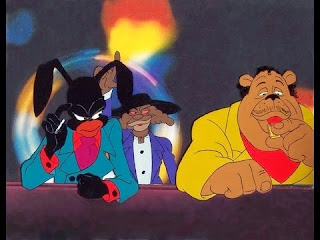 This was his attempt to show the black experience, granted from the eyes of a boy who grew up in a black and Jewish neighborhood in Brooklyn. Bakshi was creating what he called his own ghetto art, blending the genres of blaxploitation, crime drama, and folk tales with a realistic and unapologetic racism that maybe a lot of the world doesn't want to admit existed, or sadly, still exists. Yeah, I'm putting a fancy spin on it, and despite its truth, it's very hard to watch in 2015.

Coonskin is a mix of animation and live action, owing much to The Song of the South as its characters and lessons are similar. The cast also includes Philip Michael Thomas who later gained fame on "Miami Vice," Pulitzer Prizing winning actor/director/writer Charles Gordone, and the one and only Barry White. The actual story is very seventies, so seventies in fact, I am sure that Quentin Tarantino loves this flick. And he does. 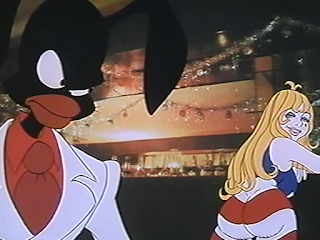 About an hour into Coonskin I realized that I had in fact seen some of it at least before. Doing a little research I learned that it had also been released as Street Fight, which is where I saw a bit, and also Bustin' Out. This is not a great movie, it's not even a good movie. There's a lot going on, a little bit of everything, with very little to hold it together. Some interesting animation, and music, some intriguing commentary on race, but also a lot of the usual crap like sex and drugs that Bakshi throws into everything he does for no reason.

I can't recommend Coonskin, except for the curious, the fans of folks involved, and those with strong stomachs and high tolerance for the politically incorrect. Watch at your own risk.