As I watched the finale of "The Late Show with David Letterman" last night I couldn't help but remember how much a part of my life the man was and is. Now I have to be honest, I haven't really paid all that much attention to Letterman since he moved over to CBS, but I did watch both "Late Night" and "The David Letterman Show" which aired on weekday mornings in the early 1980s.

As far as the morning show went, I remember laughing out loud at it, and my mother thinking I was weird because she couldn't figure out what was so funny. I also recall when "Late Night with David Letterman" came along he would refer to that morning show as 'way back in the late fifties.' Before this of course I knew Letterman from his stand-up comedy and guest-hosting on "The Tonight Show." 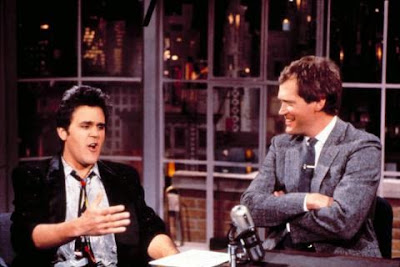 This is the way I first met Larry 'Bud' Melman, Chris Elliott, and Stupid Pet Tricks, the most memorable (and disturbing) of which had a dog drinking milk from his owner's mouth. I remember frequent guests Sandra Bernhard, future frenemy Jay Leno, and fellow only-New Yorker (at least at the time) Howard Stern. I was much happier when I could see the show on channel 3 finally, and remember seeing great acts of the day like R.E.M. and Indigo Girls.

Still, even though I hadn't watched much of "The Late Show," I'm sad to see Dave go. Last night's viewing only cemented the reasons that I should have been watching. Have a great retirement, Dave, come back and visit some time.