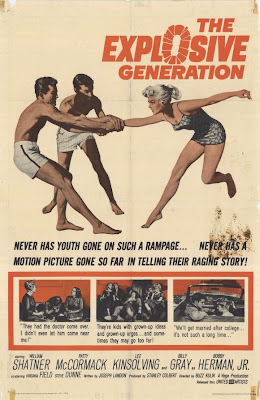 This film was brought back to my attention when I saw on the Facebook that my friend Rob Kelly was planning on watching it. A day later I saw that The Works was showing it. Curiosity piqued, I set the DVR and got ready to be dazzled.

As the title might imply, this 1961 black and white 'classic' is all about wild kids growing up too fast. Think more Eddie Haskell, or the Jets and Sharks without knives, as opposed to say Clockwork Orange or Class of 1984. The real selling points of this one however are the pre-Star Trek William Shatner and the post-Bad Seed Patty McCormack. Also look for Edward Platt, The Chief from "Get Smart," as the principal. 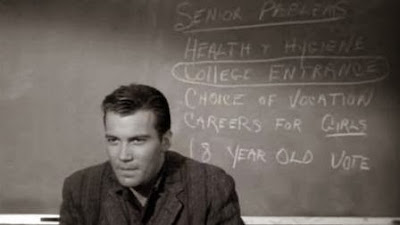 Shatner is the 'cool' teacher, and in trying to get the kids to talk about their problems, he invites an open discussion of sex in the classroom. Yeah, reality check, it's 1961. This was brave territory for the time. McCormack, who was a much more believable actress as an evil little girl, is a student with a problem.

All hell breaks loose when the parents get wind of what's been going on in the classroom. They lose their minds and try to put a stop to it. The whole business gets Shatner suspended and the students fight back with a good old-fashioned protest, of course in the days before such things were in vogue. 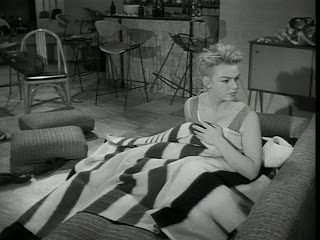 I dug the jazzy timely score by Hal Borne, who's also done such varied soundtracks for classics like Promises Promises and The Big Store, and later 1989's Family Business. And why yes, that is a baby-faced Beau Bridges as Mark, and the accent-less Stafford Repp, a few years before his Chief O'Hara from "Batman," as a police officer.

And yes, I'd seen this one a few times before, but forgotten. Heck, I had even forgotten I'd given it a quickie review back in 2009. Hopefully this is a bigger better review. Well worth a look.