We begin this episode on the far end of our first real cliffhanger, Daredevil at the scene of the crime and surrounded by the police. It's a superhero staple, especially in the early days of a superhero, and it is also a turning point. From this moment on, once the police become involved, the as-yet-unnamed Daredevil goes from urban legend to real live masked vigilante. 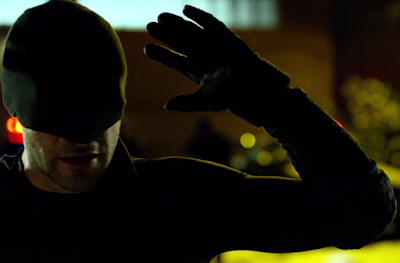 In another of Philip Silvera's wonderful fight sequences, Daredevil takes down several armed cops, wait for it, while handcuffed. Daredevil fight scenes make the viewer cheer, fist pump, and root for the hero. No matter how brutal, they are creative, original, and usually works of cinematic art. And in most cases the hero comes out on top, making one like them more. This is what is needed in superhero television (I'm looking at you, Arrow) and comics more, not misery after misery, but triumph, even if it's a small triumph. 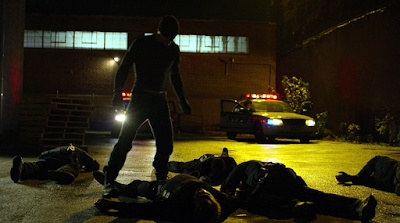 As Daredevil escapes with beaten and wounded Russian boss Vladimir, the Kingpin has blown up all of the Russians' bases of operations, and we start to learn just how much of the police are in Fisk's pocket. Daredevil struggles to keep Vladimir alive so he can get him to tell him where to find Fisk, while the police hunt them both. So this is a bit trickier than the initial hero vs. cops scenario I originally described. The villain owns the cops. 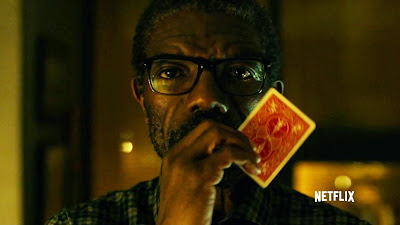 Vondie Curtis-Hall as Ben Urich emerges as the one voice of reason and responsibility in the whole city in flames scenario. He knows there a connection here, we see him trying to put the pieces together, ironically with a deck of cards on a bulletin board - one giant house of cards. There's a nice touch with the corrupt police not just subtly threatening the reporter but pointing out the TV news crew as the meteor to his dinosaurs. He stands strong though, and even the Kingpin seems to know Urich can't be bought. Urich is the one-eyed man in a kingdom of the blind. 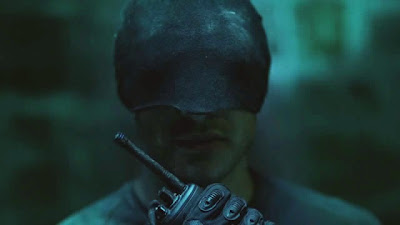 Cornered in an abandoned warehouse, surrounded by police, as the city burns around them, Daredevil tries to coerce a confession from Vladimir. I laughed out loud when the Russian namedropped Leslie Shumway, Al Capone's accountant, but he's right. That's how you get the big guy, you get the money man. Unfortunately, once that is out in the open, no names from Vladimir of course, all hell breaks loose. 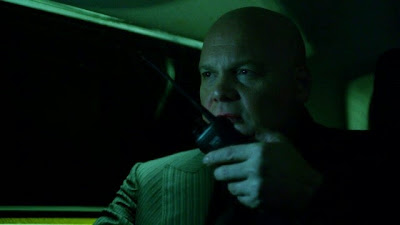 The first encounter between Daredevil and the Kingpin, neither man using their traditional comic book names, yet, if at all, is via police radio, with a very James Bond-ian vibe. It's been done before, but it's still done well here. The villain offers a deal, the hero doesn't take it, and eats the consequences. Shots are fired, a bullet meant for Urich hits one of Fisk's cops, and as corrupt S.W.A.T. enters the warehouse, footage is leaked to the TV news that links the masked vigilante to not only the Russian mob, but also the shootings, and the explosions.

It looks like dark days for Daredevil, but there is one ray of sunshine. Vladimir finally gives him what he wants. Before he makes his last stand with S.W.A.T. So Daredevil can get away, he finally gives the masked vigilante a name - Leland Owlsley.