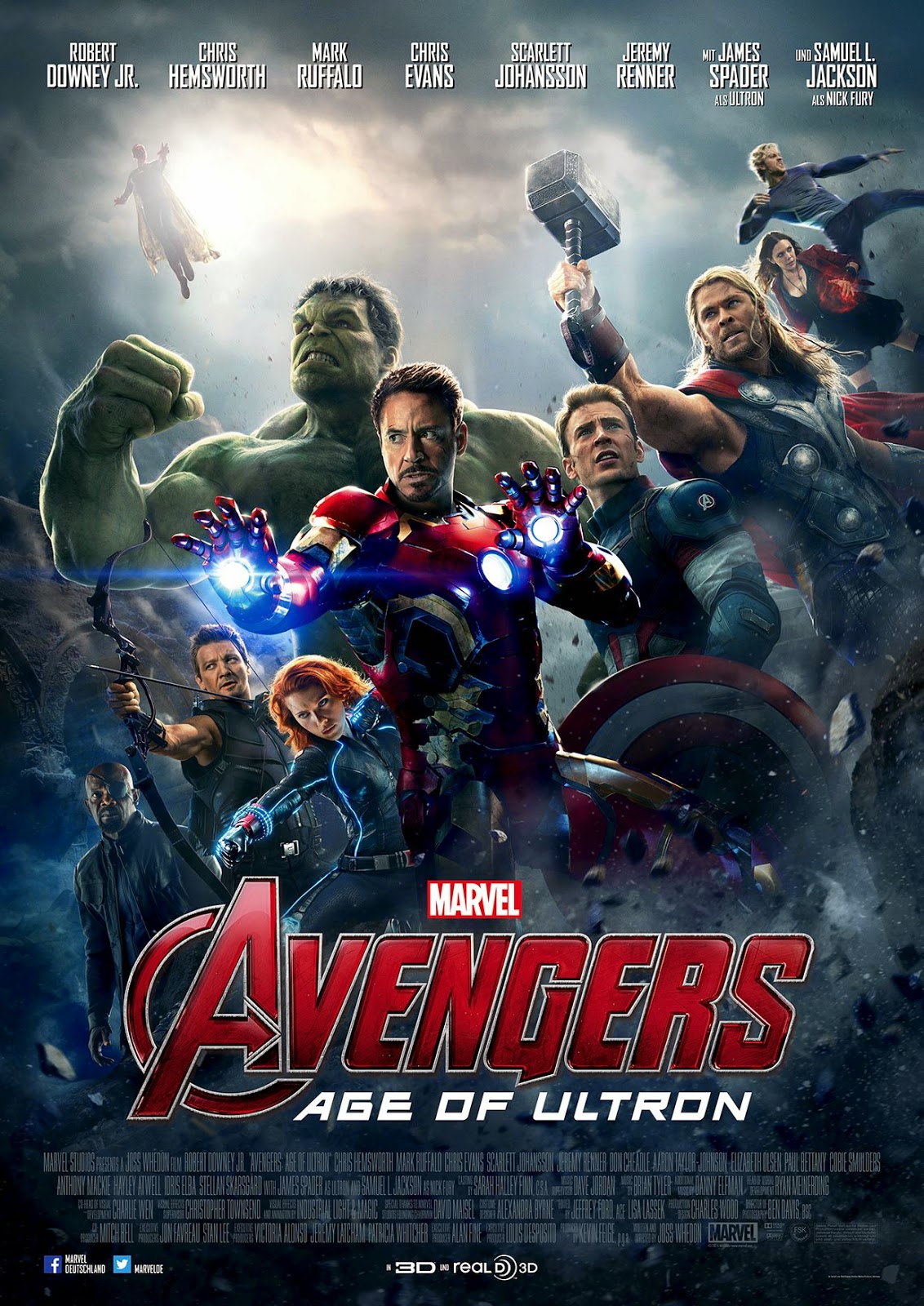 Yesterday I talked about re-watching the first Avengers film before seeing the new one. Today I'm tackling Avengers: Age of Ultron. Be warned right here right now, there will be spoilers.

Wow. When I walked out of the theater I saw a text from friend, fellow South Jersey Writer, and fellow Biff Bam Popper, Jim Knipp. He'd also seen the movie last night and wanted to know what I thought of it. I had to ponder the answer for a moment, then I typed back, "I didn't hate it."

I didn't hate it. I also didn't love it. I'm not even sure I liked it. In choosing Ultron as the antagonist, writer/director Joss Whedon must have known he was starting off on a bad foot. As I talked about in my article about Ultron over at BBP yesterday, without Hank Pym, there really is no Ultron. Without that creepy Oedipal complex and family connection to the Avengers, Ultron is completely interchangeable for any killer robot, and thus loses his charm and uniqueness. 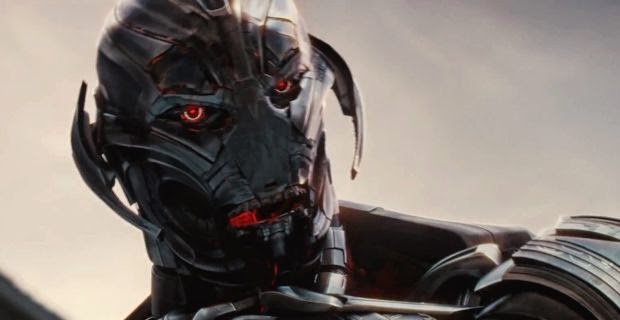 So right out the gate, Whedon is already off-book by having Tony Stark and Bruce Banner create Ultron. Joss seems determined to stay off book, from the Hulk/Black Widow romance to Hawkeye's family to the almost complete ignorance of the "Agents of S.H.I.E.L.D." television series and events, it's like he wants to build his own continuity outside of the established Marvel Cinematic Universe. He's not just off-book, he's off the rails. 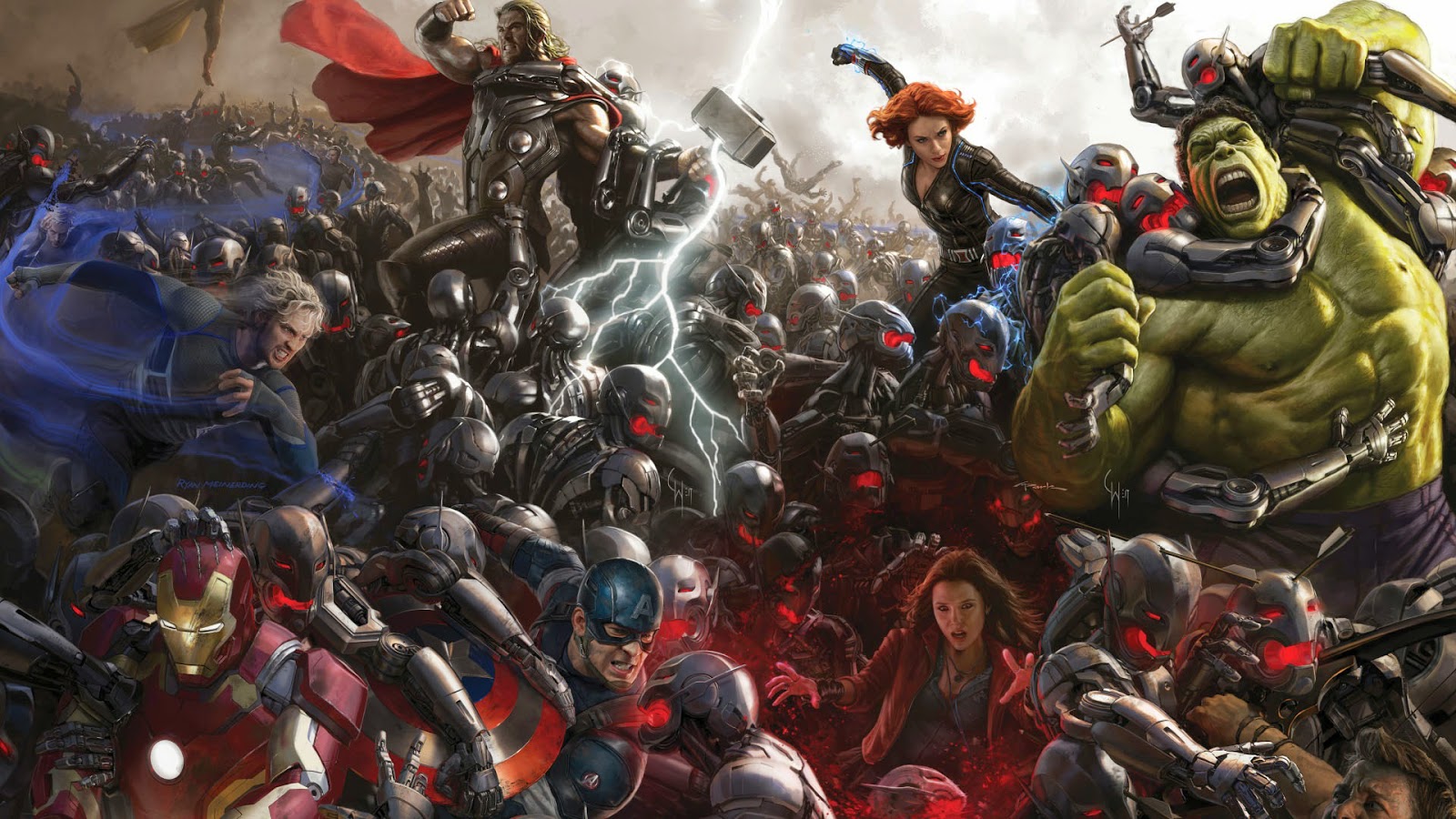 What it results in is an uneven film, a badly structured story, a disappointing film for comic book fans, and believe it or not, a boring film for action fans. There are multiple holes in the plot, illogical motivations, and probably many deleted scenes we'll have to wait for home release to see, but as is, this was unsatisfactory.

Let's start with S.H.I.E.L.D. Much has been made of Joss Whedon's comments regarding "Marvel's Agents of S.H.I.E.L.D.," but the facts are that not only is his brother a showrunner, but Joss is also a co-creator and executive producer on the show. His comments about the show invalidating his first Avengers movie can only be taken so far, and yet, the events of that TV series are both ignored and avoided in the new film. S.H.I.E.L.D., for all intents and purposes, no longer exists. This is a serious break in the continuity of the Marvel Cinematic Universe. One could probably get their fill of No-Prizes explaining away how it does fit, but it doesn't fit well. 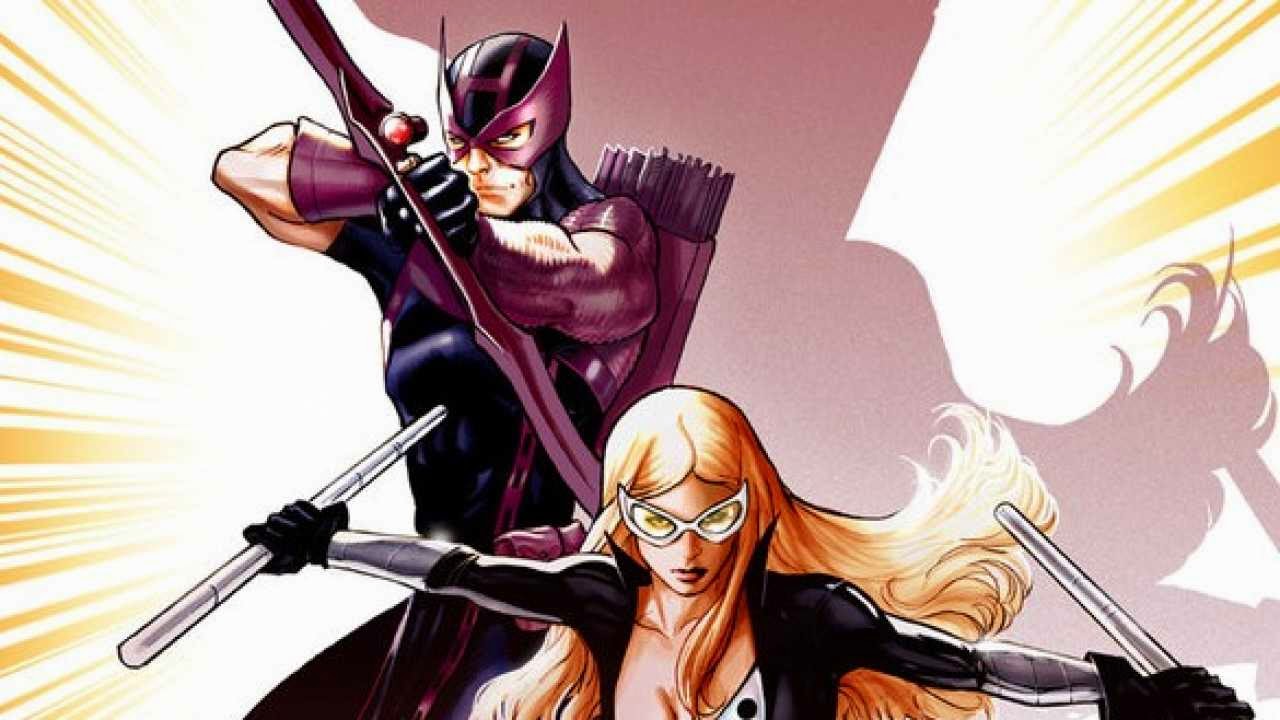 Spinning off of the S.H.I.E.L.D. issue is the presence of Hawkeye's family. In the comics the Black Widow is not just a close friend and partner, she's a former lover of Hawkeye. More than that, Bobbi Morse AKA Mockingbird, a prominent character on the "Agents of S.H.I.E.L.D." TV series, and soon to be star of her own spin-off, is Hawkeye's ex-wife, lover, and partner in the comics. On the show, a source of drama revolves around her working with her ex-husband Hunter, a character that doesn't exist in the comics.

Now don't get me wrong, I like the idea of movie Hawkeye having a wife and kids, and I'm a big Linda Cardellini fan. Whedon is obviously one of those fans who doesn't like Hawkeye, and dismisses him as just a guy with a bow and arrow. I'm sorry, just my opinion, but if you don't like Hawkeye, you just don't know Hawkeye. He is one of the most effective, most resourceful, and one of my favorite Avengers. And that's one of the biggest problems with movie Hawkeye not being comics Hawkeye.

The wife and kids goes against the comics history of the character, but it lends not only some background, but also some grounding and humanity to character. We understand him and care about him more. And of course it's always nice to see more of Jeremy Renner on the screen. And as far as comics vs. film continuity goes, perhaps Hawkeye and Mockingbird just haven't met yet.

Similarly the Hulk/Widow connection is a fiction of the films rather than the comics, however it's one I don't mind. While clunky at times, the party especially, it works, and succeeds in developing both characters. And except for the one bit where our only female Avenger is the captured damsel in distress (I hated this so much), this relationship, and the performances of Scarlett Johansson and Mark Ruffalo, is one of the best features of the film. 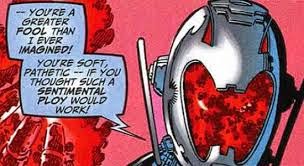 Speaking of the Hulk, the CGI effects were far superior this time than last. The Hulk resembles Ruffalo, has more emotion in his facial expressions, and moves nearly flawlessly with the live actors. Ultron on the other hand is terrible on that point. I was creeped out every time his lips moved, his eyes blinked, or had any facial motion. He looked like a badly formed Muppet. I wish his face had been unmoving metal, and they had kept the terrifying George Perez visage from the comics. That's the real Ultron. James Spader was a good choice for the voice, but every time the CGI Ultron physically spoke I was taken out of the film. 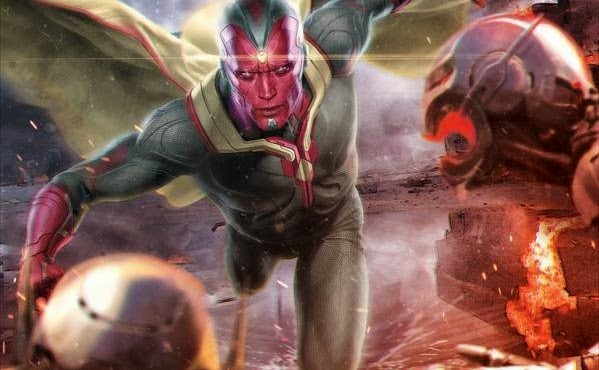 Paul Bettany's Vision was well worth the price of admission though I wonder why it was so hard not to make him look like he does in the comics. I found his design (I hated his head) unappealing to say the least. His actions - from his interaction with the Scarlet Witch (there is one look between the two when he rescues her at the end that is perfection) to his fighting style to his final confrontation with Ultron - were all wonderful. There should have been more Vision. Speaking of more, I loved seeing War Machine and the Falcon, but where was the Falcon in the final battle? He should have been there.

Some folks might poo-poo this one as set up for future movies, but I loved the bit with Andy Serkis as Ulysses Klaw (they spell it Klaue, but we all know it's Klaw). Over and above Ultron, Klaw was an engaging adversary here, and I would have loved if not an appearance by Prince T'Challa, at least a mention. I guess I'll have to wait until Captain America: Civil War or Black Panther for that… 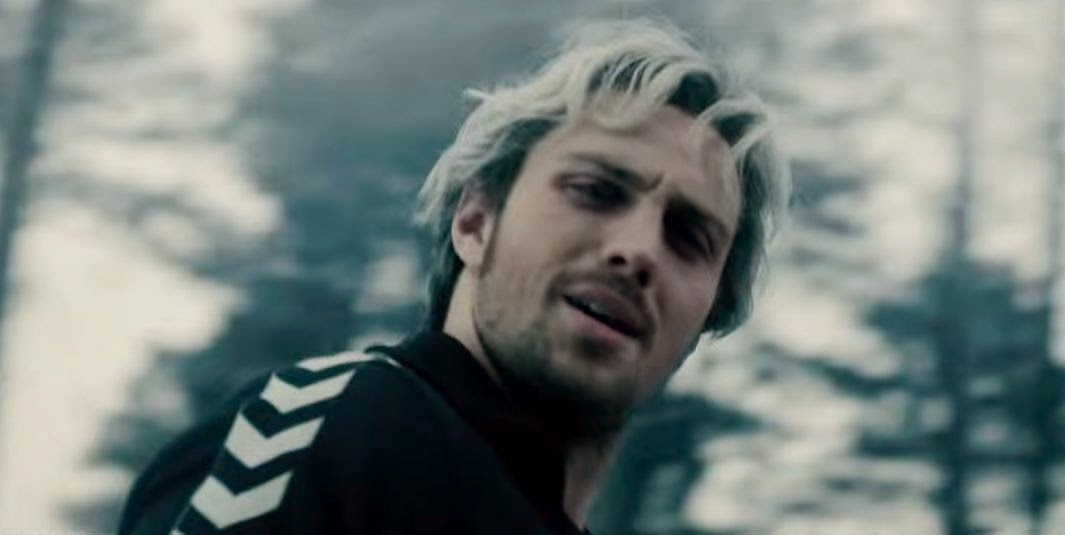 I have to make a confession. I have never liked Quicksilver. And it's not just that he's a third-rate Flash, he's also just a complete jerk, always has been, always will be. Pietro has always been too overprotective of his sister Wanda, an annoying wet blanket for everyone else, and when he freaked out about his sister's relationship with the Vision - he was borderline, if not dead-on, racist. Quicksilver, as far as I'm concerned, sucks.

What is fascinating however, is that much like Hawkeye, film Quicksilver -whether it's here in this movie, or over in X-Men: Days of Future Past - is sooo not comics Quicksilver. The films have made Pietro cool. I find it amusing that Joss Whedon, infamously noted for killing his characters, has found a way to solve the problem of Quicksilver being so annoying… he just got rid of him.

I'm glad Whedon simplified the Scarlet Witch's powers, even if one of them was merely a plot device to reveal secrets from the Avengers' pasts. I wish there had been more of that, and it was nice to see Hayley Atwell's Agent Carter if for only a few seconds. I would have liked to have seen more of the Red Room from Widow's flashbacks as it might have clarified the connections to the "Agent Carter" TV series. 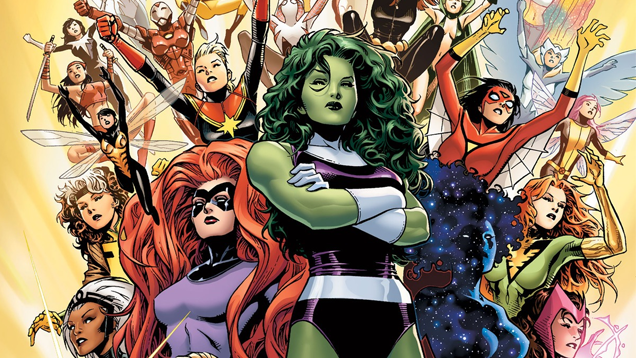 Speaking of women, I was very disappointed to find no Pepper Potts or Jane Foster in the film. They were sorely missed, and the women we had were sorely used. I struck up a conversation with a gentleman while waiting in line who was wearing a Black Widow t-shirt. We talked about the lack of merchandise with female heroes, and women around us, many wearing Avengers t-shirts chimed in as well. To paraphrase Field of Dreams, if you make it, they will buy it. Are you paying attention, Marvel/Disney?

As far as Avengers: Age of Ultron goes, I was not thrilled with it. I did not leave the theater charged up and anxious to see it again as I did with the original movie. I left feeling empty and disappointed. With the knowledge that I would be seeing it again Sunday night with The Bride, I seriously wondered if I really wanted to see it again, and I think that says volumes.