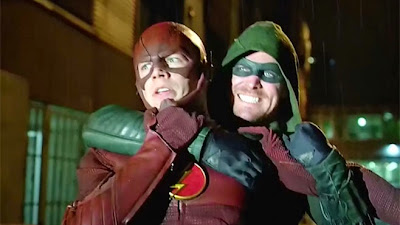 If you read my review of last week's episode of "The Flash," or saw it, you know that Arrow came to the aid of his costumed friend in Central City to help take down the Reverse-Flash. You also know that Arrow in turn asked for the Flash's help. One would assume that help would come in this, the season finale of "Arrow." It does. And if that's all the help the Flash is going to be, Arrow sooo got the short end of the deal. 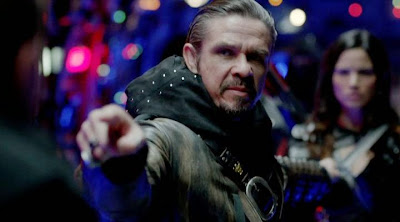 At the end of the last episode Team Arrow was left in a dungeon dying of the Alpha and Omega virus, while Oliver and R'as Al Ghul were on their way to Starling City to wipe it out with the virus. The good news is that Malcolm was able to inoculate Team Arrow with a method that would have made the 1966 Batman proud, while the Flash secured the Nanda Parbat headquarters and released our heroes. Then he went home, quickly, but nowhere near as quickly and mysteriously as Team Arrow went home. Are we sure Starling and Tibet aren't like next door to each other? This is getting ridiculous. 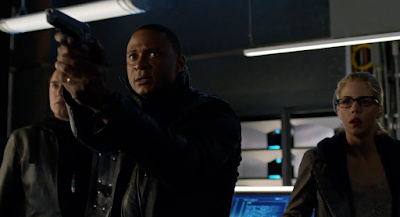 Oliver plays his hand on the plane over Starling and turns on R'as, who of course escapes with the virus, and the only parachute. Seriously, is this a joke? The only parachute?? Nevertheless R'as swears vengeance and Oliver and Nyssa crash-land the plane. They join Team Arrow where Oliver gets his ass kicked physically and verbally by Diggle and Felicity. Good. 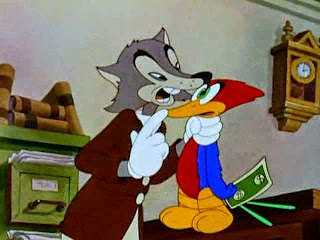 Hindsight on dumbass Oliver's plans almost always add up to the same problem - trust. Just trust someone, let them in on what is planned. I can't help thinking of that old Woody Woodpecker cartoon where if Woody had only gone to the police in the first place, none of this would have ever happened. If Oliver has only just said a few words to Diggle and Felicity, even as simple as, "Trust me, no matters what happens, or how it looks, just trust me." all of this could have been avoided. 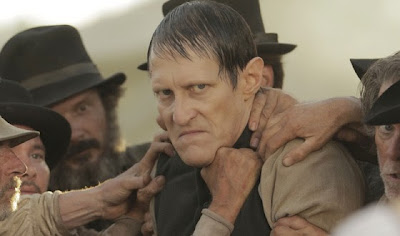 As Team Arrow searches for R'as in Starling they discover what his real plan is. His enemy Damien Darhk is in the city, R'as wants to kill two birds with one stone. Darhk's assistant is portrayed by Christopher Heyerdahl, who played one of the most sinister villains in recent television memory - The Swede from AMC's "Hell on Wheels." This alone made me think that it was really Darhk pretending to be his own assistant. Ah, such a fleeting moment and a sweet cameo. Word is Darhk will be one of the big bads, if not the big bad next season. 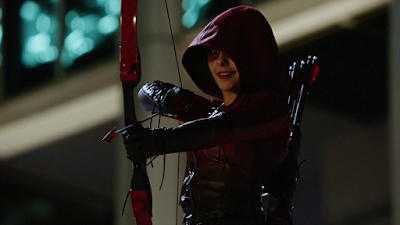 There is a considerable amount of resolution this episode, almost as if the series was ending. Diggle leaves over the differences with Oliver, although rumor has it he won't be gone long, with a costume in his future. R'as dies at Oliver's hands, the mantle going to Malcolm, as pre-agreed. Thea is now Speedy, who along with the Black Canary, will be protecting Starling City. Katana has returned to seclusion. Roy is gone, for the moment, and the Atom blew up real good. Oliver and Felicity have driven off for the coast, like they're in the end of Blade Runner, presumably to live happily ever after. 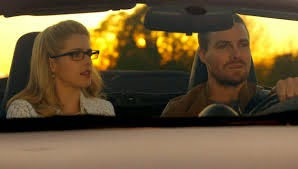 This is not the end however, it's only the end of the season. Stephen Amell has said that Oliver won't be the Arrow any more. That's a bit of misdirection, hinted at when Thea suggested 'Red Arrow' as her codename. Oliver will not be the Arrow any more (and really he can't be in light of Roy taking the rap for him), but he will be Green Arrow. Finally. And as for the Atom, we know he'll be back in "Legends of Tomorrow."

There's a nice shout out to writer Denny O'Neil and artist Neal Adams, as cross streets. They not only created R'as Al Ghul but also redesigned Green Arrow for more relevant times, producing some of the best (in my opinion) stories about both characters. There's also a Marc Andreyko namedrop later, his being the creator of the Kate Spencer version of Manhunter. Here is some reading for later about how one writer thinks they wasted her character. I kinda agree.