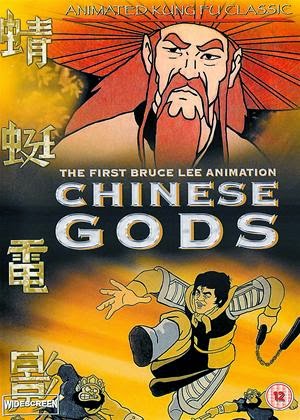 Chinese Gods ~ This one is another film lost to the legal video/DVD generation, and in most cases, like with me and Dead Is Dead or Poor Devil, is one some folks are unsure they remember correctly or perhaps remember seeing at all. Sometimes known as Chinese Gods, or The Story of Chinese Gods, or simply the unlikely Bruce Lee cartoon, its real title is Pang Shen Feng.

Created in 1976, with a character drawn to look like Bruce Lee, I first discovered this on Saturday afternoons in the early eighties where it invariably showed up as part of the martial arts flicks on UHF. I have to wonder what the regular kung fu and Shaw Bros. fans made of this animated feature mixed in with their standard fare.

The simply animated film, with old school anime flair and just a touch of Yellow Submarine surrealism, loosely strings together a handful of tales from Chinese mythology into one story full of bizarre visuals and wild martial arts fight sequences. Be warned ahead of time, this is not for kids. There are adult themes and concepts, and quite a bit of violence and sexual innuendo, even blood and a bit of nudity.

Chinese Gods starts a little slow, but once the strange creatures, monsters, and demons start showing up, it gets quite good. I remember being so entranced with one such beast - the nine-tailed fox - that I wrote it up and used it against my players in a Dungeons & Dragons campaign. Here the nine-tailed fox gives Bruce Lee a run for his money. 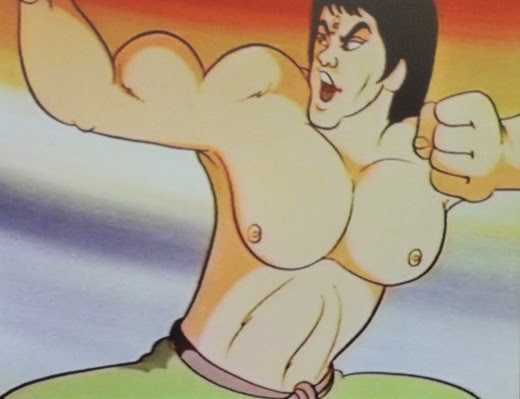 The one fighter with third eye bears more than a passing resemblance to Bruce Lee. This homage was obviously well meaning and long labored as it's very close to the real thing. From poses to fighting stances and styles, this Bruce Lee, and it's a hoot to see him not just in period garb, but also fighting magical creatures. It takes a downturn however when he becomes a dragon, not a cool dragon, mind you, but more like Pete's Dragon.

There's also the half-naked kid who flies by riding fiery wheels on his feet. Did I mention how surreal yet cool this flick is? I thought Chinese Gods stood the test of time and was well worth seeing again. It's definitely available on YouTube here, and might also be on out of print VHS or bootleg DVD. Good but surreal fun.