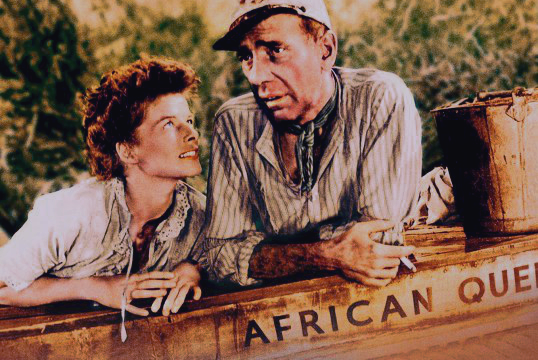 The African Queen was one of my parents' favorite movies, and I think it might have also been one of the last movies they saw together in a theater. It was one of those films that whenever it came on TV we all had to watch it with ongoing commentary of the 'just wait for this part' type. Things I remember especially from childhood include the leeches scene and Bogart's rumbling stomach. I also dimly remember a game show that re-enacted scenes from classic movies having contestants re-do the final act of the film in an above ground swimming pool. Was it "Don Adams' Screen Test"? Maybe. Weird. 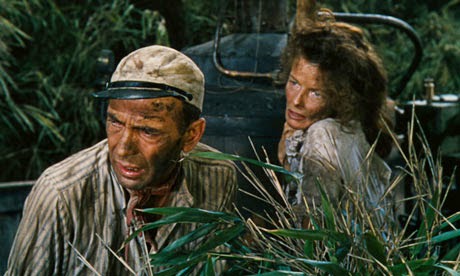 This rather simple film on the surface about a riverboat captain and a missionary who fight back in their own way against the Germans in Africa in World War I is extremely complex and works on several levels. One could call it a romance, an adventure, a war film, even a battle of wills between the two leads, but what it really is, is a classic film, perhaps one of the best ever made. And while not based on a true story, it was based on a real boat, as I mentioned above.

Katharine Hepburn is a missionary with her brother, Robert Morley, in German East Africa whose only connection to the rest of the world is Humphrey Bogart who visits every few months with mail and most recently news of war. When next Bogart returns, the village and church has been burned, the villagers taken away, and Morley dead. Hepburn not only hitches a ride with Bogie to safety but also hatches a mad plan to get even with the Germans, as a proud citizen of the British Empire. 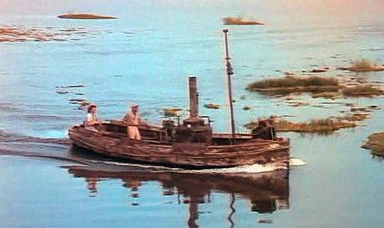 The African Queen is also a romance on fast forward. We go from first meeting through the entire cycle of a relationship on the trip down the river until finally marriage seconds before being hanged, nice metaphor there by the way. It's an adventure, a romance, even a war story, and it stars two of Hollywood's finest in memorable roles. This is a classic do-not-miss film, and I was thrilled to see it on the big screen, and see the real thing afterward, awesome!