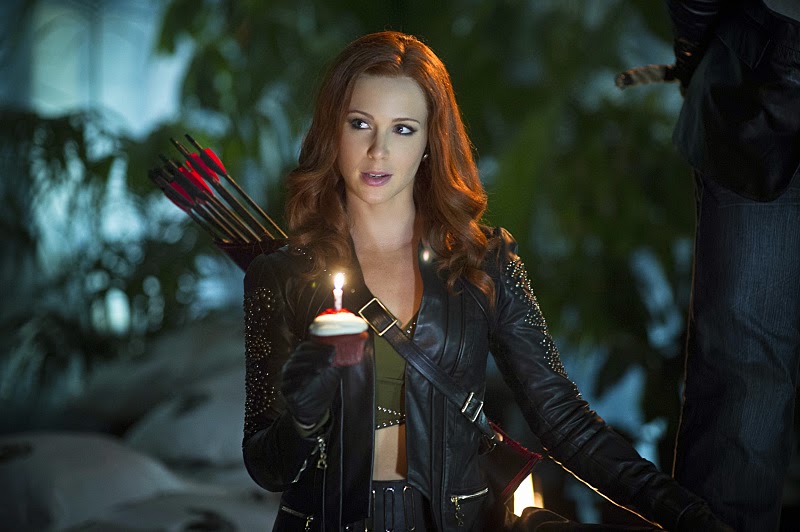 Back in the day, the 1950s to be precise, Green Arrow wasn't nothing but Batman with a bow. Millionaire playboy with a masked alter ego, check. Young ward/sidekick, got one. Cave headquarters, themed vehicle and arsenal, got them too. He even had a signal in the sky and an arch criminal clown for a recurring bad guy. Much like Batman had Catwoman and Poison Ivy, Green Arrow had his share of romantic interests/opponents as well. 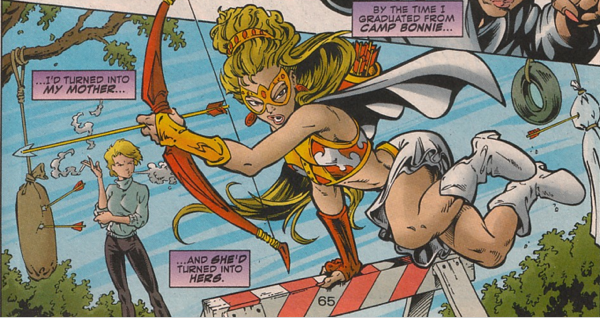 Most notable is Miss Arrowette, who for decades was lost to the mists of time until resurrected in the Young Justice comics as the mother of new member Arrowette. Like similar villainesses, like the aforementioned Catwoman and the Harlequin who pestered the Golden Age Green Lantern, Miss Arrowette may have posed as a criminal, but she really had a soft spot for Green Arrow, which could reform her at the drop of a bow. 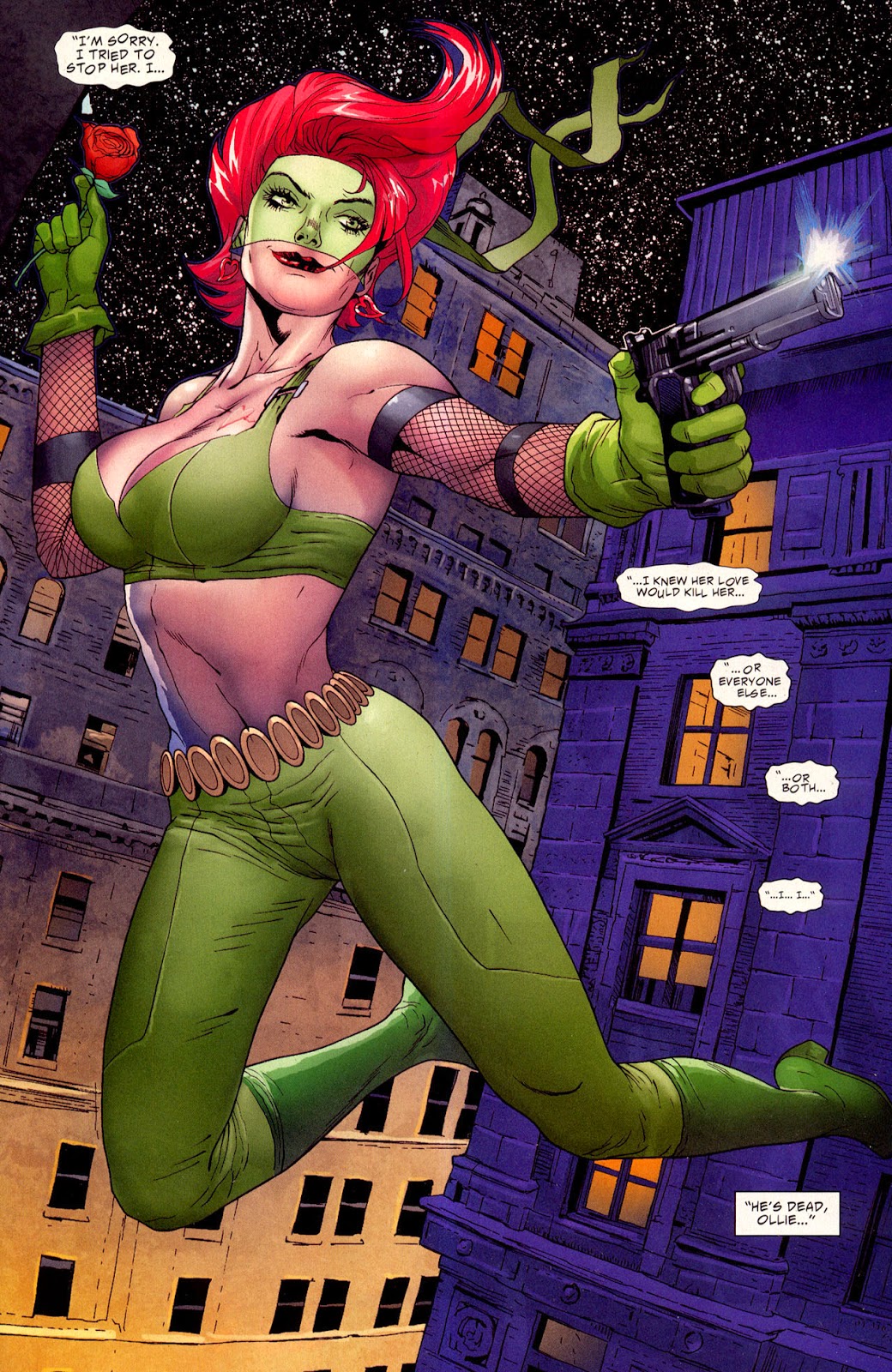 In the Modern Age, a new darker take was tried with an Arrowette-like character. This one however was a full-fledged sociopath, and her name was Cupid. "Arrow" showrunner Andrew Kreisberg created Cupid himself for the Green Arrow/Black Canary comic in 2009, so really it was only a matter of time before she showed up live action. CW veteran actress Amy Gumenick plays the bow and arrow armed villainess obsessed with Arrow on the TV series, and she is very good at psycho. As far as psycho girlfriends go, I much prefer Gumenick to Jessica DeGouw's Huntress.

In the Felicity subplot, she delivers the best line of the episode while watching Brandon Routh's shirtless Ray Palmer doing the salmon ladder in his office, "Oh god, I have a type." It still creeps me out that Ray thinks he can buy Felicity's love, but I kinda dig how Routh is out-barechesting Stephen Amell. I never really thought of the Atom being so buff though. I guess you miss it because he's so small. And just wait, it looks like he'll be getting smaller. 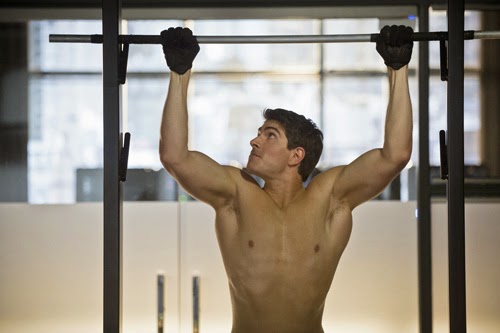 Just like in the comics, Cupid finds an arrow shot by Oliver in a previous battle (Brother Blood's assault on the city in this case) and fixates on it. She begins hunting Arrow's enemies and killing them, for him. Her lair, a love nest that would make any stalker jeal, is really really crazy ex-girlfriend creepy. Over at "The Flash," Cisco usually names the bad guys, and here Felicity pegs Cupid as 'Crazy Pants.' I like that name better.

At last in Flashback Hong Kong, we not only have a few nice moments between young Oliver and Tatsu, but finally we get to see Katana in action. Thea finds a potential new boyfriend in a really annoyingly cliché subplot, and Oliver pushes Felicity into the arms of Ray Palmer, only to change his mind too late. I'm also happy to see the name Arsenal in use finally as well. 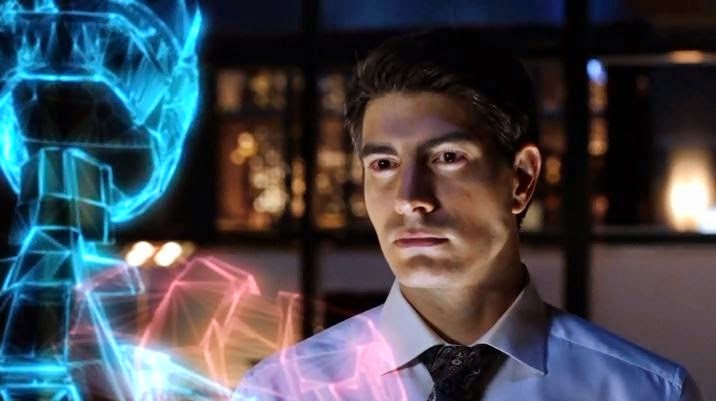 Lots of DC Comics name drops this time out. There's St. Walker most famous of the Blue Lanterns, Baron Street in homage to writer Mike Baron, and Sherwood Florist which in the comics was the flower shop run by Dinah (Black Canary) Lance for years. And of course, rather than Iron Heights, Cupid is put in with the other inmates in the Suicide Squad, and an indirect reference is made to Harley Quinn. The biggest Easter egg however is Palmer hunting white dwarf alloy and revealing his A.T.O.M. suit of armor.

This is also the second episode in a row to end with a sneak peek at the next episode's villain of the week. I'm not sure I like that. It just seems a little bit too much Batman '66 for me. In this case, we get another "Spartacus" alum Nick Tarabay as the decidedly non-Australian Digger Harkness AKA Captain Boomerang.

Next: Flash Vs. Arrow!

And remember to see all of my reviews of the "Arrow" series, click here, its companion series "The Flash," click here, and if you'd like to discuss the latest episodes on Facebook, here and here.