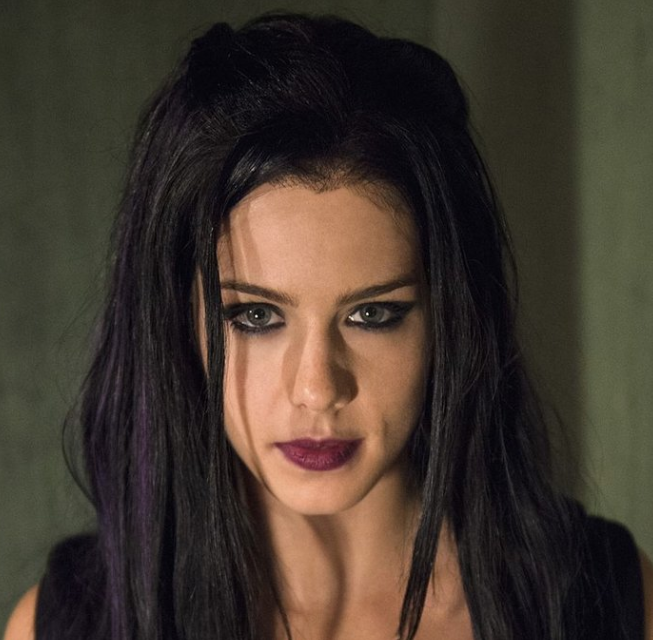 Being a hardcore comics fanboy, I appreciated the comics title of this episode, and it's about time we learned the television origins of Ms. Smoak. Like many elements of our sister show "The Flash," Felicity Smoak comes originally from the pages of Firestorm comics. Much older and brunette in the comics, Felicity ran a software firm and eventually married Ronnie Raymond's father. Much like her TV counterpart, she was burdened with secrets as she knew that Ronnie was part of the Firestorm entity. 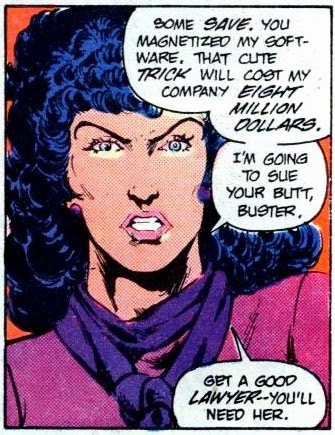 We open on a wonderful and intense training montage - Oliver and Roy, Laurel and Ted Grant, Thea and Malcolm - followed as Thea asks what normal people do in the morning, cut to Felicity doing sit-ups to the TV. Ray Palmer shows up, followed by her mother. Felicity is not pleased. Donna Smoak is Charlotte Ross, like Barry Allen's Grant Gustin, another choice from "Glee." Mom is so far from our girl, Ray asks if she's adopted. Also, why does Ray have to seem so slimy? Or is that just Brandon Routh?

After a quick flashback to Felicity's college days as a goth hacker whose boyfriend is a bit of a mad hacktivist (and obviously, maybe too obviously as we'll see, our villain of the week), the real story begins. The power grid of Starling City goes out and then only TV monitors come back on with an image of Sauron's eye delivering an ultimatum. It calls itself Brother Eye. I'm betting on the flashback boyfriend or his roommate, but we'll see. Either way, Emily Bett Rickards looks good goth. 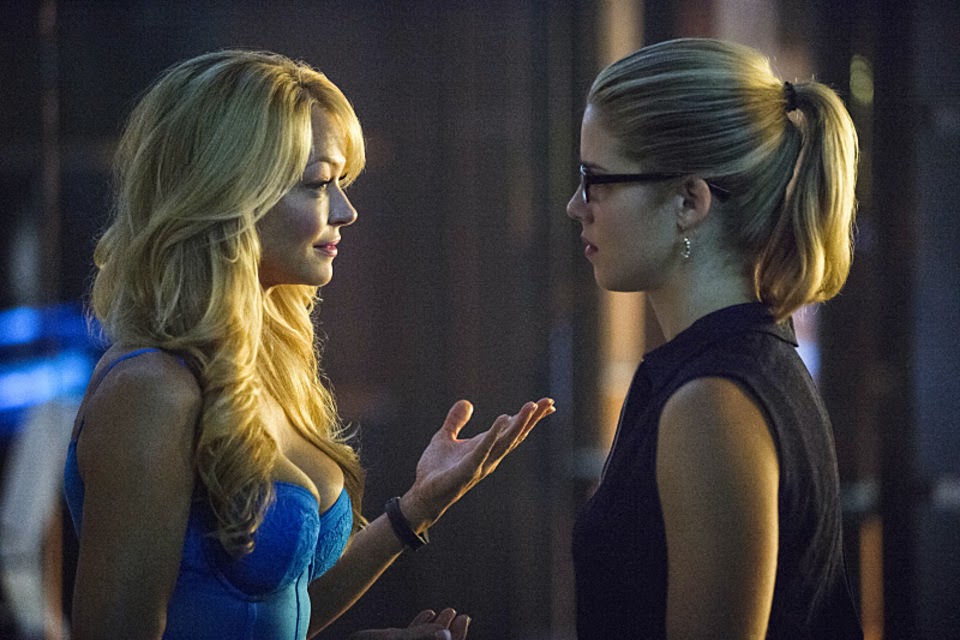 Brother Eye is a machine with a long and storied past in the DC Comics, originally created by the great Jack Kirby. Brother Eye is OMAC's advisor, controller, companion. Originally OMAC stood for One Man Army Corps, but later versions have been translated as Omni Mind And Community and as Observational Metahuman Activity Construct. OMAC is, in most versions, a good guy who gets his incredible strength and other abilities from his machine cohort, usually an orbital satellite called Brother Eye. 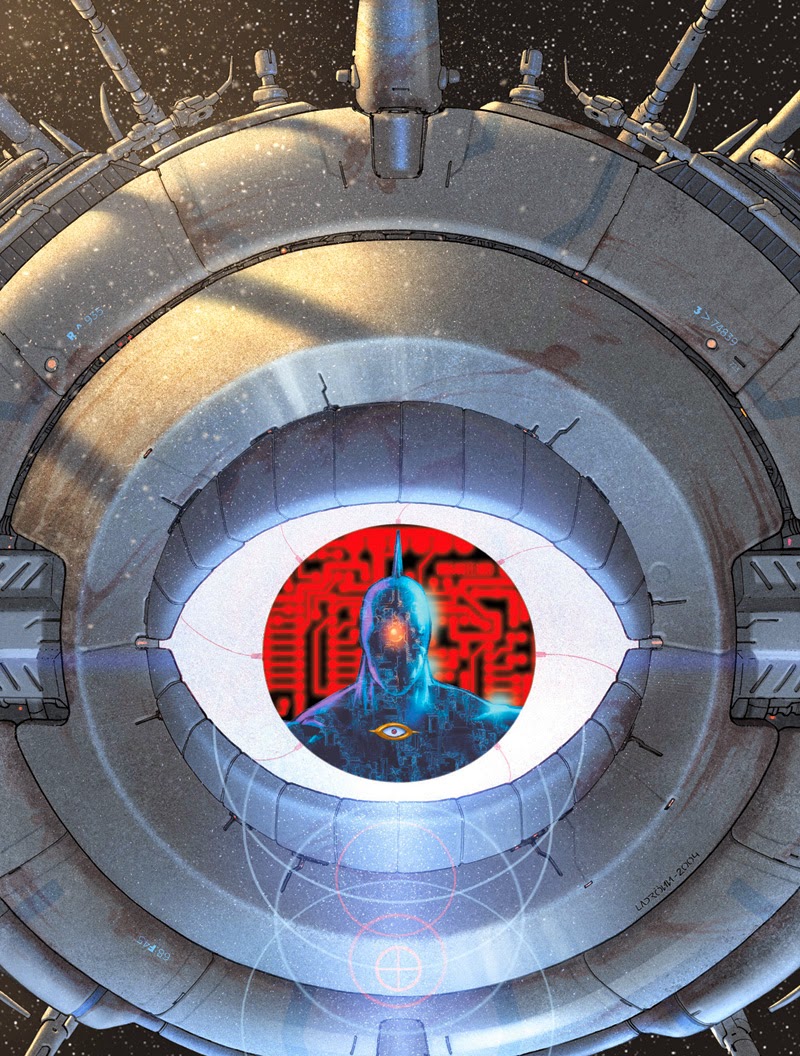 In some versions of continuity, Batman created the satellite to keep watch over other superheroes in case they went rogue or became threats. This satellite was turned against him of course in the Final Crisis. So while OMAC began as a near future hero by Kirby, most folks of this generation might think of him as an anti-hero/villain. And that goes for Brother Eye as well. Here, on "Arrow," Brother Eye is more a codename for the cyber-terrorist threatening the city.

Felicity's discovery that the virus Brother Eye is using to attack Starling is one she herself wrote back in college is the thrust of the previews for the episode, so it's not really as much of a shock as it should be, but it still packs quite a wallop. I have to learn to stop watching previews. You too. Ignore the video at the end of this review.

When the roommate's name is revealed as Myron Forest (in the comics, one of Brother Eye's creators), we really know who's behind what. Or do we? He claims innocence, and apparently Felicity's boyfriend is dead. But let's face it, the dead boyfriend is always the last one you expect. Holy red herring, Batman, Lifetime this ain't. But really, what kind of NSA super hacker could this doofus really be if he thinks Felicity is just a corporate lackey? I mean, let's face it, Team Arrow isn't the world's biggest secret. He couldn't figure that one out? 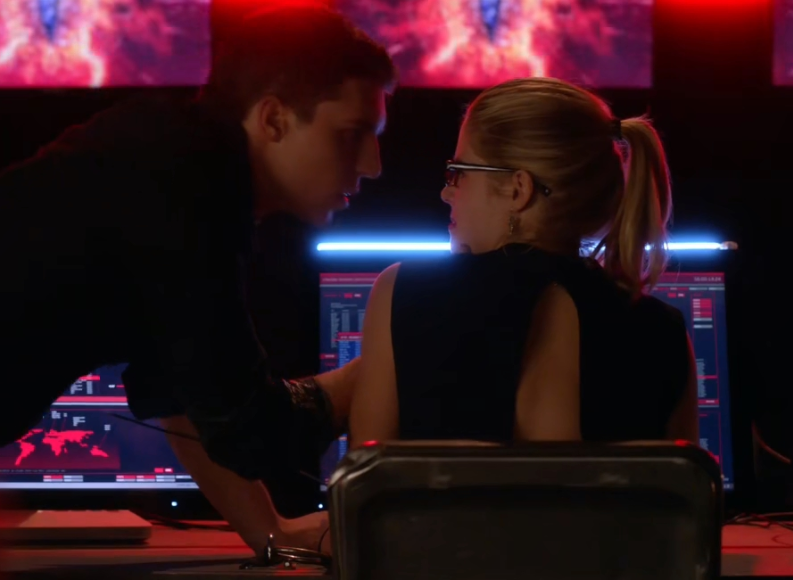 Felicity is not having a good day. She and her mom aren't the best of friends, but it all comes together in the end. Speaking of soap opera content, Laurel and her dad are just as much at odds as Felicity and her mom. Thea and Oliver are trying to get along, despite her taking Malcolm's money.

The Arrowcave question I posed last time reared its ugly head. How long will Thea put up with a locked door in her nightclub, 'flooded basement' or not? There was also another Coast City name drop. And did everyone else love the Adventures of Robin Hood movie poster at Felicity's place? 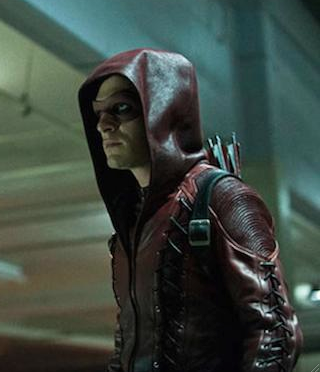 There was an awesome end fight, beginning to drop into a Batman '66 pattern, where we know at twenty of the hour there will be a fight. I loved Arrow misdirecting the motion guns. Diggle definitely needs a better battle suit. And Roy's arrow through the bazooka was so good even he didn't believe it.

Now let's talk about that ending. Roy is dreaming he killed Sara? It does fit in that Sara seemed to know her killer. And he's throwing the arrows? Can he do that without the Mirakuru in his system? Maybe it's not out? Or maybe, just maybe, it's just a dream. Having already faced T.O. Morrow, Solomon Grundy, and Brother Eye - would an appearance by Doctor Destiny be that much of a stretch really?