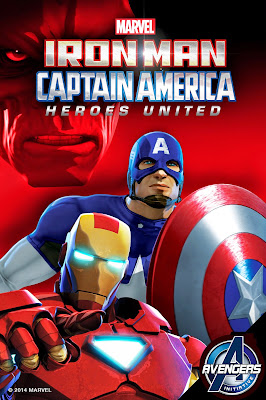 Picking up where Marvel's Iron Man & Hulk: Heroes United left off, this adventure sees the Red Skull sending the slightly and unnecessarily redesigned Taskmaster after Captain America and Iron Man. And whereas in the earlier feature I disliked the blocky computer animation, it is much improved and smoother in this feature. The Red Skull is downright terrifying here. Although some of the lip movements are just a few steps above "Clutch Cargo."

Again I also like the opening credits sequence. It's very basic, and with nice design. I wouldn't mind seeing maybe a short done in this style. I couldn't help wondering however if these graphics didn't possibly give away the entire plot of the feature however. And I wish the hordes of Hydra had had their green comics uniforms seen here rather than the generic stormtrooper armor and lame costumes that even Janet Van Dyne would reject that they wear throughout the feature. Boo hiss. 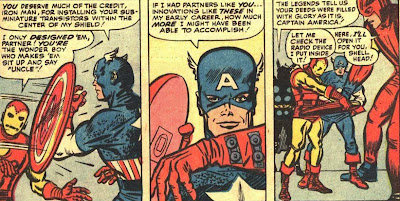 We sadly open on the same old same old. Iron Man and Captain America are training and beating that same old dead horse discussion of tech vs skill. I just some of these under thirty writers would read a comic book earlier than Civil War or Brian Michael Bendis' Avengers. Take a peek at some Silver Age Tales of Suspense or Bronze Age Avengers and you'll find that these two friends and teammates (yeah, they're not rivals) have had much more to talk about. I'm just asking for a little research, sheesh. 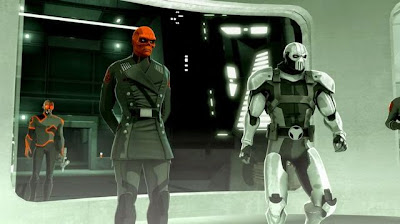 The battle between Captain America and Taskmaster on the helicarrier (again, somebody please explain to me how Stark has his own helicarrier, especially with SHIELD markings, even if it barely looks like a helicarrier) is quite good. I liked how Taskmaster cleverly won and I also liked the Iron Fist name drop. I would've appreciated the same for the Swordsman or the Black Knight to explain Taskmaster's sword skills though. 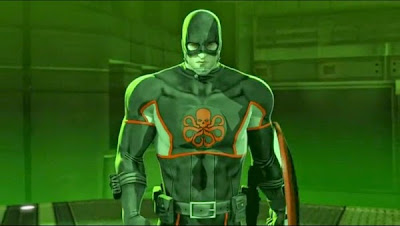 The bad guys' plans involve taking Captain America's blood to synthesize a new super soldier formula and build a superhuman Hydra army for the Red Skull, and swiping Iron Man's stealth armor for Taskmaster. The first the same old boring stuff, but the latter is intriguing and thought provoking. The old adage of 'no honor among thieves' does add a bit of predictability to the situation however.

The fight between Iron Man and the transformed Captain Hydra is pretty cool, especially when you know what's really up. The fight against the mutated super soldier troops was kinda odd and uneven. They looked like a cross between the Hulk and the Juggernaut, yet they moved like Boris Karloff's Mummy. Good thing the good guys had help. Still, I did enjoy this feature more than I anticipated I would. 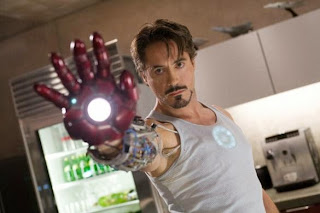 Adrian Pasdar, from his "Avengers Assemble," the Japanese anime series, and these features, is pretty much becoming the voice of Tony Stark and Iron Man. He's also a pretty good actor. I wonder if he's been considered for the film franchise when Robert Downey Jr. gets too old to play the armored Avenger? I think he'd be just fine. And speaking of the Avengers, I wouldn't mind seeing an Avengers feature like this, how about it?