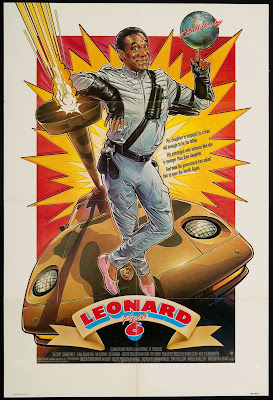 Leonard Part 6 ~ For those who weren't around, it's difficult to explain what a gigantic television phenomenon "The Cosby Show" was back in its day. It was such a ratings blockbuster for NBC that the other networks either programmed around it, or counter-programmed. CBS started "The Flash" (the 90s version) at 8:30 after "Cosby." Fledgling Fox went head to head, moving "The Simpsons" to Thursday nights and adding Michael Jackson whenever possible. For a time "Cosby" was unbeatable.

Bill Cosby chose this time to go back into the movies. The problem was that his popular TV series was derived mostly his then-new family style stand-up, as seen in Himself, but his comeback to film, Leonard Part 6 was more old school Bill Cosby. At least a decade out of date and mocking what the mainstream loved, this action adventure comedy tanked big time. 1971 audiences would have loved Leonard Part 6. 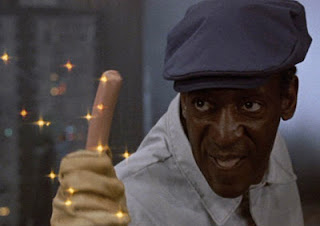 The 'part 6' of the title is explained away by our narrator, the titular Leonard Parker's butler, who says his retired secret agent boss' first five adventures had been confiscated because of national security. He's pulled back into action to stop a madwoman who can control the world's animals. Yeah, it's Ace Ventura without the laughs.

Watching Leonard Part 6 again after many many years, I had to wonder, pitifully, if a laugh track might have helped at all. Some of it is amusing in a Naked Gun or Pink Panther way, some of the situations might be funny on a skit show, but the fact is its a movie and it goes on and on. Saddest of all is Cosby himself who seems to sleepwalk through this mess with all the energy of the Boris Karloff Mummy. As someone who grew up on the man's comedy records, this was heartbreaking. 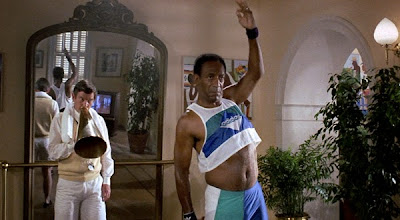 Leonard Part 6 would make an excellent double bill with Hudson Hawk, or maybe as a lead-in to the inexplicably entertaining and successful True Lies. They are all essentially the same type of flick. Only seek out as a curiosity, otherwise avoid this.