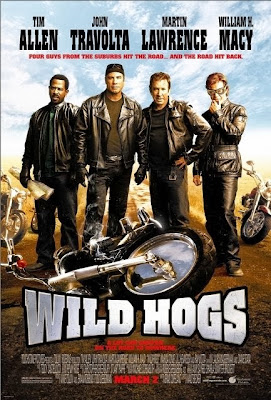 Wild Hogs ~ Sometimes it's surprising what you'll watch when there's nothing else to watch or you have nothing better to do. I had the unfortunate circumstance of having already seen most of what was available to view in the theater and OnDemand while on our recent Disney Cruise. And that's what brought me to Wild Hogs.

This movie, from start to finish, is like a cry for help, no, not help, a serious cry of desperation. Four actors, ahem, I mean, men, having their mid-life crises and turning to their motorcycle hobby for comfort and excitement. Tim Allen, John Travolta, Martin Lawrence, and William H. Macy star in this badly written, painfully performed, ultimately unsatisfying flick.

Its script and premise might've worked for a sixties Jack Lemmon or Jerry Lewis farce, but audiences and acting is more sophisticated now. I really had to wonder who this movie was for. Ten year-olds? I know ten year-olds this might be too simple for, even some of the gags don't make sense. 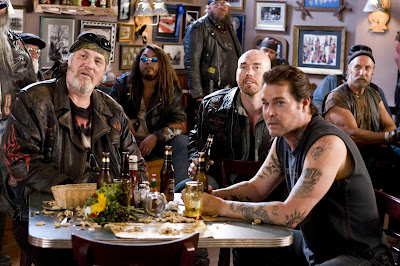 Well, hopefully those who phoned it in (I'm looking at you, William and Martin, you should be ashamed of yourselves) got paid well enough to pay their rent, and Tim and John had time to trade hairpiece care secrets. It's almost as if they are acting at each other the lack of chemistry is so bad. Ray Liotta and Marisa Tomei are similarly wasted here.

If you're ever itching to forget that Macy and Travolta have been nominated for Oscars, this is the flick for you. Wow, what a bad movie.