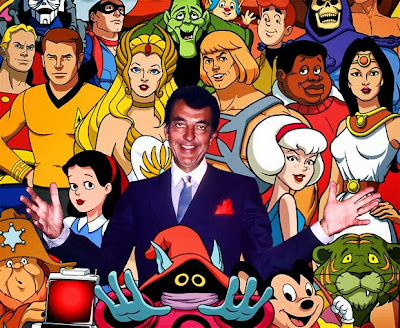 Lou Scheimer, the father of Filmation, and the king of American television animation for many of our childhoods, has passed away at the age of 84.

Filmation was a small animation studio, one of the few still doing animation in the United States, rather than shipping it overseas. Founded by Scheimer, Hal Sutherland, and Norm Prescott in 1962, they did some little known cartoons like "Rod Rocket." They really caught fire when they licensed the DC Comics characters in 1966.

Beginning with "The New Adventures of Superman," they began to expand to shorts that featured other characters like Superboy, Aquaman, Batman and Robin, and later the Justice League of America and the Teen Titans, as well as those groups' individual members. These cartoons were, along with the 1966 "Batman" TV series on ABC, my gateway drug into comic books. My love of Aquaman, Superboy, and others sprang from early viewings.

The DC deal brought another comics company to Filmation's offices, and Archie came to Saturday morning animation for years under their guidance. Later in the 1970s, Filmation became a major player in the animation game, producing cartoons of "The Brady Kids," "Fat Albert and the Cosby Kids," and "Star Trek: The Animated Series" among many others.

Filmation delved into live-action with shows like "Isis," "Space Academy" and Shazam." While the studio began to get a reputation for repeating backgrounds, limited animation, recycling designs, rapid jump cuts, and using the same music over again, they had also produced some real quality programming as well.

In the 1980s Filmation produced some of its most well known shows like "He-Man and the Masters of the Universe," which featured, like many of the previous shows, a lesson at the end of every episode. Before closing up shop in 1989, Filmation also produced over the years some very cool versions of Flash Gordon, Tarzan, and the Lone Ranger, using then fairly new rotoscoping techniques.

With the loss of Lou Scheimer on Friday, we have lost one the legends of animation, and for me, a big chunk of my childhood. He'll be missed.