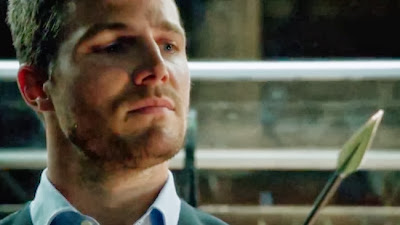 We begin, as always, on the island, but much like how things are on Joss Whedon's "Marvel's Agents of S.H.I.E.L.D.," nothing is what it seems. This isn't a flashback, this is the present day. Oliver is on the island, yes, but Diggle and Felicity are coming to find him.

Some time has passed since last season. Well, obviously. Oliver ran away after failing Starling City and losing his best friend. His mom is now in prison, Iron Heights, and Queen Consolidated is ripe for hostile takeover by a company called Stellmoor International. So Diggle and Felicity have come to bring our hero home. 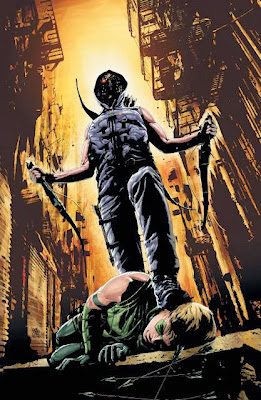 It's worth noting that in the comics, the New 52 continuity specifically, Stellmoor International does in fact buy out Queen Industries. CEO Simon Lacroix, an enemy of Robert Queen, Oliver's father, is also the super-villain called Komodo, one of Green Arrow's rogues gallery. Notably in the comics, the evil archer known as Komodo also killed Robert Queen.

Speaking of comics parallels, there's an opening for mayor of the city, a position Oliver Queen has held, and there's a church and a guy named Blood in the Glades… it couldn't be Brother Blood, and the Church of Blood, could it?

There are also more than a few name drops of Central City. I guess they are already prepping for the Flash two-parter in December and planned spin-off. Speaking of masked vigilantes, in the wake of the destruction of the Glades and the missing Hood, it seems others have taken up the slack. Roy Harper is one, a gang called the Hoods are others. 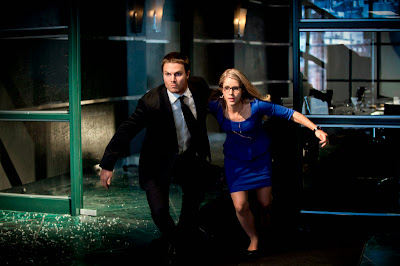 Genre and fan favorite Summer Glau plays Isobel Rochev, head of acquisitions for Stellmoor. As much as I like her, she's unconvincing here, but I guess we'll be seeing more of her. The returning cast is excellent as always, more comfortable in their roles, Emily Bett Rickards continues to be my breakout favorite, and Stephen Amell's bare chest should still get its own credit.

"City of Heroes" is a very angsty episode. Thea won't visit her mom in prison. Laurel won't get back with Oliver because of Tommy. Oliver won't become the Hood again. That last one is because of guilt, and Tommy's calling him a murderer. It's so good that they are finally facing up to that factor of this version of Green Arrow. I don't like my heroes to be serial killers. This is a good thing.

Speaking of good things, the best part of the episode is in the last five minutes. It's not just Oliver deciding on a new name for his non-vigilante hero identity. While Roy is out amateur vigilant-ing, he gets in over his head and is saved by a masked blonde in black leather. Could this be... the Black Canary?

Tune in next week, same Arrow time, same Arrow channel... for the return of China White, and rumor has it… the Bronze Tiger!