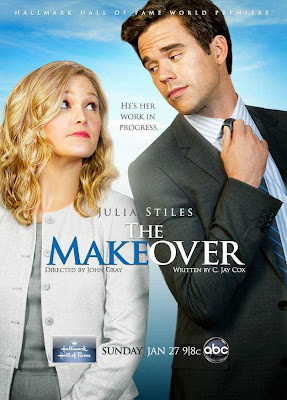 The Makeover ~ The mother-in-law tried to watch this one twice OnDemand while we were on the Disney Cruise. She fell asleep both times. Lucky me, I got to watch it twice. The flick isn't bad, but let's be honest, this romcom isn't something I would normally pick to watch myself, and especially wouldn't pick to watch twice.

What we're looking at is basically the Pygmalion story, and they even self-reference it in the movie. Julia Stiles, who I normally like, loses an election for being too cold and logical. She meets David Walton, just filled with warmth and Boston-y goodness, and tries to turn him into a full package political candidate. The story pretty much writes itself from there.

The Makeover is relatively harmless (unless of course you can't stand Boston accents, and if you can't, strap in, it's going to be a rough one), fairly predictable. Everyone involved does an adequate job, gets the check, and pays the rent, but I don't think they brag about it. Good if there's nothing else on.