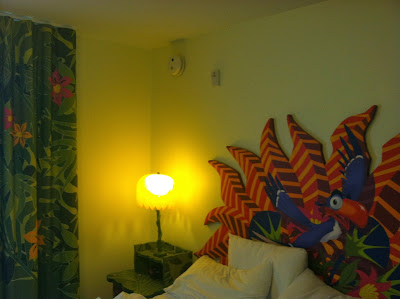 Our recent vacation included a short stay at the newest resort in Walt Disney World - Art of Animation. Originally it was to be called Legendary Years, a sister resort to Pop Century. As Pop Century was a tribute to the decades of the last half of the twentieth century, Legendary Years would cover the first half, 1900-1950. After 9-11 however, for whatever reason, construction halted for several years.

If you like to see a video of what it looked like during those non-construction years, my friend John Corigliano, of the Your Ear to the World podcast, did a walk-through with his camera. You can see that here. Thankfully construction started again, but with a new objective and name, Art of Animation, with each building dedicated to a different recent animated feature. 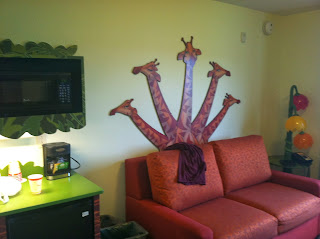 The family suites are in the Lion King, Cars, and Finding Nemo buildings, with the single suites in the Little Mermaid buildings. For our time at Art of Animation, we stayed in the Lion King suites, the buildings being surrounded by giant statues of the various characters and scenes from the movie. Outside of our building was Pride Rock, the Elephant Graveyard, the "Hakuna Matata" log, and Rafiki's home, with giant statues of all the favorites in and around. It was something.

Our suite rocked. Not only was it fairly big, almost colossal compared to our cabin on board the Disney Fantasy, the room was literally bursting with iconic Lion King jungle décor. The carpeting, the bedspreads, the furniture - it was all jungle themed. The TVs were large flat screens with an electronics deck under them to both recharge your phones and other devices, but you could also hook up your video equipment to watch on the big screen. 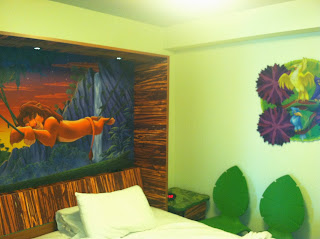 Our dining room table collapsed into the extra Murphy bed for a fun twist, and came with stackable chairs. The suite even had a small, but almost complete kitchen. The bathroom even got into the act, with a cavernous shower stall in a beautiful orange sunset as shown in the movie. This came complete with orange smelling soap and shampoo. What a terrific extra accent! This was a great suite, right down to the bathroom. And in the hotel itself, even the elevators were jungle-like in motif and temperature, almost lush. 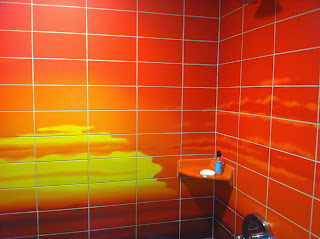 The doors were unlocked by our Magic Bands, which also allowed us access to the parks, and we could purchase items in the hotel and in the parks as well with them, including FastPasses. The lobby, staffed by the usual wonderful customer service folks, is decorated by animation sketches from the films featured there, from original ideas to final products, almost like evolutionary stages. 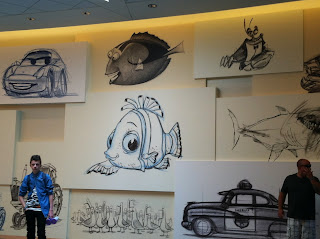 The food court, Landscape of Flavors, is reputed so good that folks from Pop Century will walk over to have breakfast, lunch, and dinner there. Some of it was okay, and some really good. I'll be talking about some of their offerings over at French Fry Diary in the near future, so keep an eye out.

Also, if you'd like a more personal look at Disney's Art of Animation Resort, The Bride and I talk about it on the newest episode of our new Make Mine Magic Podcast. You can hear it here. Check it out.