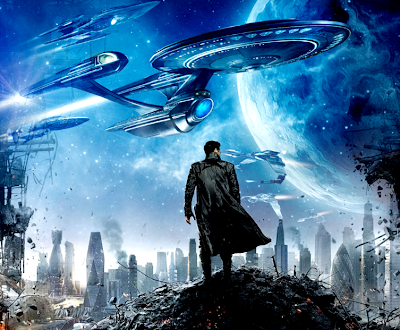 Star Trek Into Darkness ~ There was so much hype about is-it-Khan-or-isn't-it that I think it really overshadowed what a great film this truly is. Maybe if J.J. Abrams hadn't kept it such a big secret, and just not made a big deal about it, maybe the reception would have been different. Sure this sequel did well, and there will be a third, but I think it could have done better. I mean, seriously, if it came out that this was going to be a remake of Star Trek II: The Wrath of Khan, different or exactly the same, couldn't that have only helped box office sales? 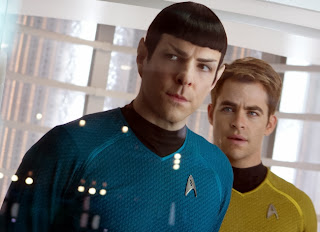 Yes, the circumstances are different, and yes, things play out very Bizarro World in some places, but that doesn't make it a bad movie. I think it's cool. Abrams did a wonderful thing with the first movie. He found a way for old fans and new fans of Trek to get the best of both worlds. There's a new continuity without jettisoning the old one, can it get much better than that? New and old fans get a new Khan story, and old fans get to see a parallel universe to the one they know. This is a good thing.

I liked the parallels. I like the new and known dynamics of the Kirk/Spock relationship, and well all the other character relationships. While I do yearn for a seasoned Kirk who knows what to do, I like this young guy too. All the characters get good screen time, the actors give great performances, and the villain(s) do as well. Benedict Cumberbatch is both a compelling actor, but a very compelling villain as well. His casting was golden. He's no Ricardo Montelban, but he is Khan. 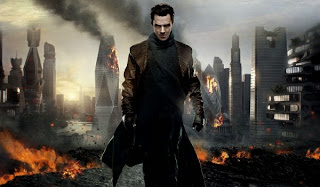 The other thing I loved is probably something that the old Trekkies and Trekkers hate. I loved the action. It never stops. Star Trek Into Darkness is a fast rollercoaster ride of an action movie. This is not your grandfather's Star Trek where they talk their enemies to death, this is, again, the best of both worlds. I should note that the story has some problems, both in logic and in flow, but you don't have time to think about it until after it's over. 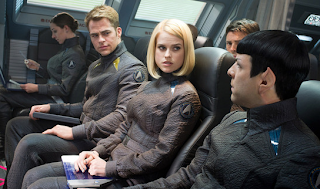 And many folks I know had a problem with what seems at first a cop out in the story. That would be young Spock confronting old Spock on a situation he had already encountered. Hello? If your alternate universe future self were readily available for you to access his experience, wouldn’t the logical thing be to consult him, and consult him as much as possible? Eat Vulcan logic, Trekkies.

Visually stunning, wonderfully written, directed, and acted, this is one hell of a movie. I will grant you, this isn't as good as the first one, but it continues the story suitably and respectfully. Maybe for the new Trek series, the odd-numbered sequels are the good ones.