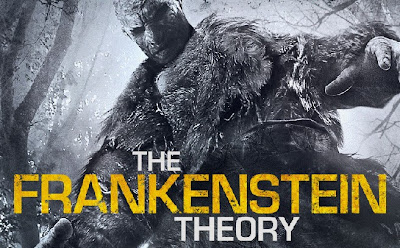 The Frankenstein Theory ~ Shot similarly to The Blair Witch Project, a documentary crew follows the obsessed Professor John Venkenheim to the Arctic where he intends to prove that Frankenstein was not only true, but about his ancestor, and to vindicate his reputation once and for all. He believes he can find the Frankenstein monster.

This is a fascinating concept, and the film moves between actual movie and shaky cam documentary style well. Writer/director Andrew Weiner's background is in Troma and low budget horror, but this is a step above. I liked it.

Kris Lemche plays Venkenheim with perfect obsessive creepiness, but just enough compassion that you care about him. It's just this side of pity, but you do care for the buggy little fella. Joe Egender does him one better as the antsy paranoid meth-head and witness to the monster's present day shenanigans. Tiny role, but camera crewman Brian Henderson made me laugh doing a funnier Dane Cook than Dane Cook. Timothy V. Murphy playing the wilderness guide who channels Robert Shaw in Jaws wonderfully is pretty entertaining too. I absolutely love him and his campfire story. Beautiful.

Granted, the film does fall apart a bit toward the last act, but there are enough good parts here to push it above say, Sharknado. I really kinda dug it, recommended for horror fans.