Daredevil S01 E11: The Path of the Righteous 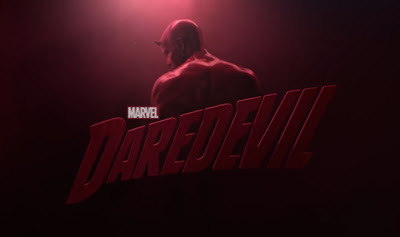 As Matt continues to recover from his battle with Nobu, and Fisk worries over the poisoned Vanessa at the hospital, we have what seems to be a waiting game. Rather than the one-minute break between boxing rounds, it seems we're getting two or three episodes. I want to see our opponents back in the ring, don't you? Enough foreplay!

Who poisoned the guests at Fisk's benefit? The signs point to Nobu's clan, but didn't Madame Gao say they would have their hands full with other matters? Owsley didn't seem to know at first the drinks were poisoned but caught on quickly, so I'm pretty sure it wasn't him. That pretty much leaves Gao to blame... or Wesley.

Fisk's right hand man has very recently been sidelined by Fisk when dealing with Gao and Vanessa. This would not be the first time I've questioned the exact personal nature of Fisk and Wesley's relationship. Is there more to it than business? Is it perhaps more twisted like that of Mr. Burns and Waylon Smithers on "The Simpsons"? Could this mass poisoning be both an act of sabotage and that of a jealous lover? 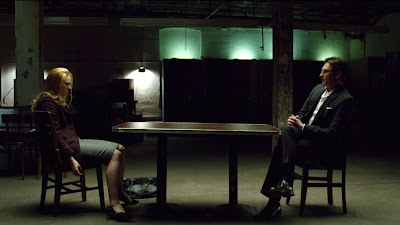 However we may never know. When Wesley gets wind of Karen snooping around Fisk's supposedly dead mother, he decides to take matters into his own hands. At first it seems he's going to kill Karen, then he offers her a job, which was puzzling. Why does he refer to Fisk as no longer his employer? What is going on here? Sadly this is Toby Leonard Moore's weakest work so far, and it's his last. I guess he's better in small doses. And what did Karen mean about this not being the first time she's shot someone? 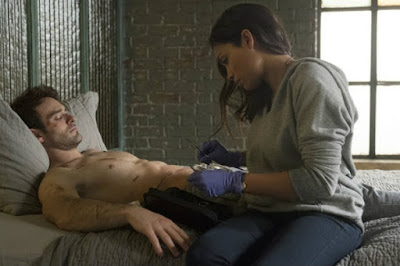 I was happy to actually see Rosario Dawson return as the Claire Temple/Night Nurse hybrid character. I honestly felt cheated last episode when appeared only off-screen in a casual mention. Here unfortunately she is just more foreplay, preluding Matt's further discussion with Father Lantom who implies that sometimes the devil is a good thing, a lesson, a symbol, an inspiration to others. 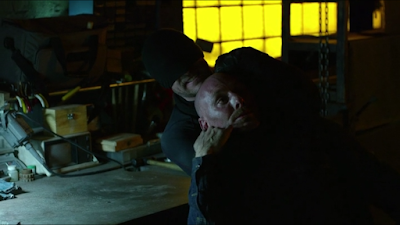 If nothing else, these pep talks knock some sense into Matt, and he gets back into gear and seeks out everybody's favorite snitch, Turk Barrett. This time however, Daredevil isn't looking for Fisk, instead he wants something sensible - body armor. It would seem that the beating he took from Nobu and Kingpin did knock some sense into him. Turk sends our hero to the workshop of Melvin Potter. 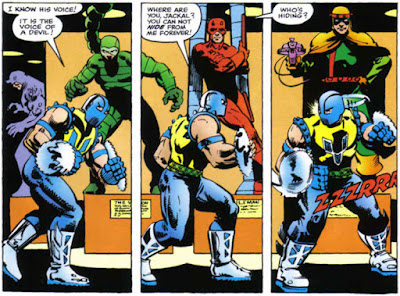 Just in case you need a reminder of who Melvin Potter is, his Gladiator chest symbol is on the wall of his shop as Daredevil breaks and enters. As before, the simple armorer gives our hero quite a pounding. Nerdgasm when Potter threw a circular saw blade at DD. Again, enough foreplay, I want to see a full-on full-comic-dress fight between Daredevil and Gladiator. Did anyone else notice the Stilt-Man armor was missing since last we saw the workshop?

If nothing else, I suspect we'll finally be getting the traditional red Daredevil costume from the comics next episode. This was a slow one, highlighted by Night Nurse and Gladiator, with hopes of better coming.