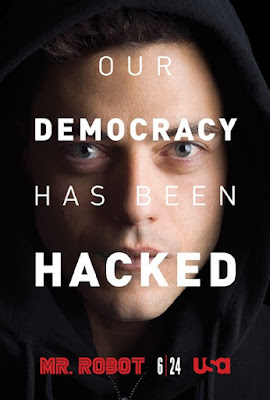 Awkward cynical cyber-security techie Elliot Rodger is also a vigilante hacker by night. Played by former child actor Rami Malek (Night at the Museums) with dreary neo-gothic hipster non-glee, he obsesses on finding the deets on anyone he has to interact with socially to make it easier, but it never does. He's creepy at first, but his mad first person narrative wins viewers over quickly.

If you think Elliot Rodger is an anarchist or nihilist wannabe with an odd sense of justice, it's only because you haven't met Christian Slater's character yet. Mr. Robot is the real anarchist and he wants to bring down the evil corporations, especially the one Elliot works for - E Corp. There's a very paranoid Big Brother vibe, and Slater is very Slater, but it works. 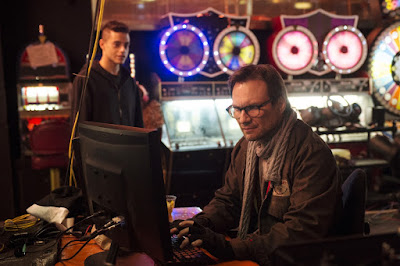 The pilot episode, cleverly titled "eps1.0_hellofriend.mov," was written by show creator and executive producer Sam Esmail, whose previous credits include Comet and dating Emmy Rossum from "Shameless." It's a single camera shoot interspersed with lots of stock footage and a tense score by Mac Quayle that is vaguely reminiscent of Tangerine Dream on speed.

If nothing else, this is a tale told with an intriguing storytelling style. Worth checking out. Available on several digital platforms and OnDemand right now, "Mr. Robot" officially premieres on USA June 24th.