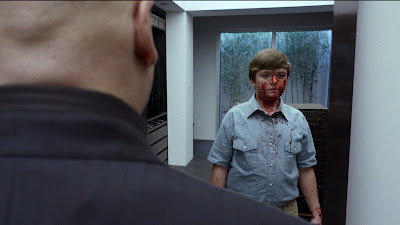 After a brief interlude with Stick and the seeming world of powers last time, episode eight welcomes us back to reality with the Kingpin. In a beautifully crafted sequence written by executive producer Steven S. DeKnight and directed by Stephen Surjik, the latter known for his work on "Burn Notice" and "Person of Interest," we watch Vincent D'Onofrio's Wilson Fisk in his morning routine. He awakens to the painting purchased in "Rabbit in a Snowstorm," makes breakfast, gets dressed, but still sees himself as an abused child in the mirror. No dialogue, but wonderfully shot, and so telling of his character, without a word spoken. I'll say it again. Beautiful. 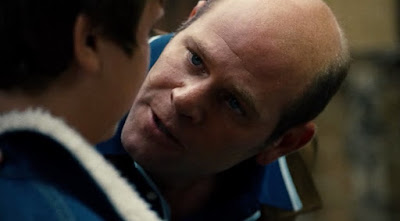 We are introduced to young Wilson Fisk's New York via a wonderful sound-sculpture by the Rolling Stones' "Brown Sugar." I felt the time and the place. We meet the boy's family and see how he lived. Fisk's father, a failed politician, is played by "The Wire" veteran Domenick Lombardozzi, and there is another mention of Don Rigoletto, the Mafia boss who was replaced as a power broker by the Kingpin. In the comics, young Fisk was his bodyguard and eventually killed him. At some point in this series, someone, I forget who, remarks that Rigoletto retired, in pieces. The flashbacks to Fisk's past are a rich tapestry of old New York, and a tribute to DeKnight's filmmaking skills. 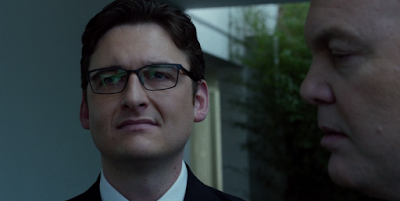 In the present as Matt is brought into Foggy and Karen fight against Union, Fisk is having difficulty controlling Nobu and The Hand. If we're all being honest here, since he started romancing Vanessa, Fisk has been having trouble keeping all of his legion of doom under control. This is a weak alliance at best, only held together by a strong leader. James Wesley wonders why Fisk even needs the Japanese after last episode. The casualness between Fisk and Wesley here is warm, unexpected, and disconcerting. What is their real relationship? Is it more than business? 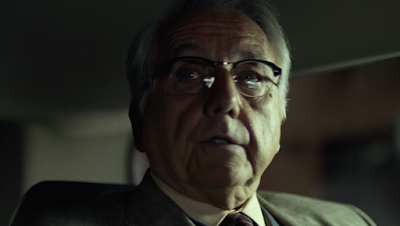 The villains are on the move in this secret origin of the Kingpin episode. Madame Gao comes to Fisk with a warning about keeping control. The villains are restless, but who is she? Just a guess, but could she be some Iron Fist adversary that will carry to his series later next year? As long as we're speculating about the villains, I'm going to throw this out there. Perhaps Bob Gunton's Leland Owlsley is not the Owl as I have suggested. He keeps talking about his son, also named Leland. If he keeps acting the way he's acting, perhaps old Leland won't make it out of this alive, and young Leland returns for revenge, as The Owl. 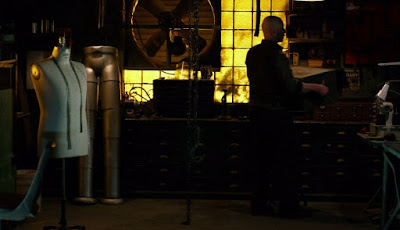 Speaking of villains, we run across one (or one and a half) classic Daredevil foes from the hero's rogues gallery. Henching for Fisk, Melvin Potter has also created body armor for his boss, but as he fights Daredevil we get to see his wonderful workshop that includes not only the Gladiator armor, but the Stilt-Man suit as well. Comics fans know that Potter is the villain called Gladiator, a particularly nasty baddie with circular saw blades on his wrists, but in his civilian identity, a mild and special soul. I am psyched, hoping to see both of these villains before the series is out. Like Skylar Gaertner as young Matt in the last episode, Cole Jenson as young Wilson Fisk is an amazing actor. He is the embodiment and verbalization of everything Vincent D'Onofrio demonstrates with gesture, facial expression, and silence. Truly a case of an inner child, and that is what the actor's portrayal has been all about. And now we know what the painting is all about. The wall of punishment, and we see what happened to Daddy Fisk. It's not pretty, it's not happy, but maybe, it's just. Now we'll have to see the rest of the story, how momma's boy became violent man-child.

There is an interesting parallel struck between the childhoods of Matt Murdock and Wilson Fisk. Both men have violent fathers who have lasting effects on them as adults, but it's the way the violence is channeled and the lessons taught and learned that separate them. Still, in many ways, at least on the surface and in the big picture, they are the same. They both think they want to save the city, they both think they have to do it to redeem something their fathers failed at, and they are both very violent men. 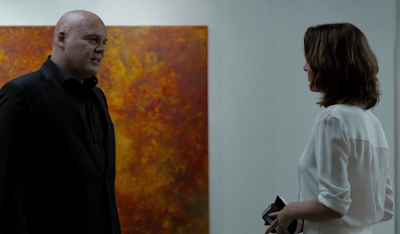 Back in the present, Vanessa comes and is his support, his inspiration and his motivation. She becomes the mother to D'Onofrio's childlike Kingpin, and guides him to do what he needs to do - reveal himself, and go public... before Daredevil does. Our hero goes to Ben Urich too late. Yes, he's made an ally, but he's far too late. Daredevil has hit his own wall.

So many folks, following along with me as I review these episodes one at a time as I watch them, have pointed out "Stick" as their favorite of the bunch. I am going to have to buck the majority. "Shadows in the Glass," more the Kingpin's secret origin, is my favorite so far.