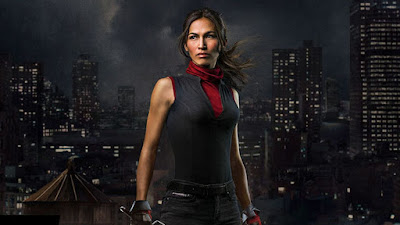 At the end of the last episode of "Daredevil," the Punisher had been apprehended and Elektra had made her first appearance, however momentary, in the series. Like it or not, we probably haven't seen the last of either of them.

Now as one of the few people on Earth who actually liked the 2003 movie and Jennifer Garner as Elektra (heck, comics continuity aside, I even thought her solo film was kinda fun in a wacky way), I have to confess, that much like the Punisher, I don't like the comics character. 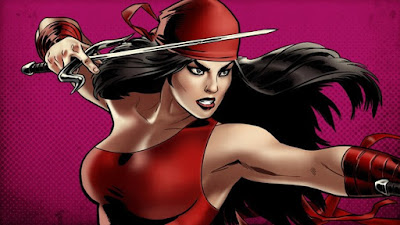 In my opinion Frank Miller's work at both DC Comics with The Dark Knight Returns, and at Marvel Comics with Daredevil and the Elektra saga brought on a dark age of grim and gritty violence that comics still haven't recovered from. I respect the genius of the work itself, but the bleed over into the rest of the industry is simply tragic. This type of garbage still resonates, not just in the comics, but the films based on those characters as well. Superman should not be grim and gritty, case in point: Man of Steel and Batman v Superman: Dawn of Justice. Seriously, wtf? So there's that, I'm not a fan of Elektra. 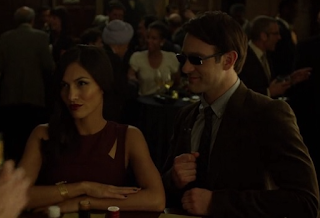 "Kinbaku" opens ten years ago as Matt and Foggy try to crash a high class party. When Elektra catches Matt's attention and saves him from being ejected from the party, it is a beautifully framed moment, with bracelets clacking and sound vibrating from fingers on wine glass rim. Props go to Floria Sigismondi, a photographer and music video director, perhaps best known for The Runaways, who directed this episode.

After the title sequence however we are jolted back to reality, and the present, with Elektra's comment that Matt's German beer tastes like piss. Quite a contrast. Elektra Natchios is played by Elodie Yung, whose willowy body and proper British accent take a moment to get used to in the role. 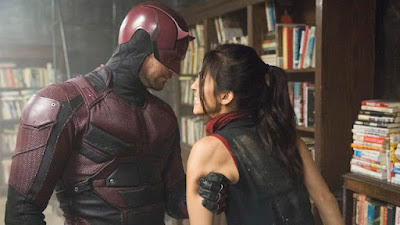 Elektra is back in town for Matt's legal help, and perhaps to rekindle their old romance. Matt is having none of it, even when she goes into an extended exposition on the Roxxon Corporation. She has a business meeting with them and wants his expertise. She makes it seem innocent but also seems game for playtime as well. Matt gives the impression that their time together was a mistake he doesn't want to step in again. All things considered, she's exactly the kind of personality who would make s good assassin. 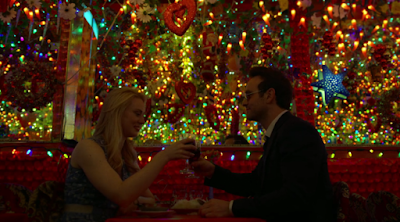 Back at work, the subplot ruse of Matt being an alcoholic to explain his disappearances is getting old. Speaking of old, Karen seems to be still obsessed with the Punisher, the authorities are keeping things covered up about him. Reyes wants all of the firm's files on the Punisher. And then there's that kiss between Karen and Matt. Oh, the webs we weave.

I loved the Indian restaurant where Matt and Karen's date eventually ends up. So cool with all the neon chili peppers, I'd like to eat there. It's just too bad that the date is colored by both Karen's obsession with the Punisher and Matt's obsession with Elektra. Any goodness there could be is ruined by subtext. As in the comics, I think this relationship is surely doomed before it even begins. 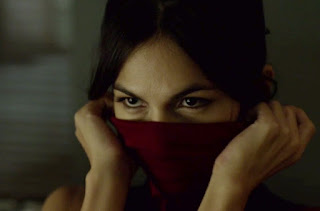 The story jumps back and forth between the decade ago flashback and now, telling the tale of Matt and Elektra. The fight/sex scene in the boxing ring after Elektra suspects Matt isn't blind is so well done, cray-cray, and reminiscent of the playground duel/foreplay scene in the 2003 movie. And of course as the episode goes on we learn what a dangerous sociopath she can be. 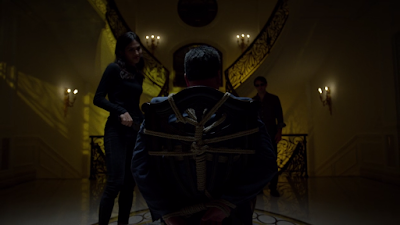 We see another date, this time in the home of Roscoe Sweeney, the man who long ago killed Matt's father. Perhaps it's time to discuss the title of the episode. Kinbaku is a particularly tight and nasty type of Japanese bondage. It's not only how Elektra binds Sweeney in the flashback, but the kind of grip she seems to have on Matt, tight and nasty. She still has that grip, as she has brought the Yakuza to her penthouse, and Matt there as well. She knows he's Daredevil, and wants to play.