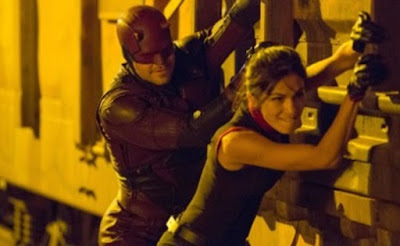 We open this episode of "Daredevil" in Quentin Tarantino style reminiscent of Kill Bill as motorcycled Yakuza drag through the streets on their way to take on Daredevil and Elektra to the sound of "Date with the Night" by the Yeah Yeah Yeahs. Cliche and apropos, but I loved it. Great opening. Too bad our 'heroes' make short work of them. The horrifying part is at the end where Elektra, clearly enjoying herself, wants to go out for a bite. 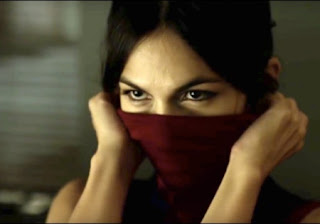 As we know from the last episode, Elektra is more than an adrenaline junkie, she's a sociopath. At the diner sucking down soda and inhaling French fries she matter of factly tells Matt she knows all about Daredevil and even though he wears a mask, "you can't mask that ass, I'd know it anywhere." Another secret identity out the window.

A deal is struck, no killing, and Daredevil will help Elektra with the Yakuza. And if you think that's an unholy alliance, things get more interesting when Nelson and Murdock decide to take DA Reyes on head to head. To keep the Punisher from getting the death penalty, they're going to defend him. I don't like the Punisher, but I like when this show surprises me, and this is one of those times. 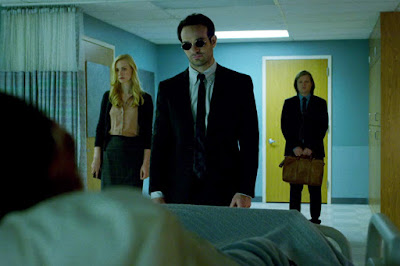 The Matt and Karen relationship is moving along wonderfully, as long as you remove the factors from the equation that ruin it all - the Punisher and Elektra. This dishonesty just flushes all the fun and sincerity of Matt and Karen's sweet innocence right down the toilet. It's like a magician doing tricks when you can see the wires and mirrors. Not fun, and not cool. 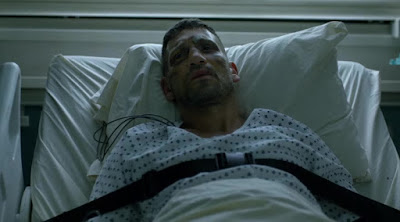 Karen is pulled deeper into the Punisher's past when he gives a hospital bed confession of his secret origin to her, and her alone. The fact that she knew about his family allows him to trust her. In this way, the Karen/Castle relationship is just a bit more pure than hers with Matt, and it's a shame. Still, even bound to a bed, Jon Bernthal shines in this role. 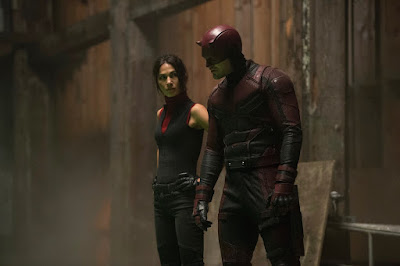 Meanwhile, Matt and Elektra attend a ritzy Roxxon/Yakuza party. The heist vibe is strong and it's interesting how Daredevil's powers are put to use in this situation. I'd like to see more of this. They get away with something called the Roxxon ledger while a pseudo-reveal is made that this isn't the Yakuza. The Hand, perhaps?

It gets worse. Though convinced to plead guilty, when he gets in front of the judge, Frank Castle pleads not guilty. That means it going to trial. Matt may have to choose between Elektra and the case now. A good episode, more linking than anything else, but good just the same.