Creature from the Black Lagoon in 3-D 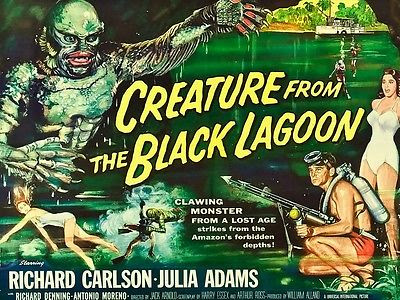 Creature from the Black Lagoon ~ One of the most awesome things about doing the TCM Classic Cruise is the surprises that pop up when you get on board and finally see the schedule (often the movies being shown are kept secret until the last moment). One such surprise was the showing of Creature from the Black Lagoon, not just on the big screen, but in the original 3-D as it was originally shown.

The last of the Universal monsters, the Gill Man only appeared in three films, two of them in 3-D. This original was directed by Jack Arnold, an old pro at the time with 1950s 3-D after his It Came from Outer Space (not to mention 2-D scifi horror classics like Tarantula and The Incredible Shrinking Man), and he brought the legend of the South American lizard man to life to round out the Universal monsters with one of its most memorable members. 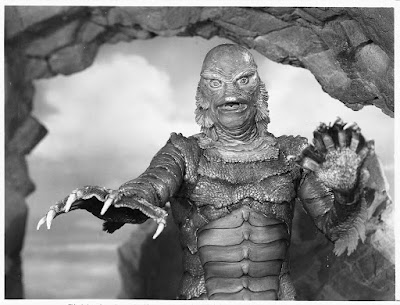 After finding fossils of a possible missing link, an expedition up the Amazon searches for the legendary Gill Man, and unfortunately he finds them. In the Black Lagoon, the Gill Man traps the team, picking them off one by one. It's good fun, with real scares, and the 3-D is rather impressive too. Not too much of the typical campy 'comin'-at-ya' stuff, but more like what's done today, adding depth etc. It's not perfect, but it's a lot better than I could have imagined. 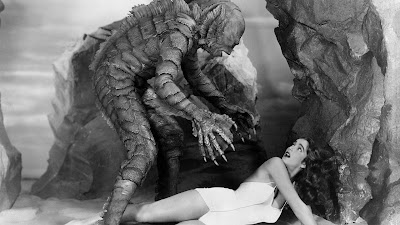 There are flaws, but unintentionally funny ones so they're forgivable. Every time the Creature is on screen, except for one scene, his blaring sinister theme plays. It got to be so much fun that we wandered the ship afterward, putting out our hands like claws and going dum-dum-daaah. Also after a while the pissing contest between Richard Denning and Richard Carlson over Julia Adams becomes absolutely ridiculous. And let's not get into what goes on over the bandaged body of one poor victim.

The journey of the Rita down to the Black Lagoon to hunt the Gill Man, and his subsequent hunt for them is classic horror, and so much more fun in 3-D and on the big screen. See it like that if you get the chance, and if not, still see it, it rocks. Recommended.