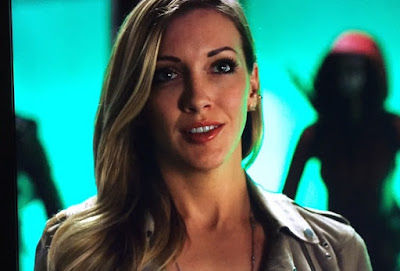 First off I should mention that "Arrow," as well as "The Flash," "Legends of Tomorrow," "Supergirl," and a few other CW shows have all been renewed early. Although such an early renewal is unusual, what is really intriguing is that "Arrow" had originally been conceived as a five-year project. I guess the future really is wide open, at least in the Arrowverse.

We open as we left before the mid-winter finale, with Laurel alive greeting Oliver in the Arrowcave. Trust me, he's as shocked and disbelieving as we are. Laurel claims that at the time of her death, Sara rescued her and healed her with the technology of the Waverider. At first Oliver accepts it, then Felicity comes in, and so does she. That said, she can't help but wonder why the Legends can save Laurel but not Malone. That old devil time travel. 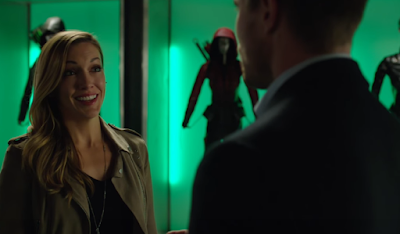 Considering however that there was no mention of these events in the previous night's episode of "DC's Legends of Tomorrow," I'm calling shenanigans. And if she's not Laurel, who is she? Prometheus? Laurel's 'resurrection party' is sparsely attended and the mood is a bit grim. Everyone is still upset by Artemis' betrayal, Prometheus still on the loose, and yes, Detective Malone's death at the hands of Green Arrow last episode. But of course, Felicity set the party up with only one intent - to get Laurel's DNA. Even if the rest of Team Arrow is drinking the Kool-Aid, Felicity is still in the job. 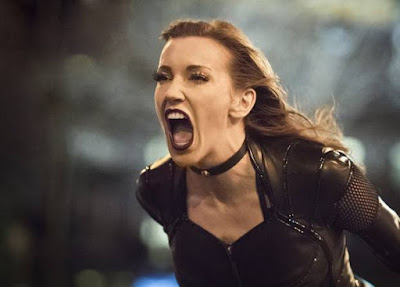 The DNA is a match. And just as Rory is joking with Felicity about evil twins, Felicity realizes that Laurel does have an evil twin. Before she can even mouth the words Black Siren, they're attacked by... guess who? The Black Siren. I love when comic book shows are comic booky. It just makes this fanboy right here squeee!

The Black Siren was freed from S.T.A.R. Labs by Prometheus. The video sent over by Cisco seems to indicate magic or teleportation as no alarms were triggered and they were in and out. But things aren't working out between Prometheus and the Black Siren. I guess Prometheus is not as cool a boss as Zoom. She arranges a meet at the Black Canary statue that goes awry, taking the statue with it. Broke my heart to see that.

Still Team Arrow apprehends her, and Oliver tries to interrogate her, to no avail. He can't separate her from her doppelgänger, and if can get redemption for his Laurel through her evil twin, he'll do it. Felicity however knows her ex's weaknesses and tries to compensate. Felicity hooks up the Siren unknowingly with tracking nanites and sets her free. Oliver is of course livid. In the meantime we get some nice interaction between Wild Dog and Mr. Terrific. Wish there was more of that. 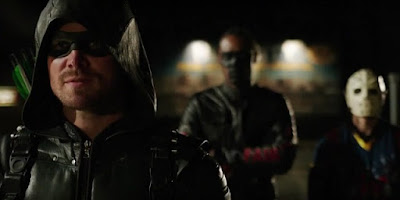 The nanites lead the team to both Prometheus and the Black Siren. It was great seeing Overwatch in the field, despite alternately being bait and a target. And of course Prometheus got away again, although I'm not sure how. He had a chance to kill Green Arrow but seemed to sneak out the back in the middle of the fight.

The Bratva flashback continues to drag on, only brightening up when Talia al Ghul shows up. I love Talia, but I'm sorry, folks, after Damian Darhk (who continues to haunt the Legends of Tomorrow), I am all League of Assassins-ed out.

Also Oliver goes to Adrian Chase to defend Diggle, but while there he learns that the DA knows Malone was killed by Green Arrow being manipulated into thinking he was Prometheus. Chase does intercede on Diggle's behalf only to find the military is set on eliminating Diggle. Chase cleverly saves him, if only temporarily.

The stinger at the end of the episode fades in from Oliver swearing he'll find a replacement for the Black Canary, someone worthy of the mantle. We see a woman take out two bikers in a bar with a sonic scream. Really? Are there so many metahumans out there now that powers are repeating? And I say powers and metahumans because I don't see any tech here.