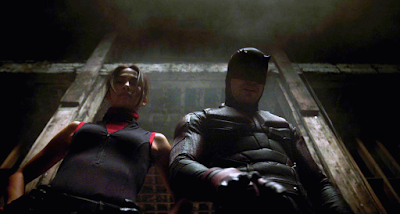 In the last episode of "Daredevil," the Punisher went to trial, from which Matt was absent, Elektra tampered with a witness, and Foggy and Matt had it out finally.  Oh yeah, and Daredevil and Elektra discovered the Yakuza guarding a seemingly mysterious bottomless hole about forty stories deep.  As we open, they're beset by ninjas, and this is only the beginning.

Just before the ninjas nearly take them out, Daredevil and Elektra are rescued by Stick.  Cue opening credits.  As they try to escape by car, wave after wave of ninjas attack.  This is, no doubt, The Hand.  Badly wounded, they go to Matt's apartment where Stick does some wacky holistic voodoo on Elektra to save her.  Then the revelation comes that not only does Stick know her, he trained her. 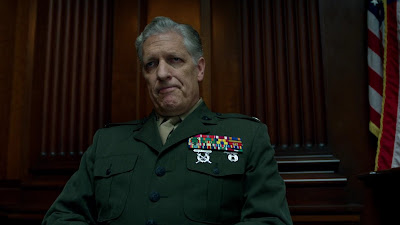 Obviously, Matt doesn't show up for the trial the next day as Frank Castle's former commanding officer takes the stand.  Colonel Schoonover is played by perennial heavy Clancy Brown, formerly The Kurgan, the voice of Lex Luthor, and most recently General Wade Eiling on "The Flash."  He tells a gripping tale of Castle's heroism on the battlefield, adding more pieces to the secret origin of the Punisher. 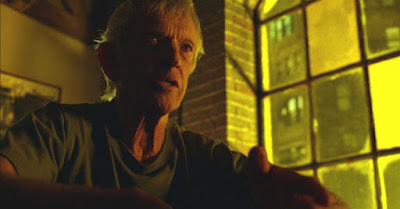 While The Kurgan weaves war stories, Stick tells a tale of a different war, an ancient one involving The Hand.  These 'pieces of shit,' as Scott Glenn's Stick calls them, learned the secret of immortality in ancient times and used it to run rampant over much of Asia and the rest of the world.  They seek power and weapons, specifically something called Black Sky, which Daredevil ran across last season in the form of a child.

The Hand has only one enemy, The Chaste, those warriors trained by Stick to oppose them, to fight them without mercy.  And Elektra is one of them.  Hell's Kitchen is to be ground zero for the battle between The Hand and The Chaste.  Matt treats this tale as a fiction, a power fantasy of Stick's to excuse his homicidal sociopathic behavior.  Unfortunately it's all he's got right now. 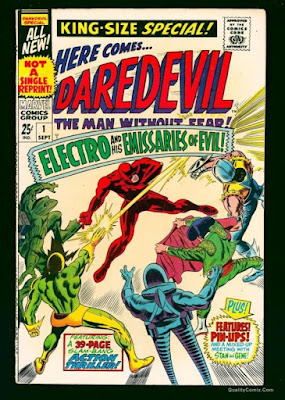 Sigh.  This isn't the Daredevil series I want.  Yeah, it's good, very good, but rather than the Punisher, and Elektra, and The Hand, I think I'd rather have Gladiator, the Owl, the Stilt-Man, hell, even the Jester.  I guess I'm too old school for this stuff.  If they wanted to do a Punisher series (which is already on the schedule) or an Elektra series, why didn't they just do it?

Frank Castle meanwhile is going to take the stand, supposedly in his defense.  Knowing they will need Matt to question him, Foggy sends Karen (perhaps deliberately?) to tell Matt.  She does, and gets a full view of not only crazy old blind man Stick, but also the dying/recovering Elektra in Matt's bed.  Kiss that relationship goodbye.

In court, Matt makes a good case for both a mentally ill Frank Castle and the Punisher as the kind of hero we need, and then Frank starts talking, seemingly prodded by a guard.  Screaming that he's guilty, that everyone he killed deserved to die, and that he'd do it again - Frank effectively buries anything his defense was trying to accomplish. 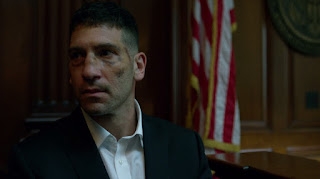 Back home, Matt throws Stick out after convincing Elektra to stay with him, and stop killing.  As soon as Stick makes his exit, a ninja of The Hand attacks and puts an arrow in Matt's chest.  Despite this obstacle, Matt and wounded Elektra finally subdue him.  The arrow made this fight for me, another wonderfully choreographed combat.

And then Elektra kills him.  Just because she can, or wants to.  Elektra has a problem, a bad habit.  It would almost be funny if it wasn't so serious.  She's a killer, a sociopath, a psychopath.  All Stick did was channel her sick energy toward his goals.  I doubt Matt can do the same. 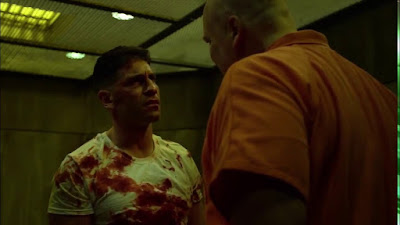 The mic drop of the episode is at the end where the suspicious guard takes Frank Castle through the prison to a gym area occupied by one man.  He turns around and we see him - Vincent D'onofrio as Wilson Fisk, the Kingpin, mentioned several times but unseen since the season one finale.  Cue end credits.  Now this should make things interesting.

I'm ambivalent about the return of D'onofrio and Fisk.  While admittedly one of the most interesting characters and intense performances of the Marvel Netflix Universe, I would like to think his arc is done.  This is television, not comics where villains return every two months.  Still, I'm game to see what happens.

Next: Seven Minutes in Heaven!