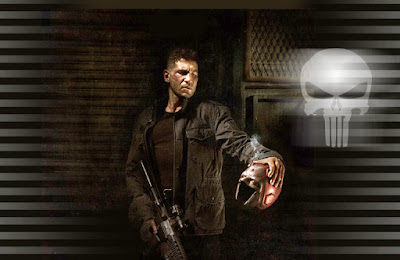 We open this episode of "The Punisher"... um, I mean, "Daredevil," with the arrival of Finn Cooley in New York City. In the Punisher comics, this IRA explosives expert walks around with half of his face blown off, but here he's played by suave Scottish actor Tony Curran, who I know best as Vincent Van Gogh from "Doctor Who," but has quite an impressive career beyond his cool geek cred.

After wrecking his own family's funeral Finn goes on a meticulous and vicious rampage that gets him closer to the Punisher than Daredevil in three episodes. I mean, it's not like it's old hornhead's show or anything. As what's left of the Irish mob leaves Frank's apartment, with his dog in tow, kidnapping it John Wick style, the Punisher watches. Yeah, this is going to be ugly. 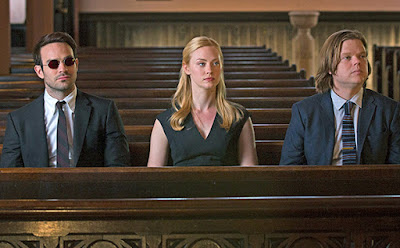 After the credits, Karen goes to pick up Matt, and they share an intimate tie knotting moment, before attending the lonely funeral of Grotto. Also in attendance is Foggy and, returning from last season, Father Lantom. Even though the gigantic church is empty and echoey, Lantom performs the service as if it was full. His sermon reinforces the drives of both Matt and Karen. 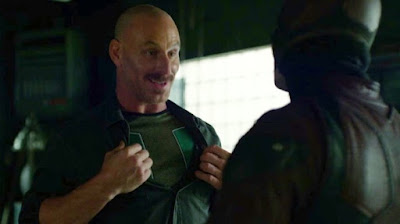 While Karen goes in search of the Punisher, Daredevil pays a visit to Melvin Potter. He's got a new cowl for him as well as gauntlets. He also mentions old contacts are back in town coming to him for weapons but he's turned them down. Melvin is a bit concerned with the hero's well-being, tells him to take care. When DD wishes the same back Melvin replies that he is a reveals the Gladiator chest plate beneath his shirt. Enough foreplay, guys, ditch the Punisher and bring on the Gladiator!

There is a subtle line being drawn in this season so far, and was hinted at strongly in "Jessica Jones," especially in the episode "AKA 99 Friends," that battle lines are being drawn between human and non-human. This all led to Captain America: Civil War and continues in the fourth season of "Marvel's Agents of S.H.I.E.L.D.," but it is interesting that it's rearing its ugly head here in the Netflix corner of the Marvel Cinematic Universe. Witness Officer Mahoney's distinction made between cops and criminals and 'you people' in his brief discussion with Daredevil. 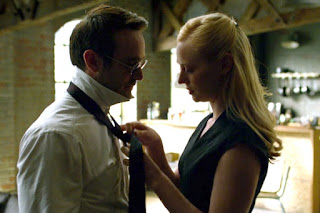 Now you folks who have been following along as I've reviewed "Jessica Jones" and the first season of "Daredevil," you know I write these reviews as I watch them, so my expectations and speculations are sometimes a bit off. There was unfortunately one aspect of this season that was spoiled for me - Karen Page and the Punisher getting together. For me, that makes the brief gentle moments that Karen and Matt keep having both bittersweet and exceptionally cruel. Because of that foreknowledge, I kinda hate them. 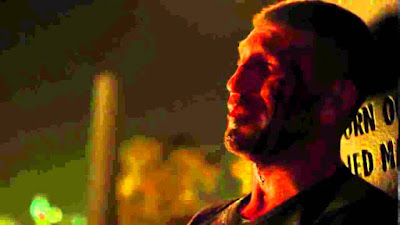 Despite all that, I have to marvel at Karen's ability to track down the Punisher right down to his origins, and even his former family home. This is more than the police, the Feds, or even the Irish mob was able to do - and the Irish were able to take the Punisher down. I joked about the title of this series at the start of this review, but really how much of a hero is the titular hero when he's so ineffectual and supporting cast and B level bad guys show him up so easily?

With Finn, it's quite a character reveal that with much of his family dead, including his son, at the hands of the Punisher, that what he really wants once his prey is in his grasp, is his money back. The Punisher apparently stole millions from the IRA, and Finn is going to get it back even if he has to drill his point home. Frank gets one point for compassion when he gives up the location of the money after Finn threatens his dog. I still don't like the character. 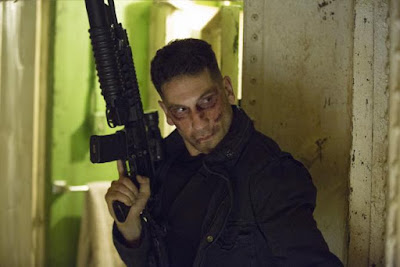 I did like the subtle stealth and almost casualness with which Daredevil attacked the Irish mob's hideout. It was like he was taking a walk in the park, with his eyes closed - and I guess with Daredevil, that's almost a given everyday. Unfortunately after that however, it falls apart. Rather than letting Daredevil rescue the Punisher, the showrunners give the latter some sort of weird precognition that allowed to know what the Irish were up to, so he rigged his van with the money to explode, and sewed a razor blade into his arm for later. Holy Shark Repellent Bat-Spray! 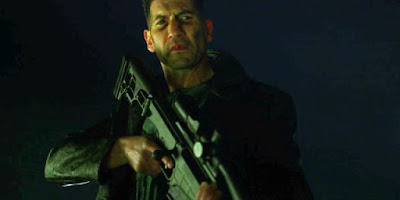 Daredevil and the Punisher escape from the villains' lair like they're buddies in a seventies issue of The Brave and the Bold. They have a little after party in the cemetery, with Frank opening his heart to DD about the rhyme he says before he kills people. The episode title references it and the tale he tells is one of tragedy that many veterans of war know. Has our hero forgotten about all the people this villain has killed? All the horrible things he's done, all the crimes he's committed? Again props to Jon Bernthal's performance, but he is still the bad guy... why has DD forgotten that?

He hasn't. And when the police arrive, thankfully Daredevil does something heroic. He allows the police to take the Punisher in, specifically Officer Brett Mahoney, and makes sure he takes the credit in an attempt to clear any blurred lines he may have caused with the police. I'm just surprised the Punisher went in without a fight. 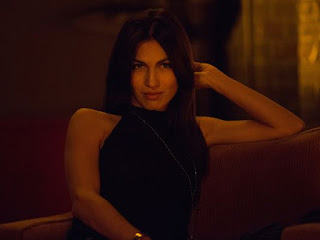 The episode almost ends with more gentle moments with Matt and Karen, and most significantly a very sensual kiss in the rain that both reminded me of, and consciously tried not to be, the kiss in the rain from the 2003 Daredevil film. I know that kiss is with Elektra and this one is with Karen, but Deborah Ann Woll is very Elektra here... which is a shame because the real thing is waiting for Matt when he gets home...