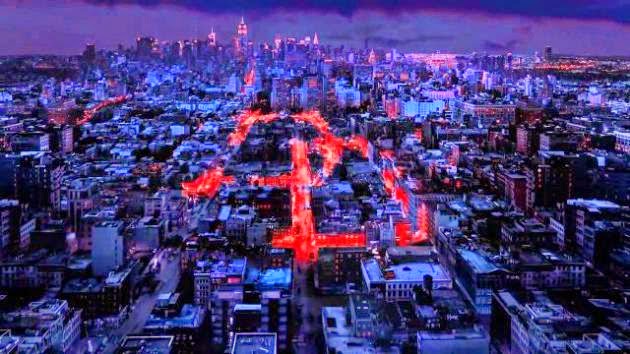 Turk Barrett, or just plain Turk, is not just a fixture in the Daredevil mythos, but also in Marvel Comics New York. He is the underworld everyman, every bad guy default henchman, the street tough with connections - but who ultimately posed no threat. He's worked for the Kingpin, the original Fixer, and Mister Fear among others, stolen and worn super-villain armors, and fought the likes of Iron Man, the Punisher, the Black Panther, Night Thrasher, and Daredevil. 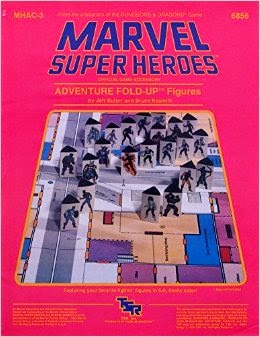 My first exposure to the character was in the first Marvel Super Heroes role-playing game from TSR back in the eighties. The game did not have metal figures to place on combat maps like many RPGs of the time, instead there were cardboard fold-ups. There were well over one hundred of them, depicting the major super heroes and super-villains of the Marvel Universe, and Turk was one of them. Yeah, apparently he was that important. 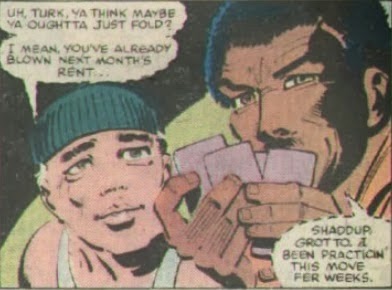 The first time we see Daredevil in action in episode one, "Into the Ring," Turk is there, as a matter of fact, he's the guy taking the biggest beating. Here, as in the comics, 'crime does not pay' is a saying that Turk never remembers. At the end of that episode, we see him getting a second chance selling guns, and that's where we find him here, selling his guns. One of them falls into the hands of an assassin set to throw the Russians into chaos. 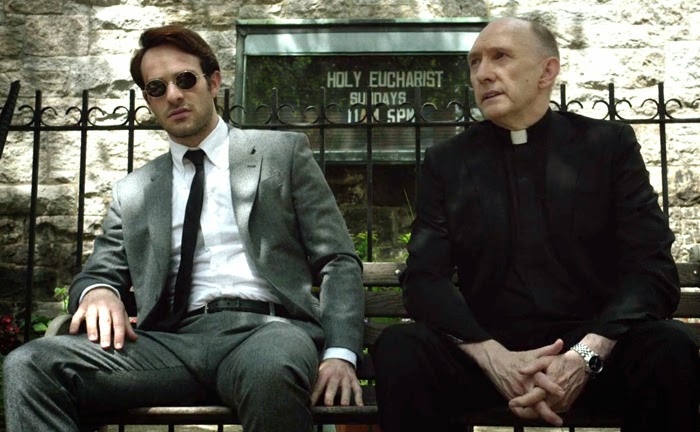 There are lots of connections in this episode, and Turk is really the least of them. Matt takes a moment to talk to the priest from the first episode outside the St. Agnes church. His name is Father Lantom, who has appeared in the Runaways comic, and the church is the same one where Skye was found as a child in "Marvel's Agents of S.H.I.E.L.D." It is all connected.

Also more important than Turk, or Lantom or St. Agnes, is the first appearance of reporter Ben Urich. The character has switched races, much like Heimdall in Thor, and also switched allegiances of his profession. Because of the whole Marvel/Sony/Spider-Man thing, Urich can't actually work for the Daily Bugle here on "Daredevil," but has to write for the New York Bulletin instead. That's okay though, that's easier to deal with than Ant-Man and the Wasp not being in the Avengers at least… 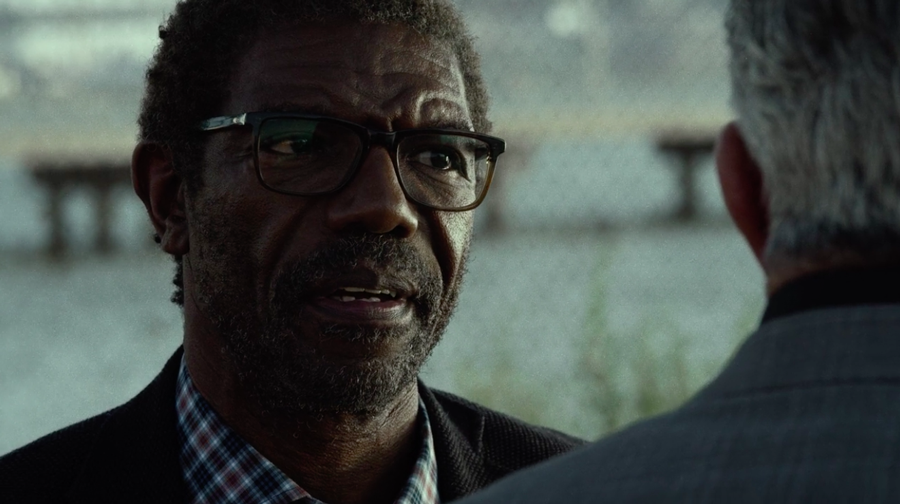 Vondie Curtis-Hall is no Joe Pantliano (from the Dardevil movie) in the role of Urich, but he is a pro, a great character actor that folks most likely know from "Chicago Hope." His wife is the brilliant Kasi Lemmons, the director of The Caveman's Valentine, Talk to Me, and one of my absolute favorite films, Eve's Bayou. His portrayal lends a very cool and very real vibe to the show that reminded me in a good way to "The Wire." Yes, I said it, "The Wire." 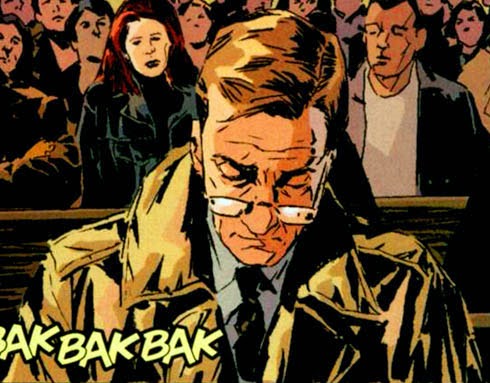 In the comics, Ben Urich works frequently with Daredevil, Spider-Man, and the Punisher, and his investigations have exposed the identities of several heroes and villains, Daredevil and The Kingpin among them. Vondie Curtis-Hall kicks up the quality of this character, and I'm looking forward to more of him in this series. I feel for him, and his ailing wife. My heart breaks as a writer knowing that his wife's hospital care are definitely aiding his decision between his passion for journalism and keeping his job. Writers need to follow their bliss, to quote Joseph Campbell, but Urich is chained by his hard reality.

Much of the episode revolves around Wesley hiring Nelson and Murdock after an assassin murders Prohaska in a bowling alley with one of Turk's guns. It's a test. Let's see what they're made of, what they can do, if they are dangerous - it's what the big bad is thinking. Maybe we'll need a lawyer sooner or later. Karen is shuffled off to a subplot where she's asked to sign off on not talking about what Union Allied tried to do but can't. There's more to this, and her, than meets the eye. 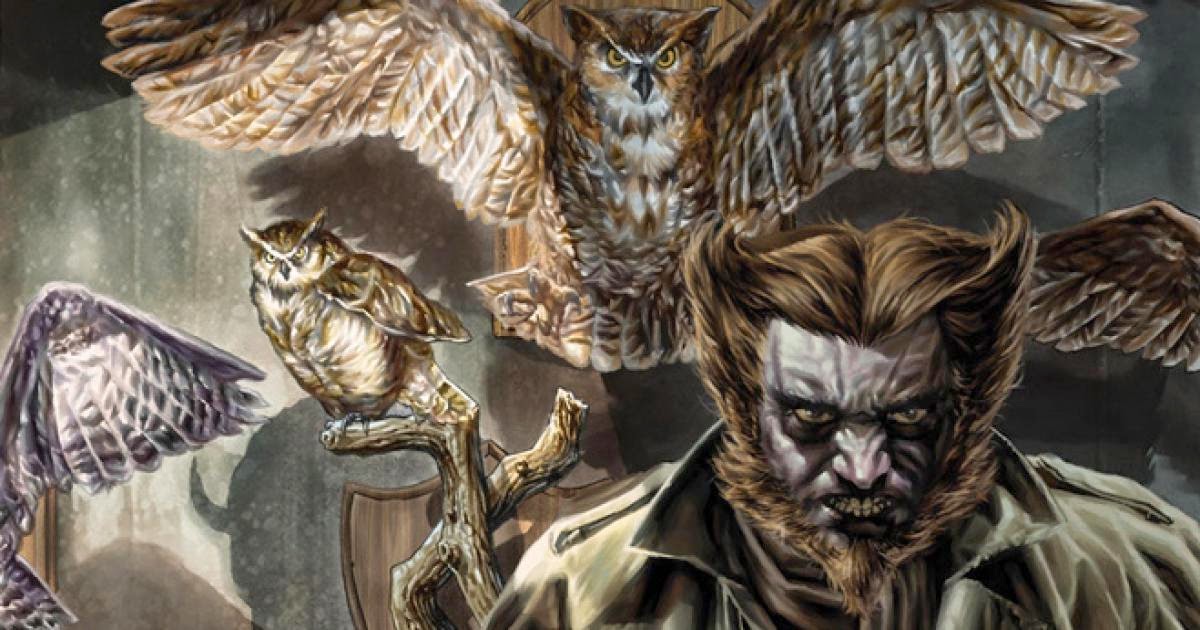 There is a very nice juicy scene between Wesley and Leland Owsley. I can see the beginnings of The Owl here, his mannerisms, etc. This could be very very good if they go in that direction. With a second season just announced, would they use The Owl as a baddie, or go right to Elektra? I suppose it's sadly unlikely. The Owl became a forgotten character, as opposed to daredevil arch-foe when Frank Miller, Kingpin, Elektra, and Bullseye all took center stage. We Silver Age Marvel Comics readers can dream though, can't we?

There is great use of Matt's powers while trailing Wesley and in the courtroom later. There's precious little fighting or even Daredevil in this episode, but everything else is so good one doesn't notice. That said, I hope that what we have seen the past two episodes - the "Kung Fu" move of only having action in the last five minutes - will not become the pattern. 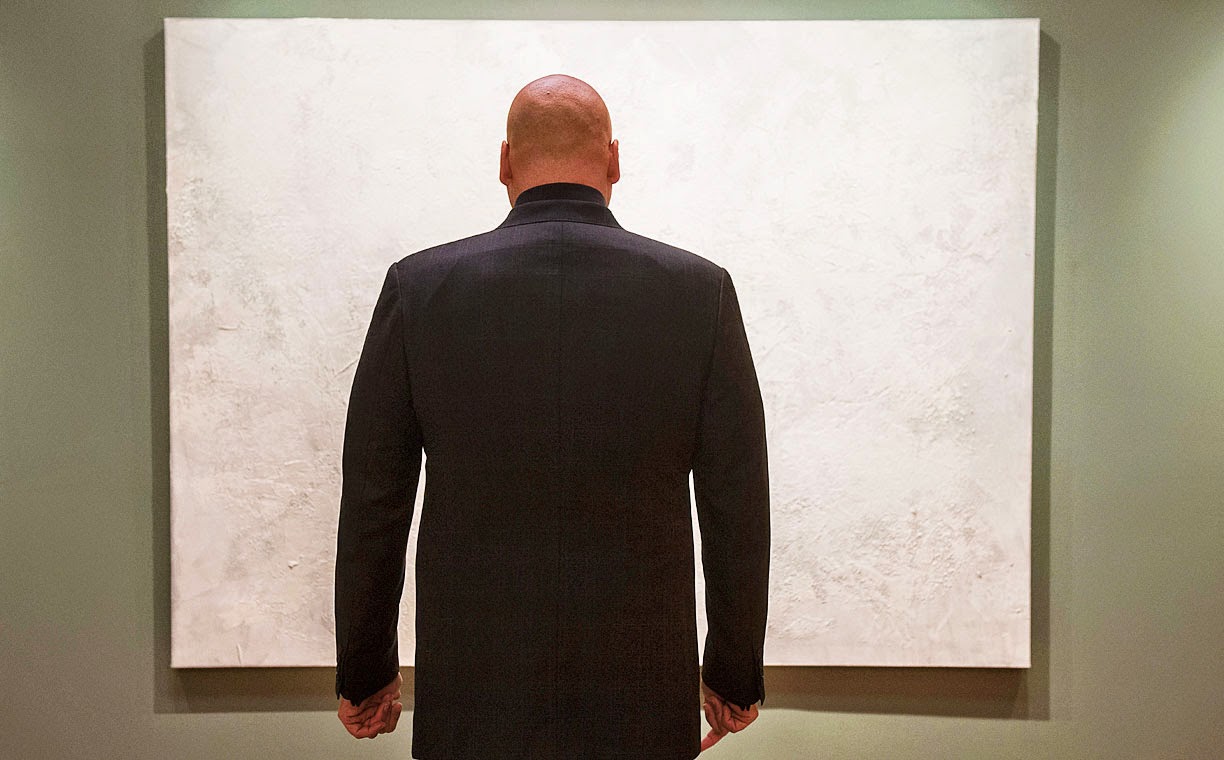 Speaking of endings, we not only finally get a name for our big bad, Wilson Fisk, but we see Vincent D'Onofrio's Kingpin as well. We see him admiring a stark white painting, where we get the title of this episode, and beginning his romance with a woman, who in the comics will become his wife. D'Onofrio's Fisk is childlike, with a sense of menace, frightening indeed. I think I am going to dig him very much...