The big cliffhanger last time on "Arrow" was the seeming death of Thea at the hands of R'as Al Ghul. This was obvious the Demon's endgame in getting Oliver to do what he wants. And what does R'as want? He wants a heir, similar to his motives as a Batman foe, but some things have been unclear.

R'as indicates he's been the Demon's Head for hundreds of years, but never comes right out and says he's immortal. If he's immortal why does he need an heir, and why imply this transition has occurred before? The "Arrow" showrunners have been very careful not to use the proper term from the comics of R'as' resurrections - the Lazarus Pit. Instead, they have implied he has access to waters that heal, a fountain of youth if you will. They break that rule this episode. 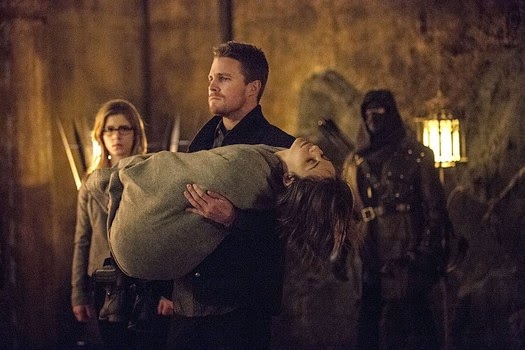 We open on Oliver finding Thea, rushing her to the hospital, where they can only stabilize her to a vegetative state, comatose, dying slowly. When he sees Maseo signaling a meeting, Oliver is told that R'as will revive Thea, if Oliver takes his place as heir to the Demon.

When he discusses the choice with Team Arrow, Malcolm explains about, and uses the term, the Lazarus Pit, for the first time. It can rejuvenate, and restore the dead to life, but he warns that the one who is lost is not the one who comes back. They are changed, in their soul. Whether it works or not, Team Arrow is going to Nanda Parbat. 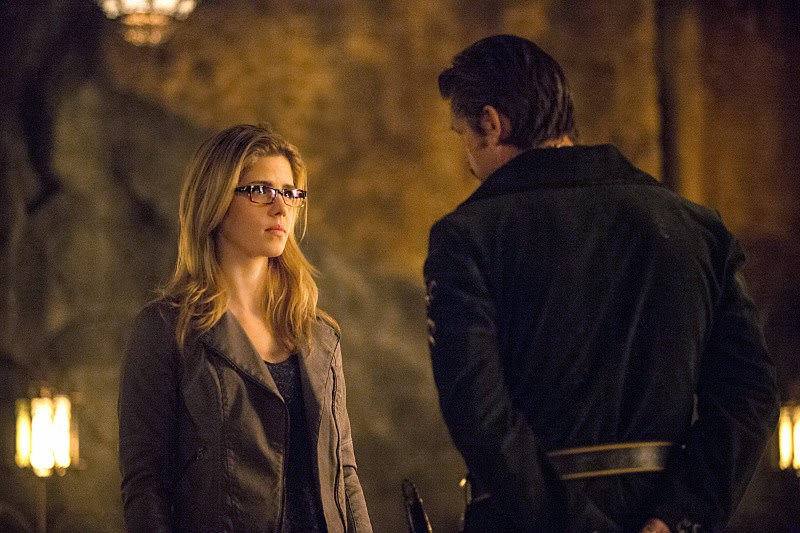 After a teary breakup and goodbye between Ray and Felicity, and terse words between Oliver and Malcolm, Team Arrow is off, assumedly with the Atom watching over Starling just in case the super-villain of the week is on schedule. It's notable I think that after she breaks up with Ray, Felicity boards the plane with her hair down, as she previously had for Barry and Ray, as opposed to up, as she usually does with Oliver.

The brief encounter between Diggle and Maseo is intense and telling, especially between two fathers and friends of Oliver. It is character moments like this, that stand above the soap stuff, and elevate "Arrow," and there have been damn few this season.

My first encounter with R'as Al Ghul in the comics, from Batman #244, which I've talked about before, also featured an emergence of R'as from the Lazarus Pit. The Demon was enraged, mad, violent, and possessed of superhuman strength. I was impressed to see that version of the Pit's effects carried over to the TV version. If only momentarily, Thea is a crazed animal, followed by confusion.

And then... "so that happened." After confronting and threatening R'as, the Demon tells Felicity she needs to tell Oliver how she feels before it's too late. She does, and what we've been waiting for for so long happens. Ollicity consummated. I'm glad it happened finally, and was done so well and tastefully for TV, but one thing really irks me. It happened because R'as pushed Felicity. There's just something both wrong and icky about that.

As if making love to Oliver wasn't insane enough, what Felicity does next is totally cray-cray. She drugs him into unconsciousness and tries, with the help of Team Arrow, and Maseo, whose chat with Diggle weighed on his soul, to smuggle him out of Nanda Parbat. Oliver wakes up however and puts a stop to it. And same old one-night-stand stubborn Ollie sends them on their way, while he stays, ready to be transformed into Al Sah-Him, heir to the Demon.

The parallel storyline in Flashback Hong Kong involves Oliver, Maseo, and Katana trying to stop General Shrieve from attacking China with a deadly bio-weapon. Like a Superboy story from the 1950s, this is a flashback that doesn't hold much bite. Just as we know Superboy grows up to be Superman, we know China isn't hit with a bio-weapon. I was also amused by all the gunplay in the one chase scene - no one involved appeared to be able hit anything, it was like everyone was a Stormtrooper. No real cliffhanger there.