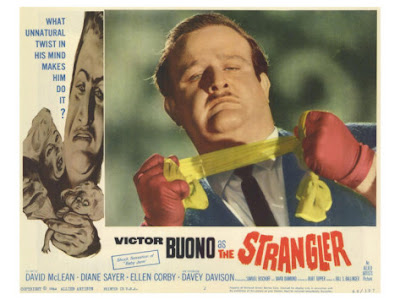 The Strangler ~ Rather well done for its day, this 1964 crime thriller might seem dated by today's standards. It was designed to exploit the real life Boston Strangler killings but then relocated and altered to distance itself from the case.

Held back by a sad cast, and reportedly the director Burt Topper as well, Victor Buono still rises to the top as the mother and doll obsessed serial killer. He appears to be the only one acting among a crowd of cue card readers.

Had it not been for the lackluster cast, and the uneven score, this could have been a movie on par with Psycho or The Boston Strangler, but it fails to even be a good exploitation flick, despite Buono's performance.