Over on The GAR! Podcast, as part of the Robin Renee Blog Tour, Ray and I interviewed Robin for about a half-hour or so. One of the things that came up in conversation was transformative moments in music on "Saturday Night Live." 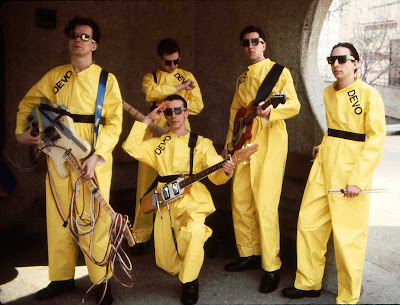 In those early seasons of the program I was exposed to many new musical experiences that shaped and influenced how I perceived music, and in the growing punk and new wave atmosphere of the late 1970s, "SNL" was full of new musical experiences. Both Robin and I were affected by an appearance by David Bowie. Ray talked about seeing Fishbone, although much later. I remember being amazed by Patti Smith, Elvis Costello, The Specials, The Clash, the B-52s, Gary Numan, and yes, DEVO.

I wouldn't be as hardcore into the band as I was later in the Freedom of Choice and New Traditionalists years, but the visuals and sounds stayed with me. I was especially drawn to their cover of the Rolling Stones' "(I Can't Get No) Satisfaction," and that it did what all covers should seek to do, overtake the original. I still to this day feel the DEVO version is superior to the Stones'.

Don't forget to get over to garpodcast.com, and listen to the Robin Renee interview, and go to Biff Bam Pop! tomorrow for the next stop in the Blog Tour.